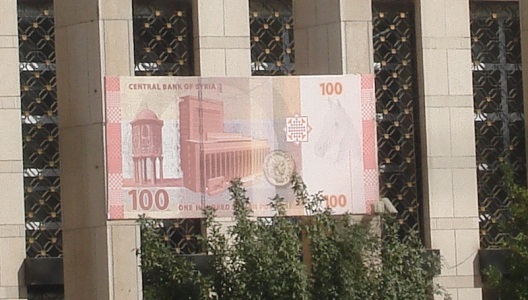 Many observers have dubbed the conflict in Syria (and rightly so) an international one, as regional and global powers compete through direct and proxy actors on Syrian territory. Their different forms of intervention has both shaped and transformed the Syrian revolution, which started with local protests in March 2011 as a rejection to the untenable status quo. Among the many grievances that galvanized protestors, their deliberate exclusion from economic opportunities featured prominently in demonstrations throughout the country. The entrenchment of crony capitalism among the regime’s inner circle, or regime businessmen, became the predominant characteristic of the Syrian political economy. Since 2000, when President Bashar al-Assad came to power, the wealth of those business families grew substantially following the deal to replace the influential old guard who served under his father Hafez.

Contrary to conventional wisdom that Alawite minorities—the same sect of the ruling Assad family—benefitted the most from Bashar’s presidency, some Sunnis also profited greatly at the expense of other Syrians, regardless of religion, sect, or ethnicity. The same clique of businessmen took ownership of and partnered in lucrative projects in property development, telecommunication, tourism, and industry. This phenomenon manifested in the then-newly privatized banking sector, attracting many of those same businessmen to enjoy high returns by becoming principal investors in multiple competing banks. Until 2003, the state had monopolized the financial system following the nationalization of private banks in the 1960s with six state-owned banks providing both retail and institutional banking services.

As part of the regime’s plan to move to a more liberal market economy (the Assad regime labeled it a social-market economy to avoid alienating its hardline socialist base), it aimed to attract international banks to develop the archaic banking and financial system. Economics did not trump politics in Assad’s Syria, which remained hostile to US policies in the region under the rubric of “resistance,” alongside Iran and Hezbollah. Its decision to liberalize the banking sector coincided with the US-led invasion of Iraq in 2003 that Syria vehemently opposed and later worked to undermine. Concurrently, the United States felt increasingly uncomfortable with brazen Syrian interference in Lebanese domestic politics, culminating in Syria’s alleged assassination of Lebanon’s Prime Minister Rafik Hariri in February 2005. Hopes that Syria under Bashar would join the pro-Western camp quickly faded and resulted in increased international isolation.

The unfavorable geopolitical climate pushed the Syrian regime to seek largesse from Turkey and the resource-rich Gulf countries, especially Qatar and Saudi Arabia—all of which later became Assad’s sworn enemies. Between 2005 and 2011, Syria witnessed a windfall of foreign capital primarily from Gulf, which began investing billions of dollars in property, tourism, and the financial sector. Prominent Gulf corporations and businessmen—especially from the United Arab Emirates, Qatar and Kuwait—became partners in many big-ticket projects spanning landmark hotels, resorts, and residential and commercial developments worth more than $20 billion with Syrian businessmen, some of which were close to the Syrian regime. Following the onset of protests in Syria, many Gulf companies and investors suspended their operations as violence spilled over into areas adjacent to their assets. Some of these real estate projects were still under construction or located in conflict zones, justifying an immediate decision to suspend them. Others divested following the decision of the majority of the Gulf Cooperation Council (GCC) countries in late 2011 to isolate the Syrian regime, cut their diplomatic ties, and impose sanctions when it became evident that the regime had dismissed pursuing a genuine political solution.

Surprisingly, the fourteen private banks in Syria—subsidiaries of Qatari, Kuwaiti, Emirati, Bahraini, Lebanese, and Jordanian banks—did not follow their respective governments’ approach, remaining open despite the operational and security challenges. Some countries even increased their investment in these subsidiaries. Four years after the start of the Syrian uprising, all fourteen private banks still operate within the country, albeit on minimal basis and concentrating their operations in government-held safe areas. They have severely scaled back their banking activities and shifted their operations to recovering retail and corporate loans for the past three years.

Pragmatically, the banks’ have chosen to protect their initial (and even expanded) investments by accommodating the Assad regime’s tight control over capital and limiting foreign exchange outflows. Their continued operation reflects the anticipation of enormous opportunities after the ultimate resolution of the conflict. While forced to adapt to new and dynamic operational risks, their previous development and infrastructure financing make these banks a natural counterpart in the nationwide reconstruction program when the war ends, the potential profits of which outweigh the prospects for an exit from the country.

For now, however, these banks have struggled to reduce the soaring rate of defaults on non-performing loans (NPL) by both retail and institutional clients. Banking experts estimate that NPL ratio by privately owned Syrian banks was 7.5 percent by the end of 2011, rising further 21.5 percent at the end of 2012, and to a whopping 43 percent by mid-2013. In the past four years, bank ownership has changed after several local and foreign investors, both institutional and retail, have decided to divest from the banking sector for either economic or political reasons. Yet despite the severe operational, political, and security risks, others have nonetheless continued to pursue investment in the ailing sector. Consolidation of banks’ ownership will slowly continue without any substantial change to its structure, as most major divestment decisions already took place in the first three years of the conflict.

As the war drags on in the absence of a viable political solution, the Syrian economy will continue to disintegrate and metastasize into a war economy. The emerging asymmetry between the relatively safe government-held areas and the conflict-ridden territories outside regime control will allow the resumption of basic business activities in the former while hampering any form of sustainable recovery in the latter. The Assad regime will try to display an air of normalcy in its territory by announcing new development and reconstruction projects, but the lack of substantial external financial assistance will make this task harder to achieve. In the wake of depleting foreign cash reserves, the collapse of export revenue, and increased sanctions, the banks will have to wait much longer before they see a return on investment.

Rashad al-Kattan is a political and security risk analyst, and a fellow with the Centre for Syrian Studies (CSS) at the University of St. Andrews. He recently completed his research on the Syrian financial sector, titled Mapping the Ailing (but resilient) Syrian Banking Sector.

Image: Placard of a Syrian banknote outside the Central Bank of Syria, November 2010. (Photo: Sabahrat/Wikimedia)