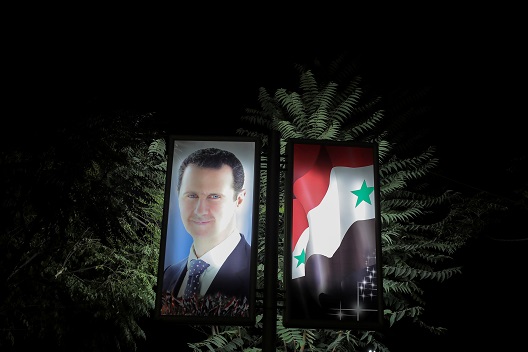 Eight years ago, a very quiet American peace mediation between Syria and Israel was showing promise. Territorial disputes long dividing the parties were being resolved. Security issues key to a genuine peace were being tackled. The fact that months of shuttle diplomacy had not leaked suggested the parties were serious. Had the mediation continued, both Israeli Prime Minister Benjamin Netanyahu and Syrian President Bashar al-Assad would likely have faced a choice by year’s end: inform their respective citizenries that mutually agreed terms of peace had been arrived at; or scuttle everything. Alas, we will never know what those choices would have been.

Eight years ago, the President of the Syrian Arab Republic, confronted with peaceful protests against the brutality of so-called ‘security forces,’ authorized the use of deadly force. Bashar al-Assad, the former head of the Syrian Computer Society, either did not know or did not care that the images and sounds of mass murder by rioting, state-employed gangsters would be transmitted everywhere in Syria and around the world. Unlike the massacre of Hama in 1982, slaughter in Deraa in 2011 could not be hidden.

Shocked by the revelation that their young—and, for many, still promising—president had such contempt for their safety and the dignity, Syrians around the country rose in peaceful, non-sectarian, patriotic protest. Assad’s legitimacy—based largely on the widespread hope that he would eventually cleanse and reform a governing system characterized by corruption, incompetence, cronyism, brutality, and unaccountability—vanished instantly.

Along with Bashar al-Assad’s legitimacy, the prospect of Syria recovering the land lost by his father—Minister of Defense Hafiz al-Assad—to Israel in June 1967 evaporated. No way would Israel negotiate with a man who, in the end, chose to be president of a clan, an entourage, and a captive government; someone who had forfeited his standing to speak for Syria and Syrians on matters of war and peace. The Obama White House, transfixed by the violence engulfing Syria and (at the top) lukewarm about Israeli-Syrian peace, made no attempt to warn Assad that he was killing Syria’s chances to recover lost territory.

Eight years of vicious internal armed conflict—the result of Assad militarizing and sectarianizing the uprising with the destructive collaboration of regional powers seeking to end his rule—have left Syria in ruins. And nothing that has happened in Syria has stayed there.

More than a quarter of the pre-war population has fled the country in terror. Another quarter is internally displaced. European politics were undermined destructively and perhaps decisively by a massive migratory wave in 2015; 60 percent of which was Syrian. ISIL (ISIS, Islamic State, Daesh) and al-Qaeda took root in Syria courtesy of the toxic collaboration of Assad (needing enemies who could bolster his claim to fighting terrorism) and sectarian donors in regional states wanting Assad dead. Throw in the stubborn refusal of the Obama administration to protect a single Syrian from the mass murder survival strategy of the regime, and the result is a failed state needing $400 billion just for physical reconstruction, and legitimate, competent governance to make it happen.

And all of it was unnecessary; all of it. A stronger person in the Syrian presidency would have reached out to protestors politically before authorizing deadly force. A real leader at the top would have conciliated and compensated frightened parents whose teenage children were victims of police brutality. A wiser head in the presidential palace would have kept his eyes on the prize: peace with Israel and the recovery of occupied territory.

Whether Bashar al-Assad decided on his own to betray Syria or was shamed into it by thuggish security chieftains is an interesting, but irrelevant question. The failure was his and his alone. And for the rest of his life he will be vulnerable to prosecution as a war criminal and mass murderer; someone who routinely visits mass destruction on unarmed civilians and their property; someone who oversees a detention system employing Nazi-like methodology and even accounting; someone who has deliberately denied food and medicine to millions of Syrian children and their parents.

It is fashionable now to declare Bashar al-Assad the ‘winner’ of Syria’s ‘civil war.’ Yet the underlying causes of the revolution remain unaddressed, with Assad and his entourage singularly unqualified and unable to address them. Large tracts of Syria—including the areas richest in agriculture and petroleum—remain beyond his grasp. And unless China has money to burn on reconstruction projects to which regime kingpins would attach themselves like leeches, no country subject to taxpayer accountability would put anything but humanitarian aid into Assad-controlled parts of Syria.

Iran, currently governed by thieving clerics covering their larceny with their expansionist Shia version of Islamist extremism, is well-satisfied with the provisional survival of its Syrian client. Tehran has reduced the president of a nationalistic Arab country to complete dependency on it and on its Lebanese arm, Hezbollah. Iran hopes to open in Syria a second anti-Israeli ‘resistance front,’ one in which Hezbollah can do to Syrians what it has done to Lebanese: jeopardize and sacrifice their lives for the sake of ‘liberating Jerusalem,’ a Potemkin campaign fueled by narcotics sales and money laundering.

Some Russian officials, on the other hand, understand quite clearly the meaning of an Assad ‘victory:’ the continued presence in Syria of a rapacious clan and entourage milking what it can of a Levantine North Korea; a place from which anyone with a modicum of talent and decency will want to leave; a family crime enterprise that will drain the Russian Federation for as far as the eye can see.

Yes, the survival of Assad gives Russian President Vladimir Putin bragging rights about the supposed return of Russia to great power status; something to distract the masses from world-class corruption and chronic misrule. But others in the Kremlin and its associated ministries know that the miserable, murderous regime they have saved cannot promote Russia’s interests or its image in positive or sustainable ways. They look at this ‘victory’ as did Shelley’s traveler in an antique land, regarding the “shattered visage” and words of King Ozymandias half sunk in the sand:

Look on my Works, ye Mighty, and despair.

Nothing beside remains. Round the decay

Of that colossal Wreck, boundless and bare

The lone and level sands stretch far away.

Eight years of war have indeed produced decay and a colossal wreck. Eight years of war have, in the forms of Islamist extremism promoted and sustained by Assad state terror, created security threats to all of Syria’s neighbors, to American allies in Western Europe, and to North America itself. President Donald Trump seems to have been dissuaded by his advisors from making a gift of American leverage to adversaries and enemies of the United States. Iran, al-Qaeda, Assad, ISIL, and Russia all want America gone from Syria. They know that what happens in Syria will not stay in Syria. They count on the overflow to endanger the West and, ideally, to break NATO. We accommodate these malign forces at our peril.

Ambassador Frederic C. Hof is Bard College’s Diplomat in Residence and a distinguished senior fellow of the Hariri Center.