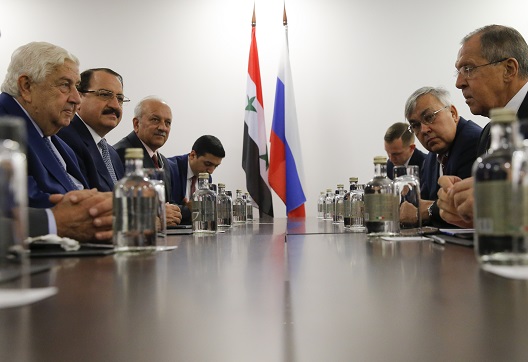 On December 11, Vladimir Putin declared the beginning of the end of Russia’s involvement in Syria, and proclaimed his “victory” from the Russian base of Hmeimim. In the same speech, he indicated that the conditions have been met for a political settlement of the Syrian war.

Of course, none of these declarations bode well for Syrian President, Bashar al-Assad. Were we to take them at face value, although no one will, they would imply the reduction, if not the end, of Russian military support to the Assad regime. They would lead to Moscow’s active lobbying to bring Damascus to negotiate a political solution.

Putin’s declaration, though, shows that he feels he is winning the Syrian game, but his next moves will tell whether or not he can out maneuver all the other players. Doing so would require balancing conflicting interests between Iran and Russia’s newer allies; Saudi and Turkey in particular. It would also require unraveling complex problems such as Turkey perceiving an existential threat in the growing Kurdish presence. The West still wields considerable influence in the region, despite taking a back seat and allowing Russia to lead on the military and diplomatic fronts.

For months now, commentators have agreed that the Russians are the master of the game in the Syrian conflict and its potential settlement. Indeed, their military intervention starting in September 2015 enabled them to sustain Bashar al-Assad’s regime and allowed him to regain control over almost two thirds of the country, thanks, in fact, to the critical support of Hezbollah and Shia militias. The man of Damascus is under Russia and Iran’s full supervision, his country is in ruins, Syria has become a playground for all sorts of foreign military units, Assad’s authority only extends to a maximum of around ten million Syrians (out of a population of 21 million in 2011), but the perception is there: Bashar has won.

More importantly, the Russian intervention, far from alienating the opinions or leaders of the countries of the region, has considerably raised Russia’s status in the Middle East.

The Syrian war, despite fomenting some day-to-day disagreements, has allowed Russia to build a strategic relationship with Iran, one that is progressively starting to look like an alliance. President Putin has also managed his relationship with Turkey brilliantly, as the country has become a strong ally for Moscow. Thanks to this “Turkish connection,” Russia liquidated Aleppo last year and launched the Astana process. Putin has also become the “justice of the peace” between the Turks and the Kurds in the northern part of the country. The Russian intervention has also reinforced Moscow’s influence with Israel. Today, President Putin is seen as “regulating” Israeli strikes against Hezbollah and Iranian positions in Syria.

Even outside of Syria’s immediate periphery, Russia’s influence has grown. Despite their initially conflicting positions on the Syrian issue, Putin has improved his cooperation with Saudi Arabia, as illustrated by King Salman’s historic visit to Moscow. Through Saudi diplomacy, the Riyadh II platform was organized in late November which allowed the integration of loyalist groups known as the “Moscow” and “Cairo” groups into the opposition following Russia’s suggestion.

US President Donald Trump’s benevolence and the availability of his administration to work with Russia on a case-by-case basis (“de-escalation” in the South, “deconfliction” in the East), as well as his influence over other states of the region, especially Egypt, are important assets to the Russian president.

Under these circumstances, it seems surprising that Bashar al-Assad’s regime continues, as it recently did in Geneva in mid-December, to radically refuse to negotiate with the opposition, and that Moscow is unable to twist his protégé’s arm. One way to understand this would be to consider Iran’s influence, since the regime’s other sponsor encourages Assad to resist. Indeed, it aims to strengthen its own role in the process and is also probably motivated by more strategic factors, such as buying time to further entrench itself in the country. The question now arises about the extent to which the Iranian protests might weaken Tehran’s regional policy.

Will the Sochi Meeting Take Place?

Another explanation is that Russia’s deadline is not the Geneva meeting, but the Sochi meeting. Postponed several times, the Sochi meeting includes discussing the “Syrian national congress,” and is now rescheduled for February; a few weeks before the Russian elections. The Russians believe that they will be the deus ex-machina in Sochi; to control the regime’s delegation, define the agenda and the work methods, and lead the discussions towards conclusions to their benefit. The Russian agenda is well known: the formation of a mixed government, the drafting of a new constitution, elections, etc. Western governments, as well as the opposition, do not really oppose these ideas, many of which have been taken (selectively) from UN resolutions. If there are some doubts, it is about implementation modalities: How does the transition work? Which procedure should be followed to develop a constitution? Which elections are we talking about? Can Assad run again?

A number of uncertainties remain regarding the Russian-held Sochi meeting: can the United Nations really abdicate its role to this extent and allow Russia to lead? Will the Syrian opposition, now credibly organized around a “national negotiating committee,” agree to participate in this inter-Syrian conference? How would the negotiations be impacted by the pursuit of a military operation from the regime and its sponsors, in Eastern Ghouta and the Idlib province?

No matter what, it might be useful to assess the impacts of Sochi or a similar conference. There is, of course, the question of the exercise of power in Damascus. The opposition has greatly reduced its demands but remains committed to the idea of ​​a transition. On the other hand, the Assad regime can only consider superficial measures and at most a “reconciliation,” leaving the entire system in place. The United States and its allies should pay attention to the opposition’s ability to hold its position: by putting an end to all support to armed groups, by surrendering to Russia a political process that should be led by the United Nations, or by allowing the siege of Eastern Ghouta to take place without reacting; the West has convinced the opposition that there is nothing to be expected from foreign stakeholders, except from the Russians.

Another type of issue relates to the interests of regional powers, in particular Turkey, Iran and Israel.

Turkey has been reluctant so far to attend Sochi because the Kurdish Democratic Party (PYD), the Syrian branch of the PKK, the former which is an ally of the West against the Islamic State (ISIS, ISIL, Daesh), will be invited. Yet, for Sochi to be a success, an agreement giving the Syrian Kurds a form of autonomy compatible with Turkish interests must be found. Should it be an autonomous, but demilitarized Syrian Kurdistan? The Syrian regime undoubtedly dreams of taking the Kurdish cantons back. The PYD would thus be very foolish to surrender its defense capacity. Moreover, what would the perimeter of such a territory be?

However, the question that arises is less about the vision but rather strategic interests. Trump’s America, and his Saudi and Israeli allies even more, want to put an end to Iran’s influence in the region. Saudis and Israelis perceive the current Iranian posture as a major threat. The Russians hint in confidential talks with Western officials that they are the only ones capable of really “containing” Iran. But how? If Russia really wants to reduce its involvement in Syria, it will leave an opening for Iran to take more space, which in turn will require an Israeli reaction. If the current balance between Iran and Russia stays as it is, Russia will remain accountable for Iran’s behavior to the Israelis. All this, however, still depends on the Iranian internal situation not affecting its role on the regional stage.

A Possible Way Forward for the United States and Their Allies

What should we conclude from this analysis regarding the positioning of Europeans and Americans?

It is crucial that the capitals concerned become more proactive and play their cards right. The real leverage for the West is not, as it is repeated everywhere, the future “reconstruction” of Syria, about which the Russians are only marginally concerned. It rather lies in the geopolitical trump card the West still holds. First, it could indeed regain influence with the opposition. Second, by reaffirming its military presence alongside Syrian Kurds, Washington and its allies should appear as the real interlocutors capable of finding a solution to the Turkey-Syrian Kurds equation. Third, the West potentially wields influence on the delicate balance of powers between Iran, Israel, and Saudi Arabia; influence that goes beyond Russia’s current operational role.

At the end of the day, Turkish, Iranian and Israeli interests—but other countries’ interests (Saudi Arabia and Jordan first)—can only be dealt with by international guarantees. The Russians would be making a big mistake were they to think their current capacity, admittedly remarkable, to “speak with everyone” could alone guarantee a regional balance. A specific international conference will be needed to address the issue of regional balance. One can therefore imagine that after a Sochi meeting, whose relative success would have been partially ensured by them, Western countries could make Moscow a proposal to set up a “Dayton” type meeting (at which the peace agreement reached in 1995 lead to the end of the Bosnian war). It should gather the five permanent members of the Security Council, plus Germany, as well as Syria’s neighbors, in order to elaborate on the international guarantees needed for any peace agreement in Syria.

Ambassador Michel Duclos is senior advisor to the Institut Montaigne and a nonresident senior fellow at the Atlantic Council’s Rafik Hariri Center for the Middle East. He formerly served as French ambassador to Syria and has held a number of senior diplomatic positions throughout his career.