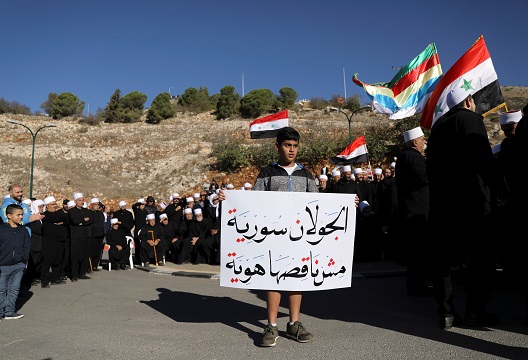 In mid-November 2018, the United Nations General Assembly voted overwhelmingly for a resolution demanding, among other things, “that Israel withdraw from all the occupied Syrian Golan . . .” With only Israel and the United States voting “no,” 151 members of the General Assembly told Israel to withdraw from territory occupied since June 1967 and (in effect) to do so in the midst of civil strife that has all-but-wrecked Syria, leaving a murderous regime propped up by Iranian-commanded militias to preside (in name) over much of the wreckage. The “yes” voters communicated not only callous disregard for Israel’s security, but cold contempt for the suffering of millions of Syrians at the hands of a rapacious regime.

In March 2011, Syrian President Bashar al-Assad chose to wage war on his own people rather than pursue a peace mediation holding out the possibility of recovering the territory lost to Israel by his father, then Defense Minister Hafiz al-Assad, in June 1967. Until he directed his armed operatives to open fire on protesters peacefully objecting to police brutality, Bashar al-Assad had articulated strong interest in reorienting Syria away from Iran in exchange for peace with Israel, the lifting of American sanctions, and the recovery of all land lost in 1967. In the end, however, he decided that violent repression featuring state terror was more important to him than making Syria whole. There was no way Israel could make peace with a regime daily shedding its own legitimacy and willfully discarding its right to speak for all Syrians on matters of war and peace.

And yet 151 states saw fit, on November 15, 2018, to express “grave concern over the halt in the peace process on the Syrian track.” They called upon Israel “to resume the talks on the Syrian and Lebanese tracks and to respect the commitments and undertakings reached during the previous talks.” Set to the side whatever the 151 may have meant by “commitments and undertakings.” Some 500,000 Syrians dead, half the population displaced, tens of thousands illegally detained under the most horrific of conditions, countless civilians traumatized by barrel bombs, artillery shelling, starvation sieges, chemical assaults, and . . . what? No harm, no foul? Reward the premier war criminal of the 21st century with a gift of real estate and let Israeli citizens reap the consequences of his homicidal campaign spilling over into their homes? Each one of those 151 votes amounted to an obscene gesture, one aimed with fine indifference toward Syrians and Israelis alike.

The guiding statement of the United Nations on this matter remains Security Council Resolution 497, adopted unanimously on December 17, 1981. Israel had decided days earlier formally to extend its law, jurisdiction, and administration to the occupied area. The Security Council, with the support of the Reagan administration, held the Israeli action to be “null and void and without international legal effect.” President George H.W. Bush successfully brought representatives of Israel and Syria to the Madrid Conference in 1991, and the administration of President Bill Clinton made major efforts to try to bring about Syrian-Israeli peace. The Obama administration renewed mediation efforts on the Israel-Syria track, and the writer of this article took the lead in that effort.

The danger now is that Israel may, in effect, exponentially magnify the insult of the 151 to the people of Syria by moving to upgrade its claim to the territory in question. Assad—an individual completely dependent on Iran for his survival—would welcome such a gesture: He would play the outraged, aggrieved nationalist and his Iranian masters would try to ride on his populist coattails to secure their otherwise noisome presence. Israel would gain nothing of substance from the symbolism of an empty, if provocative gesture. Its forces and its settlers will remain on the Golan Heights indefinitely in any event, as there is literally no one with whom to negotiate in Syria. There is nothing to be gained for Israel by joining in the General Assembly’s evident contempt for 20 million Syrians.

Israel would do well to avoid doing anything gratuitous with regard to the Golan Heights. It serves no Israeli interests for Syrians—all of them—to conclude that it makes no difference to neighboring Israel if Syria is a satrap of Iran or an independent state featuring legitimate governance and rule of law. Assad is hoping that Israel, with American support and encouragement, will add two votes to the 151 already prepared to coronate him as Syria’s victim-in-chief.

This writer does not expect to see Syrian-Israeli peace in his lifetime. This is not necessarily a long-term assessment. It is, however, a sad one; one that acknowledges that a central purpose in one’s professional life will not happen in time to be personally witnessed and celebrated. Bashar al-Assad’s betrayal of Syria is simply so profound and so far-reaching as to defer indefinitely for Syrians and Israelis alike the promise of real peace and genuine partnership. Israel has no business blessing that betrayal and helping to solidify in Syria an Iranian presence already hard-wired into Lebanon. It would cost Israel nothing to communicate respect for Syrians by taking no gratuitous action with respect to the Golan.