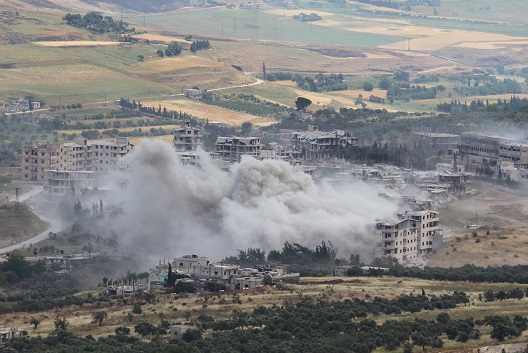 Smoke rises from buildings near the national hospital, after what activists said was shelling by warplanes loyal to Syria's President Bashar al-Assad in the town of Jisr al-Shughour, Idlib province May 22, 2015. (Reuters)

Although the precise nature of Russia’s recent upgrading of its military presence in Syria remains largely opaque to Western eyes, one thing seems clear: Moscow has doubled-down in its support of Bashar al-Assad and the family-based Assad regime. Any illusions about Moscow not being wedded to the regime should now be gone. More importantly, any supposition that Moscow might be an ally in the war against the Islamic State (ISIS or ISIL) has likely been nullified. The Assad regime’s atrocities and illegitimacy installed ISIL in Syria and sustain it there. Russia knows this. It knows exactly what it is doing.

For Russian President Vladimir Putin, there is a potential Syrian scenario arguably worth more than all of the money he has extracted from the labor of his countrymen. It is one in which Assad and the ISIL “caliph” are the only two figures of any political salience left in Syria. For Putin this would be the crowning humiliation of President Barack Obama: having to choose between Bashar the barrel bomber and Baghdadi the ersatz caliph. No doubt, the Kremlin counts on Assad being the chosen one, thereby forcing the US president to eat his August 18, 2011 words about Bashar stepping aside.

Indeed, by averting its gaze from Assad regime atrocities the Obama administration has maneuvered itself into this potentially perilous position. Thus far, it has been spared the worst, but only because Assad and ISIL have generally preferred assaulting Syrian nationalist rebels instead of each other. But what if ISIL lunges westward toward Damascus? Caliph Baghdadi would be as thrilled as Vladimir Putin to see coalition aircraft providing tactical air support to Assad’s army. It would be a recruiting bonanza, both within Syria and globally.

The administration’s disinclination to complicate Assad’s ability to conduct industrial strength massacres is accounted for in large part by its reluctance to alienate Iran while a nuclear agreement was being negotiated. Tehran, however, is as gleeful as Moscow and ISIL about the frightful dilemma looming for the Obama administration. Seeing Washington forced into an alliance with Bashar al-Assad is as good as it gets for Russia, Iran, and ISIL.

Yes, the Obama administration understands fully the role being played by the regime’s external supporters in pumping oxygen into the lungs of the ersatz caliph by encouraging Assad to wage unrestricted war on civilians. Acting together, Iran and Russia could, if they wished, force their client to stop the bombing and lift the sieges. Facts on the ground suggest, however, that they see utility for Assad in mass slaughter and no reason to confront ISIL unless and until all of the regime’s nationalist opponents are first marginalized.

Reports suggest that the administration, in conjunction with its recent agreement with Turkey, may seek to replicate the effects of a no-fly zone in northern Syria by means of a large aerial exclusion zone designed to protect an area from which ISIL would be totally excluded. The idea would be to designate a large chunk of airspace in which only anti-ISIL coalition aircraft would be permitted to fly.

The utility of such a gesture for the protection of Syrian civilians from barrel bombs will depend on its size and its enforcement. Presumably, a sixty-by-thirty mile “ISIL-free zone” on the ground would require a much larger aerial exclusion zone. Aleppo, lying just outside of the ISIL-free rectangle, would surely fall within the aerial exclusion zone. Would Idlib? If regime aircraft challenge the exclusion zone—which they might, given the enhanced Russian presence and Assad’s assessment of US seriousness—would coalition aircraft react decisively? If they do not, it would administer another blow to US credibility.

If Tehran and Moscow were to set aside their dream of forcing Washington to embrace the terminally toxic Bashar al-Assad, something positive might be contrived by all three parties. Iran and Russia do indeed have it in their power to compel the Assad regime to lift starvation sieges, stop the barrel bombing, and release tens of thousands of political prisoners. The United States and its partners have it in their power to compel nationalist military units to cease firing, provided regime and Hezbollah units do the same. Coalition aircraft would continue their anti-ISIL operations and enjoy operational exclusivity in Idlib and Aleppo Provinces, where they would guarantee an end to the bombardment of civilian areas and, if necessary, engage from the air any Nusra Front effort to subvert ceasefire arrangements. In the event of an ISIL assault on regime units, Russia and Iran would be free to assist Syrian military units.

Sadly, there is no evidence of any interest on the part of Tehran or Moscow in forcing their client to drop collective punishment and mass homicide from his political program. On the contrary. They see the gruesome tactics as serving a strategic purpose: preventing any semblance of nationalist, alternative governance arising as an alternative to the regime. By and large, these tactics are not applied to ISIL areas, except when the regime has tried to implicate the coalition in mass casualty episodes. ISIL governance is, for the moment, convenient for the regime and its external supporters. It serves as a foil for a regime desperate to demonstrate anti-terrorist credentials, even as it terrorizes millions of Syrians.

It is understandable that the Obama administration seeks the cooperation of Moscow and Tehran in the quest for a political solution to Syria’s travails. Yet talk of a political process is empty and useless as long as atrocities are ubiquitous. Civilian protection is the coin of the realm. Without it neither intra-Syrian dialogue nor the defeat of ISIL can be purchased. Moscow and Tehran fully understand the nature of the required transaction. If they act now to keep their client from doing his worst, something useful—both political and humanitarian—might result from Moscow’s recent moves. Yet no US president should hold his breath waiting for Putin and the Supreme Leader to counsel moderation on the part of their Syrian client. They know he enables ISIL. Their actions indicate they are fine with that.