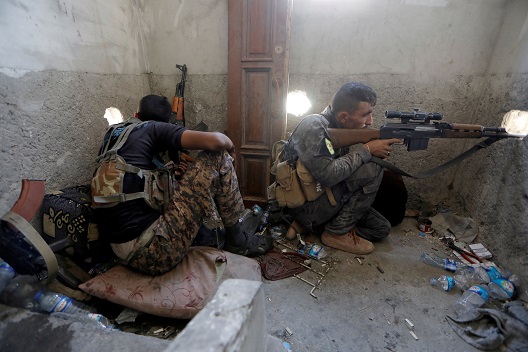 The Pentagon announced on August 21 that it agreed to a buffer zone (or deconfliction line) that roughly adhered to the Euphrates River. This new buffer zone agreement re-establishes a previous agreement and was reached after the United States shot down a Syrian regime SU-22 in June, creating fears of escalation that could draw international players into direct conflict. While the immediate purpose of the buffer zone is to prevent fighting between the Syrian President Bashar al-Assad’s regime and the Syrian Democratic Forces (SDF)—and their myriad respective associated backers—to focus the fighting on defeating the Islamic State (ISIS, ISIL, or Daesh), it also reconfigures the battlefield and creates new pitfalls and opportunities.

The Euphrates River, highlighted above, roughly marks the buffer zone.

The buffer zone has effects beyond allowing the SDF and United States to focus on fighting ISIS. The US military imposed a similar buffer zone on May 1 to prevent fighting between the Turkish Euphrates Shield operation and SDF forces, particularly the Kurdish elements trying to unite their territories in northern Syria. Like the buffer zone along the Euphrates, the May buffer zone was meant to prevent fighting so the SDF could focus on fighting ISIS. It effectively blocked Turkish forces from advancing further south into Syria and prompted Turkey to announce the end of Euphrates Shield soon after. The buffer zone became a de facto border around Turkish-occupied territory. Turkey now controls a small area of land in northern Syria and is focused on stabilization and reconstruction activities.

In May, the United States established a buffer zone between Turkey’s Euphrates Shield area and the SDF controlled territory, to prevent clashes between Turkish and Kurdish forces.

The buffer zone along the Euphrates will have a similar immediate effect, acting as a de facto border between regime and SDF controlled territory. The question is whether the two sides’ major backers (Russia and Iran for the regime, and the United States for the SDF) will adhere to and enforce the buffer zone. In the past, when the regime has found no interest in adhering to a ceasefire, it simply violated it and attacked the opposition. Neither Russia nor the United States used their military might or influence to enforce the ceasefires and the Assad regime, as the major violator, generally justified its actions by claiming to attack extremist groups excluded from the ceasefire. While often a partner on paper to ceasefires, Russia has typically found itself either unable to or unwilling to force Assad to adhere to their conditions; Russia itself often violated the various ceasefires. Without Russian support, the regime is unlikely to be able to fight the SDF, since the regime would not have been able to seize territory from rebels or ISIS without foreign support and in fact was in retreat from rebels before the Russian intervention in September 2015.

As the SDF continues to move east toward the Syria-Iraq border, questions of territorial control become more pressing. A number of cities and villages along the Euphrates, some in fact bisected by the waterway, and one of the major highways going into Iraq run parallel to the river. If the buffer zone extends all along the Euphrates river, this partition raises the question of how these cities will be divided between SDF and regime, not to mention who will seize control of the road. Assad and his backers, particularly Iran, want a land route from Iraq to Syria and out to Lebanon to ensure their strategic hold on the region. The regime currently controls the military airport in Deir Ezzor on the southwest side of the Euphrates, placing the highway on the regime side of the buffer zone if it were extended along the Euphrates. After the defeat of ISIS in Mosul, however, the United States can choose to exert control over the highway from the Iraq side of the border. While Iran would undoubtedly want to pressure Iraq to reject US monitoring of the road, Baghdad has been reluctant to defy Washington in the hopes of continued support. The Syrian opposition controls another highway further south, near the juncture of the Syria-Iraq-Jordanian border, but the road remains vulnerable to attack by Assad’s forces. If the United States and the SDF deny the Euphrates highway to the regime, the southern highway will undoubtedly fall under greater pressure.

The buffer zone also raises question over the control of resources. While the territory northeast of the Euphrates (the SDF side) is rich in natural resources, the Kurdish elements that dominate northern Syria and the SDF—the Democratic Union Party (PYD) and its military arm, the People’s Protection Units (YPG)—seem willing to work with the Assad regime in return for some measure of autonomy. Even if the PYD and regime can come to an agreement, however, some areas will remain contentious. The SDF now controls the three largest dams in Syria (the Euphrates, Baath, and Tishrin dams), which fall on the SDF side of the deconfliction line. With these dams, the SDF controls the output of hydroelectric power from the dams and the flow of water to 80 percent of Syria’s irrigated agricultural land. Assad will not likely tolerate complete dependence on Kurdish good will to run the agricultural sector. Even if he were partial to the idea, such an arrangement could not last indefinitely.

Russia and the United States may also have interests divergent in eastern Syrian than those in western Syria where the various ceasefires were reached. The United States maintains a large ground presence in eastern Syria—set up ostensibly to support the SDF in its fight against ISIS. Russia, however, would like to support its allies consolidate control and project power as Assad’s forces approaches the area. Any intrusion from Assad and his international backers onto the northeast side of the river would threaten to escalate the conflict at the international level. After Russia bombed a US proxy force in southern Syria in 2016, the United States and Russia have tried to avoid direct conflict. In recent months, the Pentagon has demonstrated an increased US willingness to defend against regime forces and its allied militias.

The real problems will begin to surface after the tenuous alliances finally defeat ISIS militarily. At that point, the United States will have to find a way to justify not only its presence in Syria, but also the existence of the buffer zone—particularly if the Kurdish PYD and Assad regime can come to some separate deconfliction agreement. The United States has justified its presence in Syria as an extension of its mission in Iraq to defeat ISIS, but defeating ISIS will raise questions regarding the legality of any continued presence in Syria. Whereas the Iraqi government has asked for US support, the Syrian government of Bashar al-Assad has not. If the United States acknowledges the Syrian government as a legitimate governing body and sovereign state, it would face increased pressure to adhere to Assad’s inevitable demand for US forces to leave.

The buffer zone has created a new consolidated zone of influence for the United States and the SDF, but its future remains in question. Strategic territory, roadways, and resources will undoubtedly tempt the Assad regime to test the extent to which it can regain control, but the US posture will serve as a balance against the Syria-Russia-Iran triad for as long as the United States can justify its stay. If Washington can convince Assad that he will need US military might and resources to maintain stability in at least the northeastern part of the country, it can provide the US with an opportunity to help and direct the path of post-conflict reconstruction and influence the political trajectory after the war. But with Russia’s desire to project power in the region, Iran’s hostile stance toward the West, and Assad’s desire to regain control over the country, it will require an extraordinary political effort—one the Trump administration has not indicated it is willing to make.

Hossam Abouzahr is the editor-in-chief at the Atlantic Council’s Rafik Hariri Center.

Tarek Radwan is an independent Middle East analyst and Advocacy Director for the Arab Center for the Promotion of Human Rights.

Image: Photo: A sniper of the Syrian Democratic Forces aims his weapon during the fighting with Islamic State's fighters in the old city of Raqqa, Syria, August 19, 2017. REUTERS/Zohra Bensemra