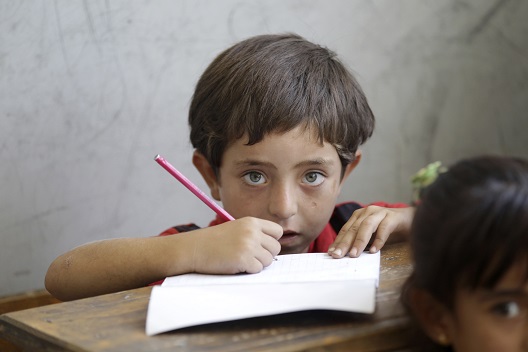 As the Syrian conflict intensifies unabated, four distinct entities have emerged as key players: the Assad Regime; the anti-Assad opposition seeking to depose his dictatorship; the Islamic State (ISIS or ISIL); and armed Kurdish groups. Each of these four parties has sought to instill its own ideas and vision for the future within populations under its respective control, all while recruiting youths to fight in its ranks—a goal largely achieved by introducing reforms to the education system.

The Ba’ath party has shaped the education system throughout its rule by inserting President Assad’s quotes into the texts and its version of the party’s history. When former President Hafez al-Assad rose to the presidency in 1970, he instituted a massive policy of child and youth recruitment for the Ba’ath party.  As members of the Ba’ath Vanguards group, students’ affiliation with the ruling party began as early as age seven, culminating with membership in Ba’ath Youth parties until age seventeen. Indoctrinated from a very young age, the children learned that choosing one’s own political affiliation was a crime. Instead, schools forced children to chant ‘patriotic’ songs venerating Hafez al-Assad and his ruling party while requiring students to wear uniforms emblemized with pro-Assad slogans.

This school year, the government introduced the Russian language as a second foreign language instead of French (students are required to take English as their first foreign language). This new policy shows gratitude to Russia for its political, logistical, and military support of the Assad regime.

Recently, Assad’s supporters have begun to complain about the regime’s lack of attention to the quality of its schools, citing rampant overcrowding, dwindling supplies of textbooks, deteriorating infrastructure, and inadequate security. The regime has also arrested teachers it deems disloyal. The Syrian Network for Human Rights said the regime detained more than 1300 for political reasons in 2013.

In opposition-controlled regions in northern Syria, the Syrian Interim Government’s Ministry of Education (MOE) has not formed an entirely new education system. Rather, working with education-focused organizations, the Ministry has worked on revising the original, government textbooks. It has removed speeches and pictures of the Syrian president and canceled a ‘nationalism’ class because it solely existed to praise Assad. It also removed or revised certain history lessons the opposition considers untrue, such as Hafez al-Assad’s role in building Syria after the country gained independence.

With the support of Qatar, the opposition’s MOE has printed millions of revised, pro-opposition textbooks and distributed them in areas outside of regime control in Aleppo, Idlib, rural Lattakia, and rural Hama governorates.

According to the Ziyad Shritah, a member of the educational committee that has been revising the educational curriculum, classes such as physics and mathematics do not require revision. However, the committee has struggled to amend historical materials due to their political angle. For instance, the Assad regime had described the Ottoman Empire as an occupying power that committed crimes, but had not done so with the Safavid Empire, which is considered the beginning of modern Persian history.

The opposition’s efforts to revise the curriculums will require years to take hold. Moreover, the process must be conducted in a fair and balanced manner free of politically motivated doctrine. Though many schools in opposition-controlled areas have instituted revised curriculums, most remain beholden to Ba’athist-inspired pedagogy.

Even in schools where the new education model has changed, students remain subject to indoctrination—daily chants held each morning before class that once exonerated Hafez and Bashar al-Assad and reiterated the Ba’ath party’s “Unity…Freedom…Socialism” have been replaced by new ones bearing political and religious messages. Activist Marwa al-Bushi found several such mottos at an opposition-run school in Aleppo, such as, “Our goal is Freedom! Freedom! Freedom!” and, “Oh Nation, stay strong: We are all rebels!” Al-Bushi said she does not take issue with the anti-regime nature of the slogans themselves, but rather with the regime’s militaristic and controlling attitude that survives through the education system.

The education situation is most dire in ISIS-controlled territories. Schools there follow an Islamic, Sharia-based curriculum that has eliminated and banned subjects that the group claims “inspire depravity” including art, music, social studies, history, and philosophy. In its place, ISIS has instituted a mandatory study of Islamic law and jurisprudence; changed methods of Arabic-language instruction to rely on religious and medieval texts; removed all photographs and drawings from the classroom; and revised textbooks in such a way that course materials and learning models rely upon Islamic sources such as the Quran, Hadith and Ibn Malik’s thirteenth century grammar book, Alfiya. ISIS has also made Friday the only weekend day, rather than Friday and Saturday.

To implement its education reform, ISIS has forced all teachers and administrative staff to attend Sharia courses, enacted strict control and censorship over all school-related activities, and threatened all who violate its educational policy with physical punishment. Instructors who leave their jobs at ISIS-run schools in protest of its heretical ideology face stiff fines equivalent to three months of salary.

According to the Syrian Observatory for Human Rights, ISIS has added English classes to its curriculum because it realizes how important it is to communicate with the international community. ISIS uses English in its Dabiq magazine and its videos.

ISIS also indoctrinates youth with jihadist ideology and teaches them the importance of fighting for ISIS. This helps ISIS recruit youths as child soldiers and prepare them as the next generation of fighters.

Along the country’s northern frontier, Kurdish groups have instituted Kurdish-language education in their schools. The Assad regime prohibited teaching the Kurdish language and teaching classes in Kurdish.

The schools in northern Syrian have employed Kurdish instructors and instituted Kurdish language as a primary subject. In areas under Democratic Union Party (PYD) control, the Kurdish autonomous government’s Board of Education printed 40,000 textbooks in Kurdish and trained 2,600 teachers for six months on new Kurdish-based curriculum for grades first through third.

According to the Board, Arabs and Assyrians may continue to study in their mother tongue in addition to Kurdish. However, there have been clear challenges, such as how Kurdish children living near in predominantly Arab neighborhoods will be able to attend Kurdish schools, and vice versa, to which the Board has not offered a solution.

The Board has begun distributing the Kurdish textbooks using Latin letters rather than in the Arabic script traditionally used by Syria’s Kurdish-speaking populations. The PYD has also allowed Yazidi and Christianity to be studied along with Islam, the first time officials have permitted the study of minority religions in Syria’s recent history.

The disjointed nature of Syria’s education system reflects the deep cultural and ideological divides plaguing the country since 2011. Each party has sought to solidify its standing in Syria by changing the education system and instilling its own beliefs in Syrian youth. In the end, though, the children are the ones caught in the political and social conflicts, and are the ones who suffer when political conflicts take precedence over quality education.

Image: (Photo: A boy looks on as he attends a class in a school in southern countryside of Idlib, Syria, September 20, 2015. REUTERS/Khalil Ashawi)