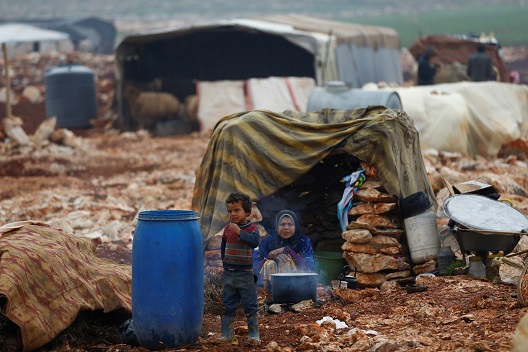 The city of Afrin is at the forefront of events in Syria. Armed opposition forces and the Turkish army have launched Operation Olive Branch in an attempt to remove the Kurdish People’s Protection Units (YPG) from the Turkish border and impede the establishment of an independent Kurdish enclave in the north of the country.

As the military operation continues and Turkish forces take control of some villages in the area, their attempt to move into the city raises concerns about the fate of more than 1 million civilians living in the Afrin area, most of them displaced from other conflict areas.

According to official statistics, Afrin’s population before the Syrian revolution numbered about 500,000 people; made up mostly of Kurds. This number doubled after 2011, reaching nearly one million people.

Kurdish officials from the Kurdish autonomous administration say that half a million displaced people from Aleppo and its villages settled in the Afrin region as a relatively safe area during the revolution.

In a report published as the military operation began, the United Nations expressed its concern over the fate of Afrin residents—particularly as five thousand civilians began their exodus. The difficulty that the most vulnerable groups face in evacuating should also be noted; due to the several years of ongoing siege imposed on the area. The UN expressed its readiness to provide assistance to some fifty thousand people in Afrin and to direct additional assistance to thirty thousand internally displaced people (IDP) from Aleppo.

Controlled by US-backed Kurdish forces, Afrin is surrounded by Syrian armed opposition forces from the east and southwest, while Turkey overlooks it from the north and west. Syrian regime forces control the southern side, further impeding the flight of civilians and particularly those wanted by the Syrian regime.

Only One Way Out

As military operations continue and Syrian armed opposition forces attempt to advance from the three sides, activist and journalist, Mustafa al-Shamali, noted that options for evacuees are limited to regime-controlled Aleppo. Only a few have chosen that route.

Shamali also said that the YPG has blocked the Azaz-Afrin road, preventing civilians from leaving for Idlib, just as Assad-aligned militias in the city of Nubl, in Aleppo province, have tightened their military checkpoints to arrest wanted IDPs fleeing Afrin.

Shamali said that the fate of Afrin residents “will depend on whether opposition forces will be satisfied with surrounding the city to pressure Kurdish forces to leave, or if they choose to confront these forces inside the neighborhoods of the city.”

He added that most of Afrin’s residents have been displaced for many years and some have resettled and created a new life there, increasing the human cost of any new displacement. The complex military situation and the multiplicity of competing and conflicting areas of influence add to the difficulties displaced persons face in deciding their fate.

Mahmoud Othman, from the humanitarian organization, Syria Relief & Development, expressed concern over the fate of thousands of Afrin residents due to the lack of access to humanitarian corridors that would allow evacuation to opposition-controlled areas.

Othman explained that a large part of the population left Aleppo after the Syrian regime conducted its bombing operations in 2016. Wanted by Assad’s security forces and intelligence services, there is little chance they will be able to return to Aleppo. Relief organizations can hardly support current city residents and deliver assistance due to the lack of humanitarian corridors, he added.

The impending clashes in Afrin and the expected displacement crisis coincide with the flight of tens of thousands of other residents from Eastern Hama and Idlib provinces following the advance of the Syrian regime and the inability of international organizations to provide adequate assistance.

According to local Syrian organizations, the number of displaced people in the northern countryside of Idlib exceeded 330,000 in one week. Many of them live in cars and trucks while others stay in worn-out tents on roadsides.

Activists from humanitarian organizations in the region fear the intensification of the Afrin battles and the arrival of new batches of displaced people. They stressed that their organizations’ capacity cannot meet the needs of today, let alone additional large waves of displacement.

According to one relief source in Idlib, the situation is catastrophic. The lack of safe areas in the north of Syria, necessary preparation to accommodate large numbers of IDPs, the failure of international organizations to provide additional assistance, and the continued closure of border crossings only make matters worse.

The deteriorating humanitarian situation coincides with Turkey’s closure of its border crossings with Syria (at Bab al-Hawa and Ongo Pinar) and its indefinite refusal to allow the entry of goods and relief materials due to ongoing military operations.

Mahmoud al-Awad, an Aleppo resident who moved to Afrin in 2012, voiced great concern over the potential interruption of relief goods to the city’s markets. These fears have prompted hoarding and dramatic inflation.

Awad described the situation inside Afrin as quiet, except for the warplanes and military vehicles that frequently roam the city. He noted that residents’ and IDP concerns stem from their exposure to bombardment, particularly worrisome in light of Afrin’s high population density.

A million civilians at risk

Saad Aspro, a former military officer who defected to the opposition, warned of a possible humanitarian disaster in Afrin. As fighting continues nears the city, he noted that this military operation could create “a radical increase in the suffering of Syrians.”

“This crisis will have a similar effect to the crisis in Aleppo if the warring parties do not reach a solution to protect civilians from the potential catastrophe. There are about one million people at risk in this region,” he said.

Aspro hopes the United States will use its alliance with the YPG to intervene as a mediator to resolve this dispute. He added that the northern regions of Syria will turn into chaos if the clashes continue in Idlib and Aleppo, being the last remaining safe areas for about 3 million people.

Last year, the UN considered Syria “the largest displacement crisis in the world.” According to a report published by the Center for Monitoring Internal Displacement of the Norwegian Refugee Council—an independent humanitarian organization—the conflict in Syria has caused the worst crisis since World War II, where continued fighting and violence has forced 10.9 million people (more than half of Syria’s population before 2011) to flee their homes. Nearly fifty families have been displaced every hour since the beginning of 2011; of which 6.6 million are internally displaced.

Despite all these warnings, Syria’s humanitarian disasters and the difficult conditions experienced by millions of people in this country do not seem to affect decision-makers and prominent world leaders who can put an end to this suffering. Given the geopolitics involved, many Syrians believe that their country has become an international conflict—not a civil war, as some claim.