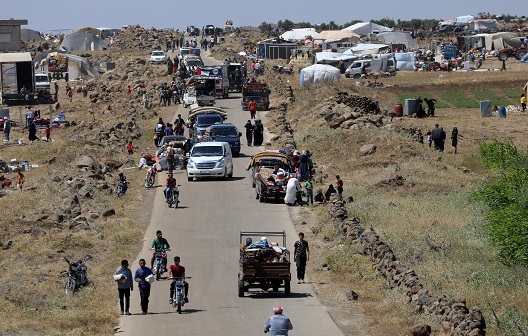 As the battles narrow in scope, the ongoing offensive and strategy of the Assad regime is to recapture the southwestern region which includes Daraa, Quneitra and parts of Sweida. Daraa is controlled by armed opposition groups with the military support of the United States and Jordan. The region is also one of four allotted de-escalation zones signed in May 2017 by Russia, Turkey, and Iran that would halt fighting and reduce bloodshed. The United States, Jordan, and Russia separately negotiated a ceasefire in parts of Syria in July 2017. With the Syrian regime’s recent military offensive in southwestern Syria, these de-escalation plans are now compromised.

The increased violence in the southwest also led to a humanitarian crisis with over 300,000 civilians fleeing their homes only to be met with closed Jordanian and Israeli borders. Below is a timeline of events leading up to the current military offensive.

June 19:  The regime, with Russian air support, bombed Kafr Shams and Busra al-Harir along with a string of other towns in Daraa and the Golan Heights, for the first time in more than a year. Opposition sources claim the Syrian army stepped up shelling in Daraa to mobilize its campaign to retake the region. Syrian state media claims militants increased attacks on civilians in the area and it was targeting terrorist hideouts.

June 22: The regime continued its military push despite international warnings. The United Nations (UN) stated the battle displaced at least 2,500 civilians from Daraa over three days of fighting, while the European Union expressed concern over the “devastating humanitarian consequences” in the region.

June 23: The United States notified Syrian rebel groups they should not expect military support in the Syrian regime’s offensive contradicting earlier statements of “serious repercussions” by UN Ambassador Nikki Haley.Washington sent a message to heads of opposition fighter group Free Syrian Army (FSA), making it clear that they “should not base [their] decisions on the assumption or expectation of a military intervention by us.”

June 26: Regime forces and its allies launched a ground offensive into Daraa helped by Russian air power. The Syrian air force mobilized sixty fighter jets and utilized six military airports to help with the offensive. UN humanitarian aid is disrupted to Daraa and Quneitra, says Jan Egeland Senior Adviser to the UN Special Envoy for Syria, as the battle continues and appealed to Jordan to reopen its borders as “there is no other place to go.”

June 27: Twenty-nine civilians were killed in Busra al-Harir when forces loyal to Assad escalated their offensive against opposition forces. UN officials estimated that at least 45,000 civilians fled their homes to seek safety in Jordan. Civilians sought refuge in the Golan Heights and new refugee camp in the town of Braiqa.

June 28: Shelling resumed for the ninth consecutive day in the rebel-held towns of al-Musayfirah, Hirak and Dael in the suburbs of Daraa province. Three hospitals were attacked in the crossfire and up to 50,000 people were displaced.

June 30: Opposition groups in Daraa began talks with Russia on restoring state-sovereignty in the region. During the negotiation, Russia remained reluctant to yield to opposition groups’ demands. In an official statement,  UN Secretary General António Guterres calls for an immediate ceasefire in the southwest region. Thousands of families who fled the violence are stranded at the Jordanian border. Jordan closed its border to refugees two years ago when a car bomb killed seven Jordanian border guards.

July 1: The Syrian government managed to seize five towns including the UNESCO world heritage site Busra Al-Sham. The major opposition-held town in Daraa accepted the return of Assad rule in what was considered a significant loss in territory for the opposition.

July 2: The UN reported that after two weeks of fighting, over 270,000 civilians are internally displaced. Both the Jordanian and Syrian border remain closed to those fleeing the violence. Jordanian military forces provided humanitarian aid such as water, medicine, and food in the desert of the Jordanian-Syrian border for the first time since the offensive campaign began this summer.

July 3: Several opposition held towns in eastern Daraa agreed to cede control to the Assad regime facing increased air pressure from Russia. The UNHCR warns that the number of displaced civilians is on the rise and pleads for the de-escalation zone to be respected. Air strikes bomb six hospitals and kill two civil defense emergency responders known as the White Helmets.

July 4: Armed opposition groups state that talks with Syria-allied Russia failed because the rebel groups were opposed to surrendering arms. The Israeli Defense Force has strengthened its presence along the Syria-Israel border in the Golan Heights. This may be in response to the government’s offensive moving closer and closer to Israel.

July 5: Talks between Syrian opposition forces and Russian forces about a ceasefire and handing over the remaining territory failed, as the opposition groups refused to give up heavy arms. Russia employed air strikes on Daraa for the first time in four days, making it the most intensive bombing campaign in the two-week offensive.