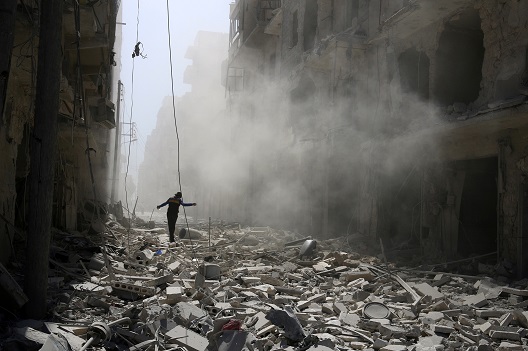 Photo: A man walks on the rubble of damaged buildings after an airstrike on the rebel held al-Qaterji neighbourhood of Aleppo, Syria September 25, 2016. REUTERS/Abdalrhman Ismail

The all-out assault on Aleppo by Russian and Assad regime aircraft, targeting as it does aid convoys, hospitals, homes, market places, and mosques, seems to have mildly surprised and deeply upset senior American officials. Saddled with a president content to look the other way while mass murder unfolds, they had persuaded themselves that Moscow’s demands for joint Russian-American air strikes against terrorists presented a genuine diplomatic opening. This explains the administration officials’ ‘big stick’ in response to ongoing Russian war crimes: they threaten—as if Moscow cares—to walk away from an agreement embodying tactical and strategic collaboration with Russia in Syria. This is the sad, pointless diplomacy of desperation and wishful thinking.

No doubt it has occurred to senior American officials—none of whom are stupid—that Russian demands for collaboration might not be entirely sincere. Whenever the United States objected to the Russian habit of citing a Nusra Front presence as an excuse for bombing civilian hospitals, Moscow would respond by blaming Washington for not sharing intelligence on potential targets. Whenever Washington would object to Russian air attacks on American-equipped Syrian rebel units, this too would be characterized by Moscow as Washington’s fault: without a clearly delineated, American-produced, who’s who on the ground in Syria, Russia would have to consider all Syrians not reporting to their client as terrorists. Yes, it has likely occurred to senior American officials that Russian finger-pointing and excuse-making did not add up to a genuine desire for operational collaboration.

And yet those officials have seen no alternative but to sideline their doubts and plunge headlong into what some suspected was a deadly cul-de-sac. Thus we have seen a vigorous diplomatic campaign aimed at persuading the Russia of Vladimir Putin to bring its actions into conformity with its words: to work with Washington to make a genuine, operational distinction between al‑Qaeda operatives and patriotic, nationalist Syrian rebels. A fool’s errand? Certainly. Moscow, Tehran, and their client want the patriots, the nationalists, and the civilians supporting them gone first: they are the real obstacles to Assad ruling in perpetuity. But for American officials genuinely appalled by a humanitarian abomination and its catastrophic political consequences, what choice did they have? What choice did President Obama give them?

Several years ago this writer encountered on the streets of Washington a White House official for whom he had tremendous respect. He asked the official about the prospects for the Israeli-Palestinian peace campaign about to be launched by Secretary of State John Kerry. The answer was revealing: “How would I know? I work in the White House. This is Kerry’s deal.”

Now it seems we see another “Kerry deal:” a relentless attempt to play diplomatic judo with Russian words by trying to translate Moscow’s demands for jointness into a mutual targeting veto and the grounding of the Assad air force. Kerry gets the big picture: with defenseless civilians on the bullseye there is no prospect for diplomatic progress in Syria; and the Assad regime and Russia make the Islamic State (ISIS, ISIL, Daesh) look hesitant by comparison when it comes to mass homicide in Syria. So Kerry tried—and apparently failed—to shame the Russians into operationalizing their own words. And as bombs falling on Aleppo laid waste to months of tireless diplomacy, the chairman of the joint chiefs of staff administered the coup de grace by sharing with a Senate committee his strong reservations about military collaboration with Russia on any level.

General Dunford’s objections were well-reasoned and persuasive. But where was American policy in all of this? Do all of the key players—White House, State, and Pentagon—have their own ‘deal?’ Who is in charge?

President Barack Obama can draw comfort in his passivity from a bottomless reservoir of public indifference toward the rape of Aleppo now taking place. It is not that Americans endorse mass murder in faraway places. But in light of a catastrophic misadventure in Iraq and endless war in Afghanistan few Americans would disagree with the proposition that this is a terrible problem for someone else to solve.

The American ambassador to the United Nations, Samantha Power, won the Pulitzer Prize for a priceless volume about 20th century mass murder and how American presidents either measured up to the challenge or skulked away. For it is only presidential leadership that can convert mass indifference to pointed resolve. It is the lack of such leadership in this administration that gives birth to diplomatic long shots that benefit neither from useful leverage nor a unified executive branch position. The administration even went out of its way to sink preemptively a piece of sanctions legislation aimed at mitigating civilian slaughter in Syria, one that certainly would have gotten the attention of Mr. Kerry’s Russian counterpart. And one can only imagine what the secretary of state must have been thinking when the testimony of the chairman of the joint chiefs was brought to his attention.

A careful consideration of military options is not pleasant work for any American president. Yet in this case it must be done. Yes, the Russian presence in Syria—about to mark its first anniversary—complicates things. No, no one is calling for invasion, occupation, or violent regime change. Unless, however, the Assad regime free ride for mass murder is brought to a screeching halt—and soon—there may be hell to pay, and not just by Syrians. The Vladimir Putins of the world may not always draw the correct conclusions from their perceptions of weakness, but they inevitably draw conclusions that can create danger—and not just in Syria. President Obama should avoid misleading Mr. Putin. He should also spare his subordinates the misery, humiliation, and frustration of trying to find truth, honor, and decency in the words of Mr. Putin’s employees. He should find civilian slaughter in Syria unacceptable, and demand of his defense secretary options for exacting a price of a murderous, cowardly regime currently convinced it can do with absolute impunity as it pleases to children and their parents, where and when it wants.