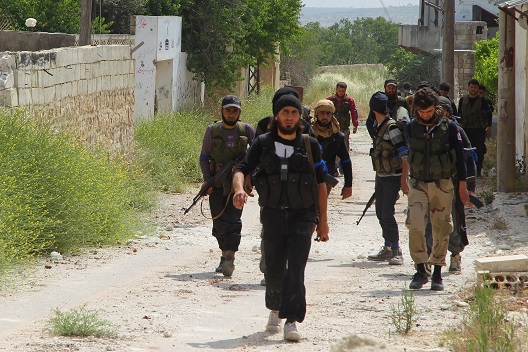 Rebel fighters walk in Mastouma village, after they said they had advanced on the area, in Idlib city, May 19, 2015. Heavy clashes between Syria's army and insurgents erupted around a military base south of Idlib city on Monday as part of a wider battle for control of the northwestern province. (Reuters)

As noted in the May 18 MENASource article on civilian protection, an administration operationally inert in the face of Bashar al-Assad’s atrocities sees peril if Assad collapses too soon, which is to say nearly four years after President Barack Obama counseled him to step aside. The alarming specter of Islamist extremists swarming over Damascus, wading in the Mediterranean, and putting Syrian minorities to the sword animates the administration (as it did in the cases of Yazidis and Kurds) in ways actual, here-and-now regime depredations do not. Still, a sudden regime collapse accompanied by the parallel implosion of security forces could indeed expand greatly the numbers of Syrian civilians at risk. If the Assad regime and armed forces propping it up are indeed in danger of vaporizing, what could be done to understand and mitigate risks associated with the regime’s catastrophic success in implicating Syrian communities—most notably its own Alawite sect—in its violent, barbaric, civilian-centric survival strategy?

First: reject the morally questionable, utterly impractical, and one-stop policy shopping approach of hand wringing over the near-term fate of the Assad regime while calling passively for a magic political process to materialize.

For Washington to consider this regime—meaning the extended family and its blood-soaked clique of enablers—as an island of stability in a storm-tossed sea of sharks, is to mock the dying and the dead and to disrespect those tortured, terrorized, and traumatized. Yes, steps must be taken to prevent the abomination created by Assad from expanding to victimize others. But those who consider the regime a stabilizing force ought themselves to share in the experience of being bombed by chlorine-laden, shrapnel-filled barrels packed with high explosive.

For those in the administration requiring assurance, it is doubtful that Iran will let the regime fall. Tehran’s work of creating parallel, Hezbollah-like governing institutions in Syria is far from done. Until it is, Bashar will remain a valued collaborator and an essential cog in the Iranian logistical machine keeping Hezbollah in Lebanon fit to fight.

Second: distinguish analytically and operationally between the regime, the army, and the government currently serving it.

The Assad regime is a clan and an entourage of operatives together constituting a criminal enterprise determined to survive irrespective of the costs to Syria and the neighborhood. Would the sudden passing of the regime leave areas currently dominated by the Syrian Arab Army defenseless? Would the army and Syrian Arab Republic Government collapse if Assad dies or boards a plane for Belarus? Surely, intelligence communities, having four years to study the issue and establish pertinent contacts, have some analytical views and operational tools. Suffice it to say that not everyone stuck serving the family is enamored of it or of its willingness to make Syria a Persian satrapy. Indeed, the removal of the regime—a criminal family and its supporting entourage—may well be the key to political transition talks unifying the country for the war on the Islamic State (ISIL or ISIS). What is beyond doubt is that the regime is the principal obstacle to a political process and a unified anti-terrorist fight.

Third: establish in the region a robust political-military task force that would help Special Presidential Envoy John Allen close the strategic gap between the war against ISIL and Assad’s war on the Syrian people.

The task force would help Allen sustain discussions with regional allies and friends aimed at producing feasible military options (featuring the use of regional ground combat forces) for the near-term elimination of ISIL in Syria, the creation in liberated Syria of a governing alternative to the Assad regime, and the rapid building of an all-Syrian national stabilization force. This capable Syrian army would be trained not only to fight and kill, but to protect civilians, facilitate humanitarian assistance, and receive into its ranks patriotic Syrians now obliged to serve the regime. This kind of heavy diplomatic lift might just produce a basis for genuine political negotiations, but it surely cannot be micromanaged in Washington by White House staffers. The ability of ISIL to sink in Syria the kinds of roots it has in Iraq will depend on the amount of time it is granted to operate, the recruiting lure of Assad’s ongoing atrocities, and the absence of a clear, civilized alternative to rule by crime family.

Fourth: work closely now with allies and friends—mainly Turkey and Jordan—to develop executable contingency plans responding quickly to a fast-breaking, comprehensive collapse of the regime and the simultaneous disintegration of the Syrian Arab Republic Government and the army.

As improbable as such a scenario might be given the level of Iranian (including Hezbollah) commitment, it is still a contingency worth planning against. If a total security vacuum presents itself, ISIL will—as is its habit—move quickly to fill it. The consequences for Syrian minorities in particular would be catastrophic. As for actual Syrian rebels—including those in the ranks of the Nusra Front—pogroms, atrocities, and the like directed against minorities and others must be deemed (for planning purposes) likely (if not as inevitable or widespread as ISIL savagery) given the Assad regime’s execrable practice of deliberately setting Alawite-dominated military assets, intelligence operatives, and shabiha gangsters against defenseless (mainly Sunni) civilians. In the event of a total governmental and security services (as distinct from Assad regime) meltdown, plans should be in place for regular armed forces drawn from mainly Turkey and Jordan to fill vacuums and protect civilians in Damascus and other cities as well as in northwestern Syria.

Fifth: assert US primacy—taking counsel from a team of Syrian advisors—in arming and equipping rebel units currently operating inside Syria.

Turkey and Gulf Arab partners have complained bitterly about the perceived lack of US leadership in countering the mass homicide campaign of the Assad regime. These partners do not, however, fully share Washington’s total (and appropriate) aversion to sectarian primitives and do not, to say the least, feel Washington’s obligation to vet recipients of weapons and training on an individual basis. The willingness and ability of the United States to take charge of all arming and equipping could have direct implications for post-Assad civilian protection.

With mature, knowledgeable Syrian guidance, the crippling retail vetting process now in place can be relaxed to the point where sizeable units of genuine nationalists can be robustly resupplied so that they can operate effectively and begin to attract decent young Syrian fighters away from sectarian elements generously, if ignorantly, funded by foreigners. If US partners want US leadership, then they should abide by a logistical process that consciously aims to support and attract real Syrians, not apostles of sectarian division and even hatred. But this approach can only succeed with Syrian guidance.

It goes without saying that the United States can play no role in the post-Assad reconstruction of Syria if the Syrian Revolution, in the end, amounts to the replacement of one set of sectarian barbarians by another. It would be awkward for President Obama to speak publicly along these lines and about the gathering threat to Syrian minorities, given that his administration has done so little to protect the majority. Yet for the United States to remain operationally inert in the face of what may prove to be a greatly expanded humanitarian abomination inside Syria would be to compound and confirm an approach to the protection of innocent civilians that been a policy disaster and a moral failure.