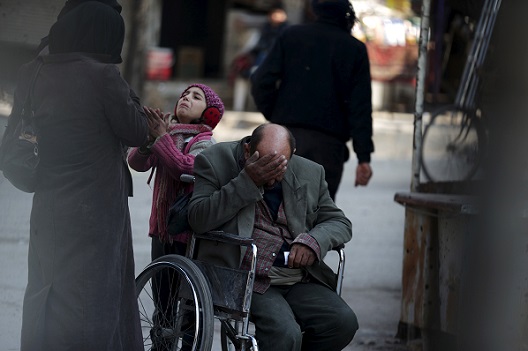 For over four years an article of faith for senior Western politicians has been that there is no military solution to the crisis in Syria. Properly translated this mantric assertion, still being chanted in 2016, would read as follows: We in the West will not lift a finger militarily to stop, complicate, or mitigate mass murder in Syria so long as the perpetrators are Bashar al-Assad and his external enablers: Iran and Russia. Therefore someone ought to resolve this odious crisis diplomatically. The suspension of peace talks in Geneva now forces political elites in the West to confront openly that which many already knew privately: there is a military solution, and Russia is trying unashamedly to achieve it.

UN Special Envoy Staffan de Mistura suspended the Geneva talks until February 25 for one reason: Russia had taken full advantage of a peace conference it had helped organize to escalate its military campaign against nationalist rebels in northwestern Syria—a predominantly air campaign that was adding significantly to the horrific death toll of Syrian civilians.

Just as de Mistura himself emphasized to the Security Council on January 18 that the protection of Syrian civilians in combat operations is neither a precondition nor a confidence-building measure, but rather an indicator of seriousness or the lack thereof in a diplomatic process, so the opposition delegation at Geneva arrived prepared to discuss ceasefire terms in spite of the ongoing carnage. But de Mistura himself saw the uselessness of trying to plunge forward in the face of Russian military escalation.

Reacting to de Mistura’s decision to suspend the talks, Secretary of State John Kerry said, “The continued assault by Syrian regime forces—enabled by Russian airstrikes—against opposition-held areas, as well as regime and allied militias’ continued besiegement of hundreds of thousands of civilians, have clearly signaled the intention to seek a military solution rather than enable a political one.” This is potentially important.

Although Kerry’s statement does not acknowledge that the military solution actually exists, it does imply understanding of a key point. Moscow has used its “co-convener” status of the Vienna peace process (which mandated the Geneva conference) as a cover to distract and occupy Washington and the West while pursuing its political-military objective: neutralizing the armed nationalist opposition in order to create for the West—for Washington in particular—the horror of a binary choice between Bashar the Barrel Bomber and Baghdadi the False Caliph.

Russian President Vladimir Putin has taken the measure of the West and has decided that he can pull this off with impunity. There is no guarantee that he can. But the tut-tutting of Western politicians about the mistake Putin is making and the quagmire that awaits him impresses the Russian dictator not in the least. He has been schooled by an ever-widening gap between Western (especially American) word and deed in Syria. He has noticed that for all of the verbiage about human suffering, mass homicide, terrified refugees, red lines, and people stepping aside, the West has protected not a single Syrian inside Syria from his regrettable client.

For Moscow the attempted military solution being enabled by the Vienna process has nothing to do with facilitating stable, legitimate governance or defeating the Islamic State (ISIL, ISIS, Daesh). The mission is to defeat all nongovernment, non-ISIL armed opponents of the Assad regime. The desired end-state is one in which the uprising against Assad family misrule is effectively neutralized, with Assad and Baghdadi alone left standing in Syria. This is also the end-state desired by ISIL. So much for the American “common enemy” thesis.

None of the foregoing is derived from the state secrets of anyone. From the outset Russia’s military campaign has expended little effort against ISIL. During the preceding two years ISIL and the Assad regime had devised a mainly live-and-let-live relationship, each focusing for the most part on trying to eliminate alternatives to both.

What is remarkable, however, is the determination of the West to whistle past the graveyard on these matters, insisting on the operational relevance of what Moscow signed up to in Geneva in 2012 and at Vienna in 2015. Even in the wake of the February 3 suspension, the very capable Department of State spokesman insisted on the relevance of Russian commitments to ceasefires, humanitarian access, peaceful negotiations, and the like, and proved unable to form his lips around a very simple and truthful statement: Russia has imperiled diplomatic prospects by using the Vienna process as a cover for military operations and objectives; Russia is fully to blame for the suspension of the Geneva talks.

Perhaps the administration fears that such directness will lead people to conclude that it was, once again, gulled by Moscow. But this is not a matter of otherwise perceptive people having wool pulled over their eyes. John Kerry has raced headlong for a diplomatic process for the same reason he did so in 2013: there is nothing else in the administration’s policy quiver. His sole hope for a successful negotiation rests on persuading Russia and Iran to abandon that which they regard as their national interests in Syria. One wishes for Mr. Kerry all of the luck he will need to persuade actors who are fully at ease with mass murder and whatever else it takes to preserve their client and maneuver the West quickly into the Assad-Baghdadi selection process.

President Barack Obama may well leave office before the horrific choice lands in the Oval Office. As was the case in the last century when American presidents attempted to look the other way when governments elected to slaughter their own citizens, the president can fall back on a solid wall of public and congressional disinclination toward involvement in someone else’s problem. Presidential leadership has always been the key variable in saving lives and catalyzing requisite political changes.

Saving innocent lives is not, however, a universal motivator. So put humanitarian considerations aside: what happens in Syria does not stay in Syria. The gap in Syrian policy between US words and deeds surely has not imposed limits on Vladimir Putin’s dangerous and destabilizing behavior in Europe. And if his current offensive in Syria sends yet more waves of refugees in the direction of Turkey, Jordan, Lebanon, and Western Europe, we should not expect Russia’s leader to lose sleep. Barack Obama may not be the only one hoping to leave office before the piper is paid. Russia may be dying, but Putin’s nationalist show of military aggression may buy him a few years in the saddle. Still, it is extraordinarily dangerous. It is a threat to the peace.

Syrian rebels—including some reportedly armed and trained by the United States—are defenseless against Russian air attacks. If diplomacy is to have a chance—if a military solution is to be avoided—leaving them defenseless is the wrong medicine. Mr. Obama is now making moves in Europe that recognize the threat posed by Russia: moves from which his successor will benefit. Perhaps—if for no other reasons than to save lives, give diplomacy a chance, and curb Russian impunity—he will move in Syria as well.

Image: (Photo: Reuters. A girl with her father in a wheelchair, asks for help to pay a medical bill from passers by, in Douma, Syria February 3, 2016. REUTERS/Bassam Khabieh)