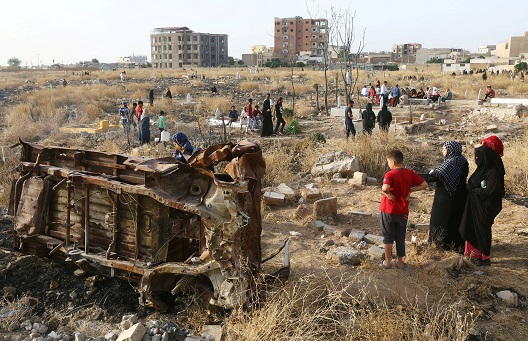 Photo: People visit the graves of their loved ones during the first day of the Muslim holiday of Eid al-Fitr in Raqqa, Syria, June 5, 2019. REUTERS/Aboud Hamam

Deliberate, systematic, and relentless targeting of defenseless civilians is the headline of eight-plus years of conflict in Syria. Mass murder by aircraft, artillery and missiles, ‘starve or surrender’ sieges, illegal detentions, horrific torture: these have been the hallmark tactics of a ruling regime determined to survive politically at any cost; one that has inflicted industrial scale state terror on civilians residing in rebel-controlled areas.

The results inside Syria have been catastrophic. But they have not been limited to Syria. What has happened in Syria—one of history’s most sustained assaults on innocent human life—has not stayed in Syria. The consequences of mass homicide threaten the security of the United States and the entire Western alliance.

For many Americans the word “Syria” is now synonymous with cruel, man-made human suffering. Images of the body of a little boy washed up on a beach after falling from a small boat while fleeing a slaughterhouse with his parents moved millions to tears. The courage of White Helmets civil protection personnel combing through rubble after Assad regime and Russian air raids to rescue children and their parents has likewise inspired deep emotion and strong admiration. Even these brave men and women have suffered grievously, as regime “double-tap” air assaults deliberately target rescuers.

Still, many Americans see this extended episode of governmental mass homicide as something limited to a faraway country; something horribly inhuman, something to be stopped, but essentially someone else’s problem. This is a big mistake. The sheer enormity of state terror in Syria and its spillover effects threaten us all.

Mass slaughter in Syria is not ‘only’ a humanitarian abomination that has killed hundreds of thousands of civilians, maimed many more, and permanently traumatized countless children. It is not ‘simply’ a compendium of crimes against humanity crying out for accountability and justice. It is not ‘merely’ an indictment of a regime whose addiction to torture and Nazi-like record-keeping of it define sadism. The exposure of defenseless Syrian civilians to the merciless brutality of their government has stimulated the rise of global Islamist terrorism, swamped Syria’s neighbors and Western Europe with terrified refugees, and encouraged dangerous, destabilizing Russian adventurism both inside Syria and around the globe.

The evidence is overwhelming that Syria’s president, Bashar al-Assad, has orchestrated a wave of crimes against humanity that has rarely been replicated in human history. He has been protected and his criminal rampage facilitated by Russia and Iran. He is widely (if misleadingly) regarded as the ‘victor’ in Syria’s ‘civil war.’

Indeed, given what Assad has done to millions of his own people, ‘victory’ will be Pyrrhic at best. Syria cannot be stabilized, rebuilt, and rendered resistant to Islamist extremism so long as he, his crime family, and his entourage remain on the scene. And even if Russia and Iran enable him to prevail, using the same uncivilized techniques that have helped secure his survival, the West—for reasons of self-defense—cannot consent to such an outcome.

Why did it happen?

When the Arab Spring of 2010-2011—widespread popular protests of illegitimate, incompetent, and kleptocratic governing systems and autocrats—swept through Egypt, Libya, Tunisia, and Yemen, Syrian President Bashar al-Assad stated publicly that Syria would be spared any tumult. He had an advantage that others lacked: many Syrians believed (or at least hoped) their young president was trying to reform a brutally corrupt system bequeathed to him by his father.

Yet Assad would squander this priceless advantage and shed his governing legitimacy, by inflicting lethal force on peaceful demonstrators in the city of Daraa protesting police brutality against children. He would repeat this lawless pattern elsewhere as sympathy protests popped up all over Syria. Instead of demonstrating respect for the safety and dignity of aggrieved citizens already bearing the burden of massive unemployment—instead of demonstrating leadership and decency—he unleashed violent ‘security’ forces against them.

In power since 1970, the Assad regime had cloaked minority Alawite rule in the garb of secularism. Yet it was the initial wave of peaceful protests in 2011 against police brutality and other regime assaults on human dignity that truly reflected Syrian patriotism and non-sectarianism. Although Assad could have handled the protests with peaceful restraint, he panicked.

Seeing the danger to family rule posed by a nonviolent, secular opposition, Assad militarized the uprising through months of lethal attacks on protestors. He emptied his prisons of violent Islamist extremists, successfully polluting the opposition to him by force-feeding sectarianism. And he eventually pursued a largely live-and-let-live relationship with the organization it became, the Islamic State (ISIL, ISIS, Daesh, IS) arising from the ashes of the regime-supported al-Qaeda in Iraq.

Regional opponents of Assad, seeking clients among Syrians willing to fight the brutal dictator, played into his hands by supporting armed sectarian rebels. Assad has tried—with some success—to justify a scorched earth approach to civilians in rebel-held areas by portraying himself as battling extremism and terror; extremism he has promoted, and terror he has inflicted.

His public diplomacy theme from the beginning has been some variation of ‘If you think I’m bad, look at ISIL and Al Qaeda.” And, by targeting overwhelmingly Sunni Muslim population centers, he has taken hostage many members of Syria’s minorities, most notably Alawites and Christians.

By bombing and shelling civilian residential areas without regard to military targets, the Assad regime defined itself as a terrorist entity: one deliberately and randomly targeting civilian populations to produce a desired political outcome; in this case the separation of armed rebels from a supportive, sympathetic, or at least tolerant population base.

Eight years of state terror have escalated from rifle attacks on the leaders of demonstrations to aircraft, artillery, and even Scud missile attacks on densely populated residential areas. The toll in injury, death, destruction, displacement, trauma, and terror is incalculable. Assad has, in effect, burned the country to ‘save’ it for his family and entourage.