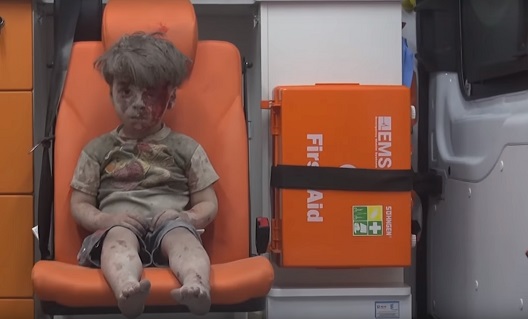 As Aleppo writhes in torment under bombs dropped by Russian aircraft launched from an Iranian airbase, one wonders if it occurs to anyone in the White House that something has gone horribly wrong. One wonders if anyone in the executive mansion cares. As a blackened and bleeding five-year-old boy testifies with his befuddled gaze to a hollowed-out, leaderless, self-absorbed, and negligent West, one wonders what it will take for the Obama administration, in the time remaining to it, to muster a spark of decency in its Syria policy.

For months the American secretary of state has engaged in tireless, but leverage-free diplomacy. He has attached himself at every opportunity to the lapels of his Russian counterpart in a sadly persistent attempt to wring decency from Moscow’s Syria policy. As administration officials plaintively plead with the Russians to bring their military actions into line with their stated intentions, Moscow senses craven weakness. One could forgive Kremlin denizens for laughing derisively at overblown American language lauding the liberation of Manbij from the Islamic State (ISIS, ISIL, or Daesh) as if it were the landing at Normandy. What they see is Washington nowhere to be found as Assad, Russia, and Iran do what they please to Syrian civilians and their hospitals.

Will the haunting face of a dazed young child be enough at long last to move President Obama on Syria and make the commission of mass murder something more complicated and risky to its perpetrators than a stroll in the park? Perhaps not. American boots can gather Syrian dust as long as the soldiers wearing them are in the fight against ISIS. There is no talk of slippery slopes as long as ISIS is the target. But protect civilians from Bashar al-Assad, Syria’s premier mass murderer and ISIS’ all-star recruiter? That, it seems, is a bridge too far. That is something that would offend Iran, possibly putting at risk a hard-won nuclear agreement.

No one in the history of the Syrian conflict has counseled Mr. Obama to invade and occupy Syria, fighting Iranian forces in the process. Fifty-one conscience-stricken State Department officers recently pressed upon him a variation of what others, in and out of government, have urged him for years to do: use limited military means to exact a price for mass homicide in an effort to deter it. For years the president has said no. The consequences for Syrians, their neighbors, and European allies have been staggering, as a country that began the war with 23 million people gradually empties itself. And ISIS—the author of heinous atrocities abroad—is in large measure a consequence of Assad regime mass homicide unchecked by the civilized world.

Yet whenever presented with modest proposals for measured pushback, Mr. Obama and his communications mavens deploy an army of straw men to counterattack. They have exploited the understandable, if misguided reluctance of Americans to do anything at all of a military nature in the Middle East after the experience of Iraq.

ISIS—partly the result of Assad-induced state failure in Syria—is the exception. But Assad himself—a protégé and employee of Iran—has been spared entirely, even though a straight line runs from his practice of mass homicide in Syria to the ‘Brexit’ vote in the United Kingdom and the rise of Vladimir Putin lookalikes in the politics of the West. Iran is the key to understanding why the Obama administration immolated its own reputation in the 2013 ‘red line’ fiasco, and why it continues to look the other way while Assad and his enablers enjoy an unrestrained crime spree.

President Obama hopes that the painfully negotiated nuclear agreement with Iran will eventually bring that country in from the cold. In the meantime he will do nothing that might offend Tehran. Mass murder in Syria? Yes, it is bad. But the outreach to Iran is, in the president’s view, historic, and the administration thinks nothing should be done to place at risk that which has been achieved and the presidential legacy it represents. Indeed, the president has even told longtime American partners who oppose Iranian regional hegemony to get over it and “share the neighborhood.”

It is as if Tehran signed the nuclear agreement as an act of charity. It is as if Iranian interests had nothing to do with it. It is as if Iran, which had no problem negotiating with the United States while facilitating mass murder in Syria, would be confounded and permanently alienated by a parallel demonstration of American ability to do two things at once.

For a White House obsessed with media-dominating communications, the launching of Russian aircraft from an Iranian base is a very inconvenient story line. And one can almost hear the West Wing carping: ‘This five-year-old kid is killing us.’ Still, is it too much to ask of this president, even with only five months left to serve, to do the right thing?

Yes, the nuclear agreement with Iran is important. Yes, complicating mass murder in Syria would infuriate the supreme leader, his president, and his smooth-talking foreign minister. But continued inaction in the face of an abomination shaped by Assad, Iran, and Russia is exacting too high a price in Syrian lives, Western security, and American reputation. This is not an outcome a presidential legacy will survive. This was not the outcome envisioned by a thoughtful president. Yet this is where we are ending up. Ideally a five-year-old boy will bring adults to their senses and help leaders, at long last, lead.

Image: Photo: Still taken from a video from the Aleppo Media Center: https://www.youtube.com/watch?v=7cfBmRW3isc. It took civil defense members an hour to dig Omran Daqneesh out of the rubble after his home was destroyed in an air strike.