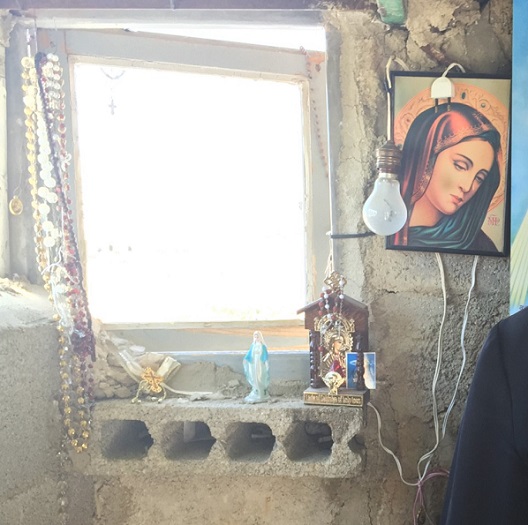 Syrian Christians face the difficult question of how to preserve their communities. The Islamic State (ISIS) and other Islamist groups target Christians for a variety of reasons, including to gain credibility as the implementers of “true” Islam and for economic reasons, forcing Christians to pay higher taxes (Jizya), seizing their property, and even capturing Christians as slaves. Christians in regime territories are safe from immediate danger, but struggle to keep their communities together.

Despite Assad’s efforts to portray himself domestically and internationally as a protector of Christians, the prelate who hosted me this past August in Damascus was openly critical of him. The prelate, who asked not to be named, said of Bashar al-Assad, “He is a dictator trying to save his head, only interested in himself and his family, not even his [Alawite] sect.”

However, the fact that the prelate has no love for Bashar al-Assad does not mean that he is going to turn on him. The prelate’s priority is his community and he feels that no one else is protecting Syrian Christians. “Western governments are not helping, with the exception of Germany, whose government has provided food parcels, medical kits, and education programs to our Church organizations and maybe to others as well.” He continued, “They are willing to help Iraqi Christians because they are persecuted by ISIS, but here in Syria we are considered to be pro-regime.”

Syria’s Christians are like the rest of its population, the prelate explains, divided between proponents and opponents to the regime and those who remain neutral, “but in the end, Christians find the president [Assad] a protector, somehow. Until now, the opposition did not present any good things to the rest of population. We are seeing only Islamic opposition and takfiris against everybody,” he said, referring to the practice of extremist groups of declaring those who do not align with their beliefs as apostates. “We don’t know when we will have real democracy but until then he [Bashar al-Assad] is the best.”

Nonetheless, Syria’s Christians are aware that the regime cannot guarantee their safety forever. “We need protection, but can’t be protected by the government,” the prelate confides. Considering potential scenarios for Syria’s future, I asked about the scenario of Syria being divided, with the Alawites creating a state in western Syria. The prelate did not believe the Alawites would protect Christians. “Shias and Alawites are less radical [than Sunnis] but until when? Now they are not a majority in Syria but what will happen when they will be in power and controlling everything in their own country? Christians who live in areas near Tartous and Latakia are already treated in a very bad way. When they will have their own country it will become worse,” said the prelate.

Although many Christians do not trust the regime, the opposition too does not offer much promise. The opposition’s extremist elements have killed, kidnapped, and expelled Christians, burned churches, and destroyed early Christian monasteries. The prelate also complains that the opposition has denied Christians the ability to remain neutral in this conflict.

While Christians fear ISIS and the al-Qaeda affiliated Nusra Front more than other opposition groups, many Christians do not distinguish between moderate and radical rebels. A clergyman who led a parish in Homs before the war said Free Syrian Army (FSA) fighters and other Islamic armed groups expelled 15,000 Christian families from their homes in the old city of Homs in February 2012.

The fighting has sown distrust between Christians and Muslims. The clergyman from Homs said Muslim neighbors participated in the eviction of Christian families from the city. Contacts shared similar stories about Muslim neighbors betraying Christians in Sednaya, a village located 15 miles north of Damascus. Robert Fisk, writing for The Independent, reported that Christians from Maaloula, a village near Sednaya, said Sunni Muslim neighbors led Nusra Front fighters into the town. The extremist group killed at least ten Christians, some of them for refusing to convert to Islam. The same article quotes Hanna, a Christian from Maaloula, saying, “Some of the Muslims who lived with us are good people but I will never trust 90 percent of them again.” Such events make Christians feel threatened, especially in more isolated communities. In Sednaya and other villages, men have left their jobs to staff checkpoints to protect their communities.

The clergyman says Saudi and Qatari TV channels, like El Wesal, with persistent and dehumanizing attacks on non-Sunni minorities helped incite violence against people who had long been neighbors. This polemical and violent discourse has put Christians on the defensive, and some are now cautious about openly showing their faith. Wearing traditional clerical garb helped my guide in Damascus pass through regime checkpoints, but a monk told me he refrains from wearing his robe in the capital because he fears being attacked. Despite claims that the Saudi government shutdown El Wesal last year, the TV channel is still operating.

The prelate expressed concern about the Christians’ ability to persevere in Syria. “To [imagine] the Christian’s future in their homeland is now a little bit difficult, if you can see the surrounding countries, you can learn something about the future of Christians in Syria.” Looking at neighboring Iraq, the Christian population has decreased from 1.5 million before the war in 2003 to 500,000, and according to some counts as low as 200,000.

Syrian Christians trace their presence back to Christianity’s founding, and they preserve ancient customs including the Syriac and Aramaic languages, which some Christian villages still consider their mother tongues. If Syrian Christians fall to the same fate as those in Iraq, the loss for Syria goes beyond the immediate loss of life to the identity of the country. Syria will no longer be seen as a culturally diverse society, home to ancient religions and rich cultures. The question facing Syria’s Christians of how to preserve their community concerns all Syrians, not just Christians.

Flavius Mihaies is a consultant at the World Bank and an independent journalist. He is a contributor to Huffington Post France and United States editions. In May and August 2015 he traveled to Syria, where he visited Damascus, Homs, and the Kurdish-controlled region in northwest Syria. Follow him on Twitter @flaviusoxford.

Image: (Photo: A picture from the author's recent trip into Syria. Courtesy of Author.)