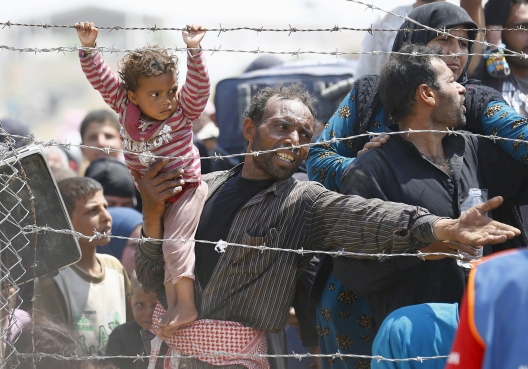 Photo: A Syrian refugee holds onto his daughter as he waits to cross into Turkey at Akcakale border gate in Sanliurfa province, Turkey, June 15, 2015. (Umit Bektas/Reuters)

The Washington Post, on July 10th,contained an impressive commentary authored by Atlantic Council Director Nicholas Burns and International Rescue Committee CEO David Miliband.  In Syria’s Worsening Refugee Crisis Demands Action from the West, the authors argue—among other things—that, “The debate about a no-fly zone across Syria to protect civilians from the Assad government’s deadly ‘barrel bombs’ needs to move from slogans to details.”  What is crucial, however, is the venue of this detailed debate.

Unless it takes place within the national security structure of the United States government under the aegis of an engaged president finally seized with the inadmissibility of unopposed mass murder in Syria, it will be as useless as the sloganeering the authors rightly decry.  And whether or not President Barack Obama becomes seized with the issue depends in large measure on the message he gets from humanitarian and human rights organizations whose work he respects.

The question comes down to this: can organizations, whose default position is one of resisting or rejecting military intervention, come to the conclusion that stopping or mitigating mass murder in Syria may require military countermeasures?

Presumably if slaughter in Syria could be defined as a specific subset of mass homicide—genocide—organizational leaders, their boards, and their contributors could see their way clear to suggesting protective measures involving force.  But what if it is “only” mass murder, “merely” accompanied by the flight of four million refugees and the internal displacement of nearly eight million more?  Can this be enough for organizations engaged honorably and courageously in saving human life to say, “Mr. President, we urge you to take steps—military if necessary—to throw sand into the gears of Assad’s murder machine?”

By urging serious consideration of the details of a no-fly zone Miliband has moved within range of a positive answer.  Unless the Assad-controlled Syrian Arab Republic Government—still recognized by Washington and others as Syria’s legal government—consents to the grounding of its military aviation, a no-fly zone will be an act of war.  It would require that violations be met with deadly force.  It might well mandate the destruction of a very dense and (on paper) capable Syrian air defense network.  All of this may be perfectly justified given the sheer scope and shamelessness of the Assad regime’s unrestricted warfare against defenseless Syrian civilians.  But whether or not President Obama would be willing seriously to consider kinetic options for protecting Syrian civilians will depend, at least in part, on the pressure he gets from organizations for which civilian protection is the top priority and value.

The problem with a public debate about the specific ways and means of civilian protection in Syria is that it gives the Obama administration ammunition to shoot down policy alternatives, as opposed to helicopters bearing barrel bombs.  Getting into the “details” of a no-fly zone illustrates the point perfectly.  The administration’s response to date has been one of “It’s an act of war, we’d have to engage violators, we’d have to bomb anti-aircraft sites, case closed.”

Instead the public debate should center on the propriety of the United States doing nothing of a protective nature in the face of the twenty-first century’s premier humanitarian abomination.  Let the commander-in-chief and his military advisors decide how best to complicate, frustrate, and otherwise mitigate the ability of the Assad regime to commit mass murder and inflict mass terror with absolute impunity.  The center of gravity in this debate is the heart and brain of Barack Obama – not the details of no-fly zones, protected zones, safe havens, air exclusions zones, and the like.  First, persuade the president of the importance of protecting human beings.  Second, tell him that military countermeasures to complicate the application of mass murder and terror are indeed justified.  Third, let him and the professionals decide how to do it.

Miliband and Burns also point out that a decision on a no-fly zone (or, one would presume, other kinetic measures) “cannot be divorced from the wider imperative for progress toward a political settlement in Syria.”  This is absolutely correct.  The relationship between limited military countermeasures to slow down or derail the express train of civilian slaughter and a political-diplomatic process must be seamless.

Secretary of State John Kerry recognized this connection soon after taking office, when he noted that the Assad regime’s “calculation” toward a peaceful, negotiated political transition would have to be changed.  But all of this had been subordinated to a nuclear negotiation with Iran that the administration hopes and prays will transform Tehran’s behavior in the region, including its full support for Assad’s murderous survival strategy in Syria.

Yes, Iran (and Russia for that matter) must be engaged “in a diplomatic initiative to help stabilize a shattered Syria.”  This will require in the first instance that the Obama administration acquire the will and ability to do two things at once: brace Iran on its support of mass murder in Syria as it tries to come to closure on the nuclear agreement.  Making Syrian civilians pay the price for a unidimensional engagement with Iran and a misguided decision not to ruffle Tehran’s feathers over Syria is neither honorable nor practical.  And steps taken to gum-up Assad’s barrel bombing apparatus might just change the calculations of those who today count on American indifference.

Burns and Miliband have spoken eloquently and have done a real service.  What must happen now is for organizations dedicated to the protection of civilians to bite the bullet tabled by David Miliband.  The principle on which these organizations choose to stand can influence decisively what President Obama decides to do.  And it can affect the fates of tens of thousands of Syrian civilians now slated for death, disability, terror, and flight.