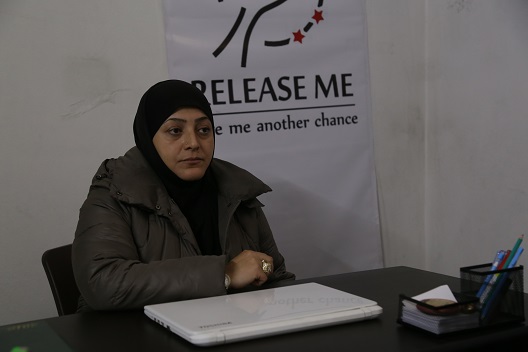 Across Syria, thousands of men have been held captive by the Syrian government, some languishing for years in detention for their political activities, their refusal to join the army, or just by virtue of being related to people who oppose the dictatorship. Less talked about are the experiences of women who are arrested and held in captivity, raped and tortured, and the struggles they endure if they are eventually released. They can face unemployment, trauma, and even be shunned by segments of their communities. In the Northwestern city of Idlib, one of the last areas of the country still not under control by the government, a group of women are trying to help bring these former prisoners back into society. ‘Release Me’ is a local support group turned non-governmental organization based in Kafar Tahrim started by Walaa Ahmad, a former prisoner herself, in August 2018.

Walaa Ahmad is from Damascus and was an activist in the uprising. The Syrian regime arrested and detained her from 2013-2017. She’s very reluctant to talk about her time in prison, but feels it’s important for people to know what happened to her and other women. Walaa was released in 2017 through a prisoner exchange agreement between the government and an opposition group. After her release Walaa found herself being forcibly transported to Idlib, a city which she had never visited before. “I came out of prison and I’d lost my home and job. And then I was forced to leave to another part of the country.” Walaa’s family left Syria while she was imprisoned, but now support her financially.

Walaa couldn’t stop thinking about the many other women in prison being physically tortured and mentally traumatized. Most have nowhere to go after their release. In the house she rents, she started to host former female prisoners. This was the genesis of the Release Me center she started with the help of some friends; it is dedicated to supporting these women. Release Me provides a new start to thirty women and their children. Walaa added, “we need a second revolution for women’s rights.”

The center is located in a basement and consists of four rooms where woman can cook, sew, and attend classes focused on women’s and civil rights. Release Me relies on funding from NGO’s and private donations, but it is getting harder to obtain. When they have enough funding, they also support the woman with counseling sessions. “It also helps me deal with my depression and trauma,” she added.

Shahid, a 35-year-old mother of five, used to be an English high school teacher and is now supported by the group. “I lost my memory in detention, I couldn’t remember the faces of my children, husband, or parents.”  In prison, Shahid was repeatedly tortured through electrocution, strapped dangling from a wall, and badly beaten all over with significant trauma to her skull; which is how she lost her memory. “They used to wake me up at 1am to torture me.” She added, “they are merciless.”

Shahid suffered in prison not only from her own abuse, but also from watching several others tortured to death in front of her. Shahid’s family, husband, and children didn’t know anything about her for several months while she was in detention. Before being detained, she had left her five-month-old twins with their father. “When I came out of the prison I learned that one of my twins had died.” Three years after leaving the prison, Shahid is not only dealing with the scars on her body, but the mental scars of what she experienced. Shahid said, “there’s still many men, women, and children in prison that we don’t hear about.” Shahid has lost so much, including her health, career, and a child, but she says, “I want the world to know about the many others who are still suffering there now.”

Reem is 31 years old, and previously worked as a music teacher from a village in Idlib province. Reem now works at the Release Me center. She was arrested at a checkpoint, blindfolded, and moved to an unknown destination. She was accused of being an activist that supplied food and medicine for families of the opposition. She was transferred a few times until she found herself in a stadium. “I was scared because I was the only woman and lots of men were screaming from torture.” After a day in the stadium, the security services started to torture her, too.

Reem was transferred to a prison in Damascus where she spent the next four years. “I forced myself to forget all my memories in prison, because I don’t want to remember anything that happened there.” Reem encounters stigma from her community associated with her experiences in prison. “The question they keep asking me is ‘Have you been raped?’” She doesn’t answer the question because it’s too painful for her. “I don’t want to see anyone except the women from Release Me, because they are the only people who understand me without explaining anything.”

Fathia had been raising her six children alone since her husband passed away in 2007. She was also taken from a checkpoint, accused of demonstrating, and was detained for forty-seven days. “I am an old woman, I’m sixty-five years old, how could they do that to me?” Fathia said, “they forced me to stand for forty-eight hours, and they threw water over me.” She was blindfolded most of the time and given very little food. Now that she’s been released, she rarely goes out at all, except to go to the Release Me center.

All these women were tortured and imprisoned, but eventually released and returned to their families. Yet, other families still wait for news of loved ones detained by the regime. According to a report by the Syrian Network For Human Rights (SNHR), there have been at least 95,000 forcibly disappeared persons in Syria since March 2011. At least 13,608 have died due to torture between March 2011 and August 2018. Among the many prisons and detention centers run by the regime, the whereabouts of most detainees remain unknown. Amnesty International and Human Rights Watch, in addition to several others, document and continue to report about ongoing torture abuses by the Syrian regime.

Despite recent announcements listing the deaths of prisoner detainees in the summer of 2018 by the government, no relief is in sight for the those still detained. The United Nations continue to urge member states to push the Syrian regime for information. However, the regime has not entertained discussing the issue of detainees in past negotiations when it was in a weaker position, and it is highly unlikely it sees any reason to do so now. The regime is at its strongest position since the conflict began eight years ago. As the regime enjoys ongoing support from Russia and Iran, and the Arab League continues to debate readmitting Syria, there is little the opposition or other forces can do to persuade the regime that releasing detainees is in its interests.