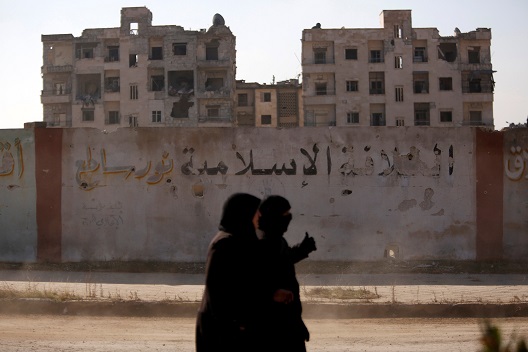 In the shadow of Hay’at Tahrir al-Sham’s takeover of Idlib province and the conflict between it and the Syrian Liberation Front (Jabhat Tahrir Souria), it is difficult for women to work in any profession. The laws are designed to prevent women from leaving their homes to do any work. So how would a woman of the region, if she so chose, be able to work in journalism?

After the Syrian revolution against Syrian President Bashar al-Assad’s regime in 2011 and the subsequent loss of territory under his control, the media profession became common and widespread, but most of the known and active journalists were male. At the same time, however, many women who worked in opposition and other rebel areas played a major role in media work.

Dima, a Syrian citizen, taught at a school in rural Idlib before 2011. The revolution and its subsequent developments drove her to become a journalist. She said, “I entered the media industry because I love this profession and I love being the one who conveys the truth and reality of our time and the difficult circumstances taking place in the country.”

Despite the dangers in her work, she did not back down from honing her skills, working in rural Idlib and other relatively accessible areas. Dima has published articles in many Syrian and Arabic websites and magazines. “There are a number of risks, the most important of which is to reveal the abuses of some military officials in your area, at which point you become public enemy number one,” says Dima. “This makes me cautious in collecting information, obtaining permits, and publishing my work under aliases. Even though I like to publish my reports and features under my real name.”

But the risks do not end there; simply being a working female is a danger in itself. During her work, Dima confirms that she always notices the signs of surprise at everyone she meets when they learn she works as a journalist. “There is a general amazement in the community when they see that I’m recording someone in a public place, which makes me feel embarrassed,” she says. “Sometimes I use my contacts to get information from certain people, or I get their numbers and talk to them via the Internet.”

Last year, the Syrian Journalists’ Association issued a special report titled “Women Journalists in Syria: Reality and Challenges,” which discusses the hurdles women journalists face in Syria. According to the Syrian Center for Press Freedoms, the organization that prepared the report, “22 violations of media rights have been documented in Syria since the beginning of the Syrian revolution in mid-March 2011, including the killing of four women journalists, 12 arrests and kidnappings, and six more incidents of injury, beatings, threats and intimidation, and pressure to restrict their work in media.”

The report also addressed the reality of women’s work in journalism in Syria before March 2011, noting that “it did not depart from the standards applied to all other areas of life; like other aspects of community life, it served as a means to cement tyranny and used as an important weapon to subjugate the people.” At the time, employers exploited women—who did not view them as journalists in the same way as men. Women often needed a ‘wasta’ or special relationship to find work in journalism and for protection from others.

Sarah al-Hourani, a journalist working in Daraa and who began her career after the start of the revolution, explains that her move to journalism is a way for her to provide “support for the oppressed and document the crimes and violations of Assad’s forces. The media is an important weapon in relaying the people’s suffering, especially those groups that have no voice and no power.”

Al-Hourani dove into varied experiences during her work and faced many risks, most notably possible arrest by the Syrian regime and shelling during military operations in Daraa. Because she is a female journalist, she struggles to move from one area to another and fears what could happen at rebel checkpoints along the way.

After all these years, al-Hourani says, “My goal is to reveal the truth: that we took to the streets against a regime that committed the most terrible crimes against its people, and the children of the revolution. I advise women journalists in Syria to be ready to carry a heavy load, face even heavier challenges, and find a way to adapt to ever-changing circumstances.”

Despite the complexity of the situation in most Syrian cities, many women journalists face similar challenges to those with which Dima and Sarah contend and places them in greater danger. Some of them are satisfied to work as activists as a way to make their voices heard—such as women activists and journalists in the besieged Eastern Ghouta, which suffers from a violent campaign by regime forces in recent days.

Ward Mardini, who worked as a correspondent for Syrian media after the revolution, lived through the siege and reported what she witnessed there on her Facebook page before she disappeared a few days ago from virtual life. She wrote, “Today I want to tell you a lot…I want to tell you about what I’m seeing, far from the noise and rhetoric. I want to speak for every person with me in the shelter who cannot speak for themselves. I am in a shelter with more than two hundred people. Most of them are women and children. All of them want this nightmare to end now. They are all tired of the shelling and the siege. They all dislike the statements of solidarity because it gives the regime additional time to kill more of us. We can no longer process what we see around us.” She concluded her post describing the situation in the besieged Eastern Ghouta, under heavy bombardment for weeks, and loudly criticized opposition parties and factions that could not protect those who are trapped there.

Mardini displays the strength of women in these circumstances. Facing death and siege, she carries out the task of transmitting news and conveys messages from unheard voices. She and her media colleagues sum up many of the situations in Syria as they are subjected to more than one revolution—a revolution against an unjust regime, another against a society, and a third against traditions that impose difficulties on their right to choose their profession.