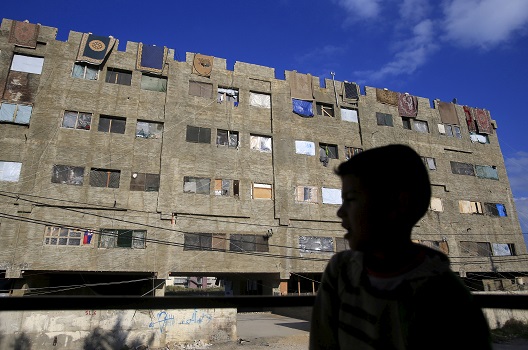 Photo: A boy walks inside a compound housing Syrian refugees in Sidon, southern Lebanon February 3, 2016. Lebanon has weathered five years of Middle Eastern turmoil remarkably well but its stability should not be taken for granted and it needs long-term financial help to cope with a huge number of Syrian refugees, a senior U.N. official said. To match MIDEAST-CRISIS/LEBANON REUTERS/Ali Hashisho

At the onset of Syria’s uprisings in 2011, Lebanon was the first stop for Syrians fleeing Bashar al-Assad’s regime and military service in the army. Lebanon and Syria share similarities in customs and traditions which has provided a sense of home to those fleeing nearby Damascus province and other Syrian towns. Yet, shifting conditions are now pushing out a larger number of Syrians who chose to remain in Lebanon.

Ahmed Zaghloul is a Syrian national who sought refuge in Lebanon outside the confines of a refugee camp. In August 2013, Zaghloul traveled to Lebanon and to Turkey, where he stayed for three months before deciding to move back to Lebanon’s capital. “I chose the stability of Beirut because of its close proximity to Damascus. In Turkey, I did not feel at ease with the lack of solidarity. Before Turkey began implementing visa restrictions on Syrians, life in Beirut was somewhat stable; but the situation has been worsening over time,” Ahmed explains.

According to the United Nations Refugee Agency (UNHCR), over one million registered Syrian refugees live in Lebanon. However, with most Syrians living outside the camps and thousands of them not registered with UNHCR, the actual number is likely much higher.

Away from the Syrian refugee camps in Lebanon and the hardships faced by those within them, there are Syrians attempting to reach normalcy; renting homes and working. Still, their living conditions, like Ahmed’s, are difficult.

Ahmed works at a relief organization concerned with Syrian affairs. The sense of stability that he enjoyed between 2013 and the end of 2014 has now disappeared. Towards the end of 2014, the Lebanese government imposed visa restrictions on Syrians entering the country and changed residency requirements. The Lebanese authorities, which previously granted Syrians a six-month residency status upon entering Lebanon, implemented in 2014 new measures and stricter conditions for Syrians to obtain Lebanese residency.

In 2015, Turkey’s imposition of new visa terms for Syrians starting in 2016 crushed the dreams of any Syrian seeking to leave Lebanon for Turkey.

As Ahmed Zaghloul explains, “Lebanon is worse in terms of obtaining official papers. Most Syrians violate the terms of their residency because the supporting documents are difficult to obtain. In addition to the complexity of the country’s already incomprehensible residency requirements, the process of the Lebanese General Security in dealing with Syrians who want to renew their residency is carried out poorly.”

Activist Tariq Awad Zaghloul shares this view that the toughest issue faced by Syrians in Lebanon is that of residency and job opportunities. This has become all the more difficult after new laws enacted in 2015 stipulated that Syrians must pledge not to work if they wish to obtain residency.

While completing his graduate studies in Lebanon, Tariq spends much of his free time working with the refugee relief organization Syrian Eyes. Like Tariq, other Syrians work with relief organizations, a sector in much need for support and aid from international agencies concerned with immigrants, refugees, and displaced populations. The large number of Syrians, coupled with little prospects to return home, makes it impossible for Lebanon to carry the load on its own.

Moreover, the Lebanese government has made it compulsory for all Syrians seeking residency to have a Lebanese sponsor. The latter pledges to the General Security that he or she will be fully responsible for them. The government has also imposed a yearly $200 fee as a housing pledge confirming that the Syrian is renting a home in Lebanon, in addition to the not working. Assuming that all of these documents have been successfully obtained, security personnel and officials have considerable leeway to reject residency requests, thus adding yet another layer of complexity.

Hezbollah’s involvement in Syria alongside the regime could be viewed as a possible explanation for the hardships Syrians in Lebanon are faced with. According to many Lebanese, Hezbollah is a state within the state, in that it controls border entries and maintains airport security. Notoriously controlled by Hezbollah agents, the Rafik Hariri International Airport is a first limit to the passage of Syrians entering the country. Customs agents have refused to admit Syrians, namely “opponents of the Syrian regime and Hezbollah.” For instance, Syrian journalist Abasi Someisem was refused entry at the Hariri Airport last year and was sent back to his point of origin in Turkey.

On the other hand, some suspect anti-Syrian political factions of carrying-out kidnappings targeting Syrians. On this topic, Ahmed explains, “I was kidnapped and verbally threatened by three people in the Achrafieh district simply because I am Syrian. They released me after giving them $100. After the incident, I filed a detailed complaint with the Lebanese police, but it later turned out that my kidnappers were personnel from a branch of state security and knew all along that my identity papers were in order and that I had not violated the terms of my stay in Lebanon.”

The hardships faced by Syrians have repercussions in their country as well as for their family members in Europe, particularly after Turkey began requiring visas for Syrians at the start of 2016. Reunification interviews in European embassies in Turkey have become impossible. Moreover,  European embassies in Lebanon are now semi-closed to Syrians. Despite being arrested twice by the regime during the uprisings and for his political activities against the regime, Ahmed has been unable to get either a protection visa, asylum, or any immigrant status from any of the European countries he applied to from Lebanon.

The situation for Syrians living outside of refugee camps in Lebanon is also complicated. Lebanon is burdened with refugees and has a political class that is completely out of touch with Lebanese citizens and their concerns. As of 2016, Lebanon has a population of over 4.4 million with an additional four hundred thousand Palestinian refugees and now over one million Syrian refugees, according to the CIA factbook. These numbers are causing a considerable strain on Lebanon, whose infrastructure cannot withstand these numbers, and which receives insufficient aid from the international community.

This situation could implode at any moment, particularly if Lebanese politicians and officials blame displaced Syrians for the situation that the country is in. This was made evident last February by the Lebanese Minister of Energy, Cesar Abu Khalil, when he said, “If it was not for the Syrian crisis, we would have electricity twenty-four hours a day.” Indeed, some believe that many Lebanese officials exploit the presence of Syrians to avoid solving the country’s service problems.

Undeniably, there are a lot of similarity between Syrians and the Lebanese at the present moment. Tariq remarks that, “other than residency and work, Syrians have no problems in Beirut. I think that the harassment is over. No one has the energy for these kinds of problems anymore.” Zaghloul notes on the shared concerns between Syrians and Lebanese: “Even Lebanese youth are looking for other solutions. I mean, living in Lebanon is difficult in all respects: there is no infrastructure, no social stability, and the young people’s future remains uncertain.”