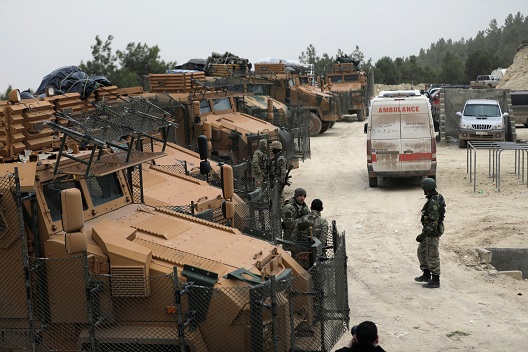 Following news that Turkish forces and their Syrian opposition allies’ intend to enter Afrin and Manbij, both under the control of the Kurdish Syrian Democratic Forces (SDF), Turkey now faces its greatest challenge in Syria to date. This challenge comes at a time when the United States, Russia, Iran, and the Syrian regime have divided up control of the strategically important parts of Syria, most notably the Syrian desert which connects all the country’s provinces as well as being home to its mineral wealth. Perhaps more importantly, this coalition also fought together to defeat the Islamic State (ISIS, ISIL, Daesh).

Amid the search for a solution to the Syrian crisis, the same crisis has itself had a significant influence on the changing relations between regional and international actors. The most important shift in relations has been the rapprochement between Russia and Turkey. The two countries drew closer together after relations between Turkey and America grew increasingly tense following America’s decision to fight alongside the Kurdish SDF against ISIS. The failed coup in Turkey also had a negative effect on US-Turkish relations, as Ankara accused the American government of being behind the coup. In addition to this, Turkey found itself in an isolated position within NATO after the US left Turkey to stand up to Russia alone following the Turkish downing of a Russian jet in November 2015. The United States, with Europe following suit, withdrew from the Syrian conflict, allowing Russia to intervene militarily, exhausting the Syrian opposition to face the Syrian regime and its allied militias, Iranian-backed militias, and Russian airpower.

This Turkish-Russian rapprochement manifested itself more clearly during the Astana talks, as Turkey found itself in the challenging position of the guarantor that ensured the Syrian opposition implemented the so-called de-escalation agreement. Turkey pressured the opposition into taking part in the Astana talks, and the opposition was unable to oppose Turkish pressure; Turkey had agreed that Iran, alongside Russia, would be a guarantor to the Astana talks. It is likely that opposition groups were at a loss to take any particular stance, especially one which would involve rejecting instructions from international actors and those supporting the Syrian revolution. Turkey is the opposition’s closest ally and is also the only land passage by which weapons, ammunition, and humanitarian aid can cross into the liberated parts of Syria. As such, any tension between opposition groups and Turkey would have negative consequences for the wider revolution both in military and humanitarian terms.

Russia, for its part, capitalized on rising tensions in US-Turkish relations. Save for Syria, Russia has no foothold in the Middle East and the Mediterranean, and therefore does not want to see the Syrian regime fall, as this would spell the end for Russian presence in the region. For this reason, Russia sought to draw closer to Turkey so that the latter could act as a guarantor for the Syrian opposition in the search for a solution to the Syrian crisis, which has only grown more complicated over time.

Turkey, on the other hand, does not enjoy good relations with the international actors involved in Syria including the United States, Europe, and Saudi Arabia, especially in light of the outbreak of the Gulf crisis and Turkey’s close relations with Qatar. It was in this context that the Russians exploited Turkish desire to distance the United States and other regional and international actors from the situation in Syria as much as possible. This, however, will render Turkey weak in the face of Russia and Iran both politically and militarily, which consequently will weaken the Syrian opposition as a whole.

Russia has also contrived to entangle Turkey in a number of issues which have put it in an embarrassing position in front of the Syrian opposition and people. The first of these issues was the Turkish regime’s unwillingness to fight Syrian regime forces when they cut off the path to the Free Syrian Army (FSA) during the battle of the Euphrates Shield. The regime blocked the FSA’s route, leaving the FSA unable to proceed in fighting ISIS in the countryside around eastern Aleppo and west of Raqqa. Ultimately, Operation Euphrates Shield went only as far as the city of al-Bab before coming to an end.

The most significant situation was Turkey’s acceptance of Iran as a guarantor in the Astana talks. In addition to this, Turkey also took no action following the serious violations and massacres perpetrated by the regime and its Russian and Iranian allies after the signing the ‘de-escalation agreement’, including most recently and significantly the Syrian regime forces attacking eastern Idlib.

The regime has restored its control over vast swathes of territory, as well as forcibly evacuating almost half a million people from this region in order to gain access to the Abu Duhur military airport and secure the Hama-Khanasir-Aleppo road. Russia also put considerable pressure on Turkey to fight Jabhat al-Nusra in Idlib on the basis that it is a terrorist organization. However, this never came to fruition, with Turkey instead limiting its actions to a few observation posts in northwest Aleppo overlooking the front line with SDF troops in Afrin.

Turkey’s exposure as a weak player in the face of Russia and Iran has led a number of armed opposition groups, key figures in the Syrian revolution, and a broad swathe of Syrian society to lose faith in Turkey’s ability to secure gains on their behalf in the war, or at least to stop the losses.

A number of analysts and Syrian decision makers are aware that Turkey is ready to risk the trust of a number of actors, most significantly the Syrian opposition, in return for domestic gains relating to national security, which revolve around fighting the Kurdistan Workers’ Party (PKK). This is especially the case now that Turkey is convinced it is not capable of acting alone against Russia and Iran. This viewpoint is based on the progress being made by Syrian regime forces south-east of Idlib;  east of the train line. It is assumed this military gain is the result of secret agreements made as part of the ‘de-escalation agreement’ reached in Astana. It is alleged that this progress made by the regime is in return for Russian permission for Turkish forces to go into Afrin, allowing them to secure their targets there. This suggestion has further entrenched the silence of the Syrian regime on the topic of this battle for Afrin. It is not lost on the opposition that were the Turkish army and the FSA to take control of Afrin, they would be in direct contact with regime forces in the villages of Nubl and al-Zahra.

What the battle for Afrin might look like is not yet clear, as the mobilization and military preparations seen so far are not yet in keeping with official Turkish statements on the matter. The potential military scenarios for the battle range from a complete invasion of the Afrin area to a limited intervention along the Turkish border. A complete invasion would likely lead to damage of infrastructure in Afrin, which is as yet relatively intact, as well as resulting in loss of life in the Kurdish villages, thereby exacerbating the split between Arabs and Kurds in Syrian society.

The Syrian social fabric is already suffering from a fragmentation which is deteriorating on a daily basis, particularly after the SDF helped regime forces besiege Aleppo and subsequently take control of it. On top of this, the SDF has also targeted Arab villages in the Euphrates Shield area on a number of occasions, leading to the death of a number of people, including children. Finally, in the event that a Turkish intervention in Afrin is successful, it would pose a significant challenge in terms of running the area in the aftermath, and in finding a civilian administration to take on this task.

The battle may be restricted to establishing control of the city of Tal Rifat and the ten surrounding villages which the SDF took control of in 2016. The villages in question are Arab villages whose inhabitants are enduring a difficult experience living in camps following their eviction from their villages by the SDF. The Turkish forces may then proceed towards Sheikh Uqayl Mountain to the west of Aleppo where they established an observation post in November 2017. In this way, the Turkish forces would have connected the countryside north and west of Aleppo to a narrow land passage which would fall between the regime forces to its east and the SDF to its west. This latter option would be preferable to the Syrian revolution and the FSA units who can then legitimately re-take control of the aforementioned villages occupied by the SDF, as well as opening a route to Aleppo’s western countryside and Idlib.

At the same time, the military priority for the Syrian opposition is putting pressure on the regime forces to reduce the severity of the siege on Eastern Ghouta, an area suffering from a humanitarian crisis which is the worst the Syrian revolution has witnessed thus far. Another pressing matter is that the opposition opposes any secessionist project or attempt to divide Syria.

It should also be noted that there is a possibility that Russia—which has a military base in the Afrin region—could pressure the SDF to retreat from Afrin into the regions of northern Syria, thereby sparing the area from a war which is bound to an unforgiving one, as the SDF have built a formidable defensive line in the Afrin area consisting of trenches and tunnels. In return for such an intervention from Russia, Turkey would have to give its assent to Russian preconditions for the Sochi conference which Russia is intent on being successful; especially in front of the international media. On the other hand, nothing of this sort may take place if Russia prefers to leave Turkey in a costly and difficult situation fighting the SDF. Perhaps Russia will even secretly provide the SDF with weapons and ammunition with which to fight the Turkish army.

What form the Turkish intervention takes and the nature of this upcoming fight will further elucidate the status of relations between Turkey, Russia, and the United States. The tension in US-Turkish relations has already cast a dark shadow over the thorny and complex Syrian war.  With every fresh escalation between the two sides, the Syrian opposition and the Syrian people have paid a heavy price for the rivalry between regional and international actors.