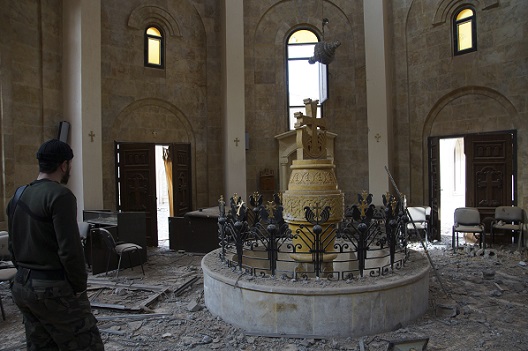 Once home to a bustling community of Christians, church bells have not tolled in Deir Ezzor for three and a half years. Whether intentionally or collaterally, regime, the Islamic State (ISIS), and the Nusra Front have destroyed Deir Ezzor’s churches. Now, only memories remain of the city’s four churches and those that attended them.

When the first peaceful protests against Assad’s rule began in early spring 2011, less than ten percent of Deir Ezzor’s Christian population joined anti-regime demonstrations. According to Amer, a Christian protestor who participated in these early demonstrations, Christians were reluctant to demonstrate against Assad because of their minority status. Amer explained, “…minorities the world over covet safety above all else. During the revolution’s initial stages, the regime was still protecting Christian and minority rights in Syria.”

As peaceful protests against Assad gave way to violent conflict in 2012, Christians in Deir Ezzor tried to join the moderate opposition, but it refused to allow Christians to join. Christians found themselves caught between the regime’s indiscriminate bombings and the lack of protection offered from the armed opposition. Therefore, Christians decided to flee, leaving behind their homes and churches.

Prior to the outbreak of war, four distinct Christian sects flourished in Deir Ezzor, each of which had its own church. The Syriac Orthodox Church, the largest of these denominations, accounted for over 50 percent of the city’s entire Christian population and prayed at Al-Sayyida Maryam al-‘Adhra’ (Our Lady the Virgin Mary)in the al-Rashidiyya neighborhood.

Due to its close proximity to one of the regime’s military security offices, in June 2012 Al-Sayyida Maryam suffered moderate damage during fierce clashes between the moderate opposition and the regime. Shortly thereafter, further harm was inflicted to the church when the regime shelled the area after the opposition gained control of the neighborhood. Following the Nusra Front’s mistaken—as it claimed at the time—detonation of a car bomb in front of the church during a battle with regime forces in October 2012, only a few sections of the churches’ walls remained standing.

Capuchin, or Latin Christians, accounted for the second largest Christian community in Deir Ezzor and attended Yas’u al-Malik lil-‘Aba’ al-Kabushin (Christ the King for Capuchin Priests). Situated next to the city’s military police headquarters, the Capuchin church became an important forward-operating base for the regime. Its snipers situated along the building’s roof routinely targeted innocent bystanders in nearby liberated areas.

By late 2012, opposition forces and a contingent of the Nusra Front fighters reached the area surrounding the military police headquarters. Intense fighting ensued in and around the Capuchin church. Clashes raged on for four months with neither the opposition nor the regime gaining ground, until Nusra dug a tunnel underneath Fouad Cinemas Street to the church’s midpoint and packed the tunnel full of explosives.

In April 2013, Nusra detonated the charges, destroying most of the church. Nusra said the demolition of the church was justified because it was blocking the opposition’s efforts to reach the military police headquarters and because regime snipers used the building to shoot at passersby. Nusra also claimed it was not one to blow up other religion’s places of worship, as evidenced by the fact that it had not destroyed an Armenian Church located firmly within an area of its control.

Syriac Catholics comprised the third largest Christian denomination within the city, the followers of which hailed entirely from two large families. Heavy regime bombing of al-Rashidiyya neighborhood upon the armed opposition’s arrival in July 2012 quickly brought about the destruction of the Syriac Catholic Church.

The Armenian Orthodox made up Deir Ezzor’s smallest Christian sect. They worshipped at the Shuda’ al-Arman (Armenian Martyrs) Church, located in the western reaches of al-Rashidiyya near the heart of the city. Since 2012, these areas have been and continue to be subject to constant regime shelling and airstrikes.

On July 14, 2014, when the ISIS succeeded in wrestling control of most of Deir Ezzor away from both the regime and opposition, it initiated a systemic campaign to eradicate all forms of worship it deemed un-Islamic. ISIS demolished the Armenian Church in September 2014.

Opinion differs sharply as to who should be held responsible for the litany of crimes committed against Deir Ezzor’s Christian community. Some, such as Zaher, a Christian from Deir Ezzor, fault the moderate opposition for entering the city in the first place. “When the Free Syrian Army began operating in residential areas, Assad’s forces started attacking these areas. Naturally, indiscriminate regime artillery and airstrikes, waged using old and imprecise weaponry, fell on nearby churches.” However, he concluded with, “The regime sends a message to all Syrian sects that it does not care about any sect or any religion when (they) come near its throne.”

Others blame the regime or extremistgroups for the many ills visited upon the community. Still others, such as Adnan, fault the Christian community in Deir Ezzor itself. “Christians, with their flight from the city and silence throughout these years, have allowed everyone to violate their churches, and to do what they have done with pausing to consider or facing any consequence. The Christians (of Deir Ezzor) have not even held a demonstration to demand that all sides stay away from their places of worship.”

Assigning blame for the loss of Deir Ezzor’s Christian community and destruction of its churches is unproductive. That the fighting, as well as the mass exodus of the city’s Christians, has irreparably damaged the city as a whole is indisputable. Deir Ezzor has lost a key component of its history, culture, and identity, as a community of between 5,000 and 10,000 individuals is now entirely absent. The city’s remaining Muslim residents will no longer hear the ringing of church bells, intermingle with their Christian friends and neighbors, or build relations between the two religions.

Fikram is a civil activist from Deir Ezzor. He worked as a paramedic on the fronts, in the media with Alwan Team, with the human rights organization SAMA, and writes for Good Morning Syria.