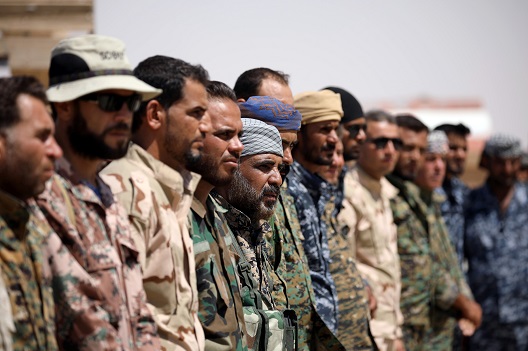 Increasing tensions are hurting the relationship between the Kurdish-led Syrian Democratic Forces (SDF) and the Arab tribal Syrian Elite Forces (SEF) at a time when both groups are cooperating in the battle for Raqqa. On August 25, seven units from the SEF, whose fighters are largely from Deir Ezzor province, defected and joined the SDF’s recently-formed Deir Ezzor Military Council—the coalition of forces that the SDF and the United States are establishing in preparation for the anticipated battle to drive the Islamic State (ISIS, ISIL, Daesh) from Deir Ezzor. While the SEF seemingly remains part of the Raqqa operation alongside the SDF, the prospects for the two groups collaborating are bleak. Recent tensions may increase, and, given the small size of the SEF, the tribal force could find itself worse off if it gets pushed out of the battle for Deir Ezzor and loses US support.

Thus far, two issues are making relationships between the SDF and the SEF strained. One is their conflicting political agendas for how each view what Syria, or at least its northeast, should look like. The other is that both groups have different objectives for governing Arab-majority areas once ISIS is defeated, whether in Raqqa or Deir Ezzor.

The SEF, established in May 2016 by tribal leader and former head of the mainstream Syrian political opposition Ahmad al-Jarba, built an alliance with the SDF in November 2016 that made the SEF a partner force in the anti-ISIS operation for Raqqa. Unlike other Arab groups participating in the Raqqa operation, the SEF is not a member of the 50,000-strong SDF. All other Arab groups are members of the US-formed SDF umbrella and operate under its central command, having their individual visions largely subsumed into that of the SDF’s biggest and dominant contingent, the Kurdish Peoples’ Protection Units (YPG). While the SEF promotes itself as a partner of the international anti-ISIS coalition, the United States and the SDF seem to have used the SEF tribal nature and connections in the initial part of the operation to reach out to leaders of Arab Raqqa tribes for political support. In part because of the SEF, the SDF did not lack manpower for the Raqqa operation.

However, the two groups’ agendas remain far enough apart that their ultimate disagreement was expected. The SDF, led by the YPG, has no anti-Assad project like the SEF, whereas the fighters who formed the SEF were once members of the Free Syrian Army’s 2014 Deir Ezzor Military Council, which disbanded after losing to ISIS in the infamous Shu’aytat Massacre.

Further, the SEF is linked to a Cairo-based opposition political party called Tayyar al-Ghad al-Soury (Syria’s Tomorrow Current, STC), which, since the news of the defection, has been reinforcing on its website a national vision for the country and that relations with the SDF continue. However, it also stated that the SEF should receive more support from the United States and should have a role in Syria’s future, an indirect criticism of the fact that the United States gives more support to the SDF. The SDF, on the other hand, answers to its political authority represented by the Syrian Democratic Council (SDC), founded in 2015 and predominantly controlled by Syrian Kurds, that want a federalist system for all of Syria that would ensure Kurdish autonomy in the northeast.

The original alliance between the SEF and the SDF was one made between their political leaderships: the STC on behalf of the SEF and the Kurdish Democratic Union Party (PYD)—the political wing of the YPG, dominant party on the SDC, and ruling power in the autonomous areas of northeast Syria—on behalf of the SDF. The two leaderships signed a memorandum of understanding in September 2016 in Cairo outlining the need to cooperate to find a solution to the Syrian crisis. In a June interview with the author, a spokesperson of the STC, Monzer Akbik, said while the PYD and STC agreed on the partnership they did not agree on federalism, “but only decentralization.”

The other point of tension is the role that the SEF thinks it should play in governing Arab-majority areas after the defeat of ISIS. With the SEF being brought out to assist in the Raqqa operation, the Arab force was looking at gaining a governing role in post-ISIS Raqqa, given that the SEF contains fighters from Raqqa tribes. Akbik also said that the SEF was in discussions with the US-led coalition and the SDF on a potential role for it in governing Raqqa. Then, in August, the SEF started to criticize the United States for not having a clear strategy for how governance would be handled in Raqqa and Deir Ezzor after defeating ISIS, suggesting that the SEF was not granted the role it desired. Despite the SEF ostensibly accepting to work with the SDF—unlike other mainstream Arab opposition groups—the SEF seems firmly in opposition to Kurdish governance expanding into non-Kurdish areas.

While the SDF welcomed cooperating with the SEF militarily, the Kurdish-led force is uncomfortable with an Arab group that does not subscribe to its vision and does not follow its direct military command. Disagreements between the two sides in July were reported to have the SEF almost withdrawing from positions it held in Raqqa. The defection of SEF fighters to join the SDF’s Deir Ezzor operation does indeed strengthen the SDF’s dominance in the northeastern region. Since the beginning of the partnership between the two groups, the SEF aimed to maintain its independence and not fall under the SDF. The SEF spokesperson, Mohamed Shaker, told the author in June that they are unsatisfied with the amount of military support the group receives from the United States but also, notably, that it comes through the SDF channels and not independently to them as a group independent from the SDF.

The SEF claims to have between three thousand and three thousand and five hundred fighters among its ranks. The defection was reported to be around three hundred soldiers but remains unconfirmed. However, pro-Kurdish news sources claim that the SEF is only one thousand strong.

Members and leaders of both the Kurdish-led SDF and the Arab SEF have suffered at the hands of ISIS and are driven by personal antipathy to counter the terror group; however, their political objectives for post-ISIS Syria are beginning to surface and hurting their relationship. Given the small size of the tribal force, the lack of military equipment and training, and weak ties with the United States in comparison to the SDF, the SEF could lose more of its fighters to the SDF. As it continues to challenge the SDF, the SEF risks losing more fighters. At this point, it remains to be seen whether the two sides will ignore their differences and instead focus on fighting ISIS. If relations continue to worsen, it would harm the SEF more than the SDF, especially given the United States’ strong support of the SDF to the near exclusion of other groups in northeast Syria.

Abdulrahman al-Masri is a journalist and analyst who focuses on Middle East politics and security and foreign policy. He is also a SalamaTech fellow at The SecDev Foundation, focusing on information warfare and digital safety in Syria. Follow him on Twitter at @AbdulrhmanMasri.