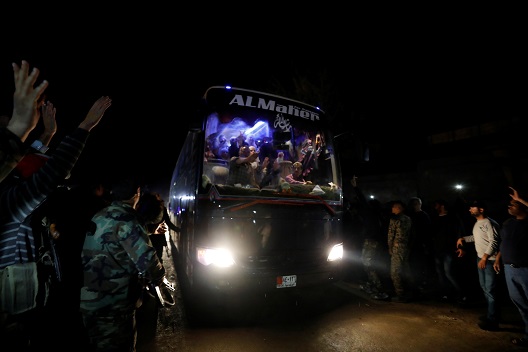 A bus carrying freed hostages and rebels who were evacuated from the rebel-held city of Douma drives as members of Syrian forces of President Bashar al Assad gesture, at Wafideen camp in Damascus, Syria April 8, 2018. Picture taken April 8, 2018. REUTERS/Omar Sanadiki

The Alawite community, a Muslim sect from which the Assad family originates, has long been a major support base for both Hafez and Bashar al-Assad. Current estimates of the Alawite population place the group around 10 percent of the 22 million population. The regime historically favored Alawites giving them military and security positions within the government which granted them unspoken powers of influence across the state.

This cronyism set the stage for disenfranchising the historically oppressed Alawites and further isolating the community from the rest of society. The Alawites are by no means an innocent group as many took full advantage of their vaulted status in the government and military. Alawites were often perpetrators of crimes against civilians as they made up the majority of ‘shabiha’ gangs meant to terrorize society into submission to the regime.

The Alawite’s self-inflicted isolationism and steadfast support for the regime assured their security, though it put the community at a disadvantage. Loyalty to Assad came at a high cost as they became targets of human rights abuses due to their connection to the regime. In addition to abuse by opposition groups, the regime also mistreats Alawites– militarily and legally. It is no wonder that their political allegiance is shifting.

After seven years of conflict, no Syrian community has remained untouched, even the regime favored Alawites. Due to economic instability, Alawite kidnappings, and bombings targeting their communities, this longstanding support base is no longer content with the actions of the Assad regime. Dissident behavior within the community continues from creating a Free Alawite Movement, publishing a document disassociating from Bashar, to demonstrating at a Russian embassy. The Alawite community fractured long ago, and the current battle tactics have further split the community along class lines.

The support of the Alawites is waning due to abuses and mistreatment at the hands of the regime, which sacrifices either lower class militia members at its front lines or civilians in strategic battlegrounds. Evidence indicates that ten percent of Alawite youths have been killed due to the conflict.

Recently, an intense and brutal military campaign that decimated Douma in 2018 was followed by a Russian-mediated agreement which in exchange for a safe withdrawal of its fighters and their families to the north of Syria required the release of hostages. These hostages, mostly Alawites, captured by al-Nusra and Jaysh al-Islam, were kidnapped in December 2013 during battles between the Syrian regime.

A Syrian regime-supported channel carried a live broadcast on April 4 of four buses returning kidnapped Alawites, mostly women and children, from the town of Douma, in Eastern Ghouta. The Syrian army transferred these buses to the Fayha’ Sports Hall in downtown Damascus, where hundreds of families waited to be reunited with their relatives. Many hostages are still unaccounted for as some reports indicate that Nusra Front and Jaysal-al-Islam kidnapped as many as 7,500 civilians.

Due to these sentiments and news coverage of the return of evacuees, the April 7 chemical attack on Douma, formerly the stronghold of Jaysh al-Islam, is thought by some Syrians to have been in retaliation of Alawite executions by Jaysh al-Islam and Faylaq al-Rahman, although this claim cannot be substantiated. A Syrian merchant, who declined to be named, said that among Alawites the desire for revenge against extremist groups continues.

Beyond military abuses by both the regime and extremist groups, legal issues surrounding bodies and death certificates continue to plague Alawites. To appease the public, regime forces transferred bodies of Alawite soldiers by exhuming graves left behind by Jaysh al-Islam in Douma. This allows families to bury their dead as martyrs, a special honor that grants them a military benefit to receive financial assistance.

Several Alawites shared shocking variations of how this “honor” was actualized. Bassam Yousef, an Alawite and opponent of the Syrian regime, published a short story on his Facebook page, detailing the experience of an Alawite family not receiving the body of their son—who is thought to have served and died for the regime in Douma—but that of another.

“In 2014, an officer called a soldier’s father and told him that his son had been martyred in a battle of ‘heroism and pride,’ and that the body would arrive tomorrow along with others to be buried in the cemetery of the martyrs. The entire community went to the cemetery as the bodies arrived in coffins wrapped in Syrian flags, and were immediately buried. One of the mothers sat crying next to the coffin that bore her son’s name, begging the soldiers guarding the coffins to have just one look at her son’s body before they buried him, but the soldiers refused.” The mother visited her son’s grave frequently for four years, until it was discovered that it wasn’t her son’s body.

The regime mistreats its community in other ways as well. An Alawite lawyer who preferred to remain anonymous, told SyriaSource that he interviewed women that accused the state of denying them due process.

In Latakia, dozens of Alawite mothers travel daily to the city’s judicial court to collect death and martyr certificates for their deceased army sons. These efforts are ultimately to obtain much needed financial aid, as is their legal right indicated by Syrian law. However, they are denied by officers and administrators at every turn. The women wait in line for hours, unable to secure appointments, dismissed entirely, or forced to pay bribes which rarely yield results.

Due to the ongoing security and legal struggles, more and more Alawites are becoming skeptical of the Assad regime. Ongoing horrifying human rights abuses across the state only add to their list of grievances.

“There are those who see the reconciliations carried out by the Syrian regime as a solution, there are those who believe in the need for a full peace process, and there are those who trust the Russians and their plans towards Syria,” says Alyamar al-Ladhiqani, a Syrian journalist living in the Alawite stronghold of Tartous. “Many are also skeptical of the current settlement process, which includes accepting the repressive regime; a regime perpetrating the worst crimes of the twenty-first century, and the collapse of the international human rights system [in Syria].”

Community members recently called for non-military solutions such as reconciliation with opposition groups as they seek to find alternatives to the current conflict. Alyamar states that the Alawite community once had a shared opinion regarding absolutely supporting Assad and his policies. Now, that shared opinion is no longer absolute and the community is not the stalwart support base it once was.

After seven years of conflict, many members of the Alawite community are frustrated and unhappy with the regime. Members of the community lament the mistreatment of Alawites. While some support wanes, for the majority of Alawites that support remains due to a fear of retaliation by extremist groups. The potential loss of Alawite support is another indicator of the lengths the regime has gone to ensure its own survival. Meanwhile, the long-term effects of this high cost are the loss of faith from its own community and some cases, outright rejection.