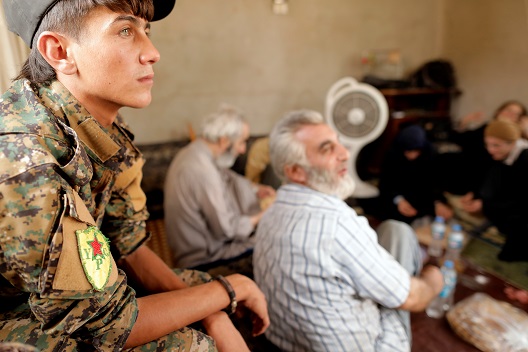 Since the beginning of the conflict in Syria, the primary ally of the US in Syria and the largest forces of the Syrian Democratic Forces (SDF), the Kurdish People’s Protection Units (YPG), recently entered into negotiations and coordination with the Assad regime to fight Syrian rebels and the Islamic State (ISIS, ISIL, Daesh). These negotiations led to several bilateral agreements, and the most recent handover of villages in the northern Aleppo countryside that the SDF seized from rebel forces.

The two key forces in the Syrian equation, agreed with international oversight—primarily Russian and American—to set up a demarcation line in northeastern Syria with the aim of preventing clashes, and to focus their efforts on battling ISIS.

The demarcation line runs in an arc from southwest of Tabqa along the Euphrates river towards Deir Ezzor, but stops short of the city itself. The line aims to mark out each side’s zone of influence, help coordinate bilateral efforts and avoid future conflict, according to statements from both sides.

This phenomenon follows major advances in the eastern Syria by regime forces that have broken the siege in Deir Ezzor for the first time in three years, with external support from Russia. Simultaneously, Kurdish forces are advancing on Raqqa, the main ISIS bastion in Syria.

The development raises a series of questions about SDF-regime relations once ISIS is defeated; experts question the future of the delineation line, whether each side will over time accept this manufactured border as the status quo, or whether they will fall into a delayed conflict to lay out the map of a  new Syria post-ISIS.

Presently, the Syrian regime seems flexible with Kurdish demands for autonomy and a federal system in Kurdistan. President Bashar al-Assad’s government does not see Kurds as the enemy, despite the Kurds’ contrasting views over the future of the country. But the regime opposes any situation in which Syrian Kurds would secede. Assad has said from the beginning that his aim is to “re-subjugate all areas in any way outside his control to his central government.”

The Kurds oppose any return to the past, with a central Syrian government that trampled on their civil rights. They are encouraged by the external support they currently receive from the international community. Despite not openly announcing an aim to secede and establish an independent Kurdistan, many indicators point to a Syrian Kurdish independence state as an objective.

Defected Syrian regime army officer, Uthman Asbro, said future ties between the Kurds and Syria will not be subject to international agreements that will emerge after the defeat of ISIS.

While Russia is working to place Damascus back at the helm of the country, Asbro said the United States is not focused on supporting its Kurdish allies once their role against ISIS concludes—simply because the US wants “to avoid any conflict with Turkey and Russia in the region.”

He said that without US support, Assad could retake SDF-controlled areas, that on the surface appear as another victory. Meanwhile, the Kurds will be forced to enter negotiations with the regime and accept its demands to avoid growing external pressure from Turkey.

Asbro said the relationship between the two sides is complex due to international alliances. While the Democratic Union Party (PYD)—the political wing of the Kurdish forces in Syria—has strengthened security coordination with the regime, it has also picked a fight with Assad by allying with the United States, a clear red line for Damascus.

These contrasting interests and visions will inevitably push the two sides towards conflict , Asbro remarked, making the regime the stronger party because the United States will avoid a major role in the conflict.

After the YPG regained control of the city of Kobane in northern Aleppo province two years ago, boosted by aid from the international coalition, it turned from defense to offense and seized several towns and cities from ISIS. But they also angered opponents by entering Arab areas such as Manbeij and Tel Rifaat, where they were accused of displacing residents to establish a large Kurdish canton.

Currently, the SDF controls nearly  42,053 square km (26,130 miles), around 23 percent of Syria, including towns and cities with populations of various ethnicities that include Arabs and Turkmen.

The demarcation line  in  Syria met with major opposition from Turkey, given that Ankara believes SDF expansion could encourage Kurdish forces to establish a Kurdish state and achieve independence—similar to the semi-autonomous Kurdish region in northern Iraq.

In this context, Kurdish activist and journalist, Ahmed Abdulnour, said the impact of the divide between the Kurds and the regime, could lead to new deals to redraw the map of post-ISIS Syria.

Abdulnour said that could see the country given new borders within a federal system. Russia imposed de-escalation zones on all sides and forced each group to stay within the zone it controls and  refrain from taking new areas— already drawing new borders in Syria due to the ongoing conflict.

He said there are other ways Kurdish forces could guarantee continued control of the areas they hold. If American forces established bases and a presence in Kurdistan to set up future development projects in areas liberated from ISIS, it would create additional foreign protection from the Assad regime and Turkey.

But how serious is the United States about protecting its ally if Russia and the regime insist on retaking these areas? Abdulnour ruled out the two major powers going to war against each other, saying that the option of reaching an understanding was the most likely outcome.

But the US Secretary of State, Rex Tillerson, has said that the United States’ objective is to restore stability to Syria. Special Envoy to the Coalition to Defeat ISIS, Brett McGurk, has said “we are committed to stabilization, and that word is very important. This is not reconstruction; it’s not nation building.”

Ever since the United States began supporting the SDF, this has caused tension with Turkey as Kurdish forces had free rein to take control of Raqqa and negatively affected the bilateral relationship between the US and Turkey.

Despite Turkey’s ongoing threats to intervene in Syria to protect its own security and prevent the creation of an independent Kurdistan, nothing has changed on the ground. Some have said this is because Turkey is waiting on American promises to protect its interests once ISIS is defeated.

If SDF controlled areas near the Turkish border are rolled back, and Arab lands are handed over to local tribes or rebel forces, this compromise could defuse tensions between the two countries.

If that does not happen, it is likely that they will a conflict could begin to secure their interests. It would not likely be a direct state-on-state war, but would see each side support proxies on the ground in order to compete for influence.

The future of the new demarcation line will depend first and foremost on agreements reached between states involved in Syria. These deals will draw the new features of the country, either through total victory for Assad and his allies, or an entire new map of a future Syrian state.