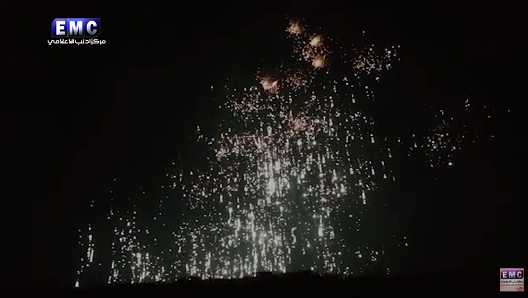 The de-escalation zone in Syria encompassing Northern Hama and Idlib Provinces is witnessing ongoing and large-scale cease-fire violations by multiple parties. Recent escalations last night showed the first use of incendiary phosphorous attacks—a flammable chemical weapon—in almost a year and targeting the towns of al-Tamanah, Sarmin, and Khan Sheikhoun all located Idlib countryside; which several reports indicate through the use of Russian warplanes.

Both armed opposition and regime forces are accused of violating the ceasefire through continual artillery and rocket bombardment in the de-escalation zone. The attacks are exacerbating a severe humanitarian crisis in Idlib. The 3.3 million residents—of whom 1.2 million are Internally Displaced Persons (IDPs) continue to experience overcrowding in shelters, lack of employment, and food sources.

The regime led attacks threaten the 2018 Sochi agreement that mapped out the current de-escalation zone. For the most part, the regime carried out the attacks without significant support from Russia or Iran since the Sochi agreement in September 2018. Both Turkey and Russia continue to maneuver diplomatically and militarily to head off a confrontation over Idlib. The potential collapse of the de-escalation zone risks creating the largest humanitarian crisis in the history of the Syrian civil war.

The current de-escalation zone centered on Idlib was established by Turkey and Russia in Sochi to stave off an assault on the last opposition stronghold. The current pattern of ceasefire violations seriously threatens the viability of this settlement due to disagreements over its implementation. The deal originally envisioned halting a planned regime offensive on the area through a Turkish led disarmament of al-Qaeda affiliated Hay’at Tahrir as-Sham (HTS) forces. Opposition forces were also ordered to hand over their heavy weapons such as tanks, howitzers, and other equipment. However, HTS pre-empted this plan by consolidating its position in Idlib—taking nearly complete military control over the de-escalation zone in January 2019.

The pattern of attacks in Idlib, particularly from the Assad regime, targeted communities near the boundaries of the de-escalation zone. Regime forces repeatedly target both urban centers and rural communities that seem to be of little military or strategic value. The regime has continued to bomb smaller towns such as Kafr Zita and al-Latiminah with artillery, and rockets since February 15. Even towns that border Turkish military observation points such as Qalaat al-Mudiq and Morek are being hit hard by regime shelling.

Residents in the targeted rural areas are fleeing because of the threat to their lives from the strikes, but also due to the threat to their livestock. Imagery on social media shows large amounts of sheep and goats have died because of artillery strikes. The deliberate targeting of agricultural communities is worsening an already dire humanitarian crisis in Idlib. Large aid organizations have begun pulling out of Idlib following HTS’s takeover of the area. Aid organizations fear funds being diverted to HTS and held liable for supporting a designated terrorist organization. Nearly two thirds of Idlib’s residents depend on humanitarian aid.

Major population centers in Idlib and northern Hama are experiencing large scale displacement due to the continual shelling and airstrikes. The towns of Maarat al-Numaan, Khan Sheikhoun, and Saraqib are emptying because of continual regime attacks. Medical facilities in these cities are being repeatedly targeted creating difficulties in caring for the victims. Reports also show targeting of schools, bakeries, and first responders. The collapse of basic services and the constant threat of attack are creating unlivable conditions in these communities.

The heavy shelling is causing nearly 40,000 people to be displaced in Idlib every month since January 2019 due to the violence. Many of the displaced have already been forced from their homes multiple times pushing them into squalid IDP camps throughout Idlib. Turkey sealed its border in spring 2016 with Syria and continues to actively shoot refugees seeking shelter from the violence. This leaves Idlib residents critically vulnerable with nowhere to go in the event of an intensified regime offensive.

Syrian armed opposition groups launched limited artillery and rocket attacks on regime-controlled territory typically in response to regime shelling. Armed opposition ceasefire violations have occurred in a diminished capacity relative to the regime due to a reliance on locally produced munitions and rocket launchers. The most prominent rebel violation was a suicide attack on a regime base in Northern Hama on March 3, 2019 by Ansar al-Tawhid that killed upward of twenty-five regime fighters in response to the shelling. This raid started a trend of other suicide attacks targeting regime forces stationed in Northern Hama province.

The regime’s ceasefire violations are an attempt to spoil the de-escalation agreement contrary to the interests of other parties. Regime violations relied mostly on artillery and rockets with limited use of airstrikes. Most of the attacks do not appear to have Russian involvement, hence the lack of aircrafts. Many of the munitions used in the attacks are also not Russian provided. Imagery published on social media shows that cluster munition rockets used in several attacks are of Egyptian origin. The few airstrikes conducted by the regime were carried out by Syrian Airforce fighters—not Russian warplanes.

In February 2019, Russia expressed dissatisfaction with HTS’s growing strength in Idlib and Turkey’s failure to carry out the terms of the deal. Turkey, Russia, and Iran all have interests in preventing a humanitarian catastrophe in Idlib and want to keep the deal alive—if only just. The Assad regime never signed the Sochi agreement that created the de-escalation zone and doesn’t feel bound to disengage in the region. However, regime forces likely cannot carry out an offensive without Russian air support and manpower from Iranian proxy forces.

Russia and Turkey are attempting to preserve the ceasefire through joint military patrols in Idlib in response to the ceasefire violations. Turkey agreed to patrol areas in northern Idlib province in cooperation with the Russian military. Russia also agreed to give Turkey access to the airspace over the deconfliction zone. These efforts led to brief respites in the artillery bombardments throughout Idlib. However, after the first joint patrol on Friday March 8, 2019—regime forces resumed attacks on towns such as Khan Sheikhoun within two days, and the next patrol continues to be delayed.

The ceasefire violations are signs of the frayed alliance between Syria, Russia, Turkey, and Iran due to the competing interests between the parties. The regime is anxious to recapture the last major rebel stronghold and bring an end to major hostilities. However, by continually violating the Sochi agreement, the regime and its partners risk military confrontation with Turkey. Turkey already struggles to provide for the 3.6 million Syrian refugees it currently hosts. The possibility of 800,000 or more refugees fleeing towards Turkey from an offensive in Idlib is not a desirable outcome.

Unfortunately, these events are playing out far from the front pages of major new publications. The recent escalation and use of chemical weapons showcases the level of impunity the Assad regime and its allied partners, Russia and Iran, continue to enjoy while inflicting ongoing damage and destruction in Idlib.

The 2018 Sochi agreement is another example of a collapsed and unviable agreement brokered by Turkey and Russia without any consequences for violators in this untenable situation. The lack of action by the international community highlights how low a priority Syria remains as the attacks see no end in sight.

Trevor Mace is an intern at the Rafik Hariri Center for the Middle East.