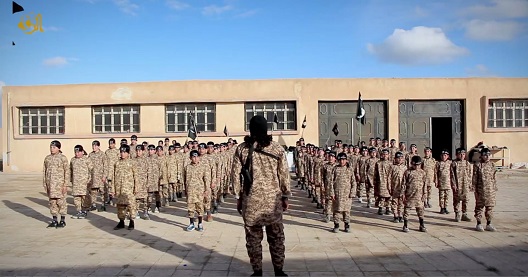 ISIS is recruiting a new wave of combatants into its ranks following the joint forces’ advances into Raqqa province and to assert its control over larger swaths of the northern outskirts of Aleppo. The Syrian Observatory for Human Rights stated that between January and August 2015 1,100 children under the age of sixteen have been recruited by the Islamic State (ISIS). A Syrian Human Rights Committee report states, “Most of them take part in non-killing activities, assisting elder fighters in a logistical manner, such as transferring ammunition, preparing meals, cleaning munitions and machines, whilst others assist with guarding patrols and barriers.”

ISIS has built a complex recruitment operation, in which it exploits the severe food insecurity of local families by offering payment to those who send their children to join its ranks. ISIS typically pays between $250 and $350 per child per month, and thus many families willing send their children to ISIS due to their material needs.

ISIS organizes festivals at mosques and in public squares to brainwash the children in attendance. It boasts about al-Qaeda’s victories in Afghanistan and delivers sermons praising its leaders’ heroism. Using recent events, such as Charlie Hebdo cartoons of Muhammad, it reinforces the concept of takfir (the practice of excommunication, by one Muslim declaring another Muslim an apostate) in the minds of the youth, and inspires them to defend Islam. ISIS tells them that combat is the only honorable path available to them, further galvanizing them with many prizes and financial rewards to lure them in.

ISIS’s media offices use billboards to plaster messages in the city streets it controls, targeting the public, particularly children. They also broadcast video clips of their combat missions and their achievements, their own religious anthems, and lectures on Sharia. These advertisements entice the youth to fight with ISIS, corrupting how they think with the allure of victory and glory.

It is highly innovative in recruiting children, even using video games to that end. It encourages the children to play these games away from the supervision of their parents. The heroic narratives in those games attract the innocent children. In September 2014, ISIS released a short video using footage from Grand Theft Auto, and highlighted the similarities between the missions in the game and ISIS’s terrorism.

ISIS enrolls its child recruits in the “Caliphate Cubs.” Once enrolled, they are introduced to the Sharia Camps, where they study the religious underpinnings of ISIS’s ideology. It indoctrinates the children with ISIS’s version of Islam and trains them to swear fealty to Abu Bakr al-Baghdadi as the Caliph. It also exposes them to recordings of ISIS sermons and combat and terrorist operations to get them ready for the transition to the barracks, where they begin using light weaponry and undergo physical training exercises in preparation for combat missions.

After completing Sharia and combat training, the children are sorted into groups based on their mental and physical capabilities. Those with physical prowess are sent to the fronts for combat and to take part in suicide missions. Another group is responsible for logistical operations such as performing maintenance, conducting patrols, and transporting ammunition. The last group is comprised of children who did not score well on the physical assessment but have strong mental faculties. They become informants who operate among the general public. They are commonly referred to as the “Flash Memory” and report directly to ISIS’s Security Offices with information on local civilians. Through these informants ISIS has built the beginnings of an intelligence state as found under Bashar al-Assad and Saddam Hussein. These children are considered to be the most loyal to the ISIS cause and are capable of betraying anyone to the authorities. This has caused many families to distrust their own children in fear that they may be secretly working for the Security Offices.

The camp located in Tabqa, fifty-five kilometers west of Raqqa, is one of the most important camps for training child combatants. The children spend fifteen days in a Sharia Camp where they study the Quran and other Sharia-based subjects, which ISIS distorts to emphasize the need for combat and the establishment of an Islamic state for Islam to prevail and regain its past glory. The child combatants study martial arts for thirty days and train in light weaponry. Military education is not the sole goal of this camp, it also serves the purpose of isolating the children from their families or any other moderating influence that could dissuade them from adopting the ISIS doctrine, which seeks to strip the children of their humanity and make killing the norm in their eyes.

ISIS also recruits children to carry out suicide missions. In the past three months, ISIS conducted a number of suicide operations in the northern outskirts of Aleppo against opposition forces in an attempt to gain control of the cities of Aazaz, Tal Rafaat, and Marea. Some local sources claim that ISIS used children in 80% of these operations, mainly because of the ease with which they can be brainwashed and transformed into loyal operatives. There’s also an economic element at play. Salaries and expenses for children are much lower than for adults. Recently, ISIS has struggled to recruit young men because of their migration to territory outside their control, forcing ISIS to recruit children. Children are also more disciplined and eager, largely due to their inability to comprehend what is happening to them. This allows them to be easily exploited and convinced to undertake various tasks. This has enabled ISIS to mitigate its losses of adult fighters due to migration and fighting.

These are not the only reasons why ISIS is seeking to recruit children. Before ISIS existed, the Soviets also realized the importance of recruiting children. A quote attributed to the Education Workers Congress of the Communist Party says, “We must turn children, who can be shaped like wax, into real, good Communists. We must remove the children from the crude influence of their families. We must take them over and, to speak frankly, nationalize them.”

ISIS recently decided to reopen grammar schools in Raqqa that teach curricula designed by ISIS. Local families fear these schools will be used to brainwash and recruit their children. ISIS issued a decree in October of this year that requires all children ages fourteen and older from the countryside north of Raqqa to record their names in the ISIS Islamic Police registries. This is a preliminary step to drafting them for the imminent battle against the joint forces which are advancing from the north. If the international forces unite and seriously push for the extermination of ISIS in the near future, ISIS’s impact on the region and the world will persist for many years to come through the Caliphate Cubs. Those with decision-making powers must not only deal with ISIS, but also with what ISIS leaves in its wake.

Feras Hanoush is an activist from Raqqa and a former doctor with Médecins Sans Frontières in Syria.

Image: (Photo: A still of an ISIS video called "Al-Farouq Institute for Cubs".)