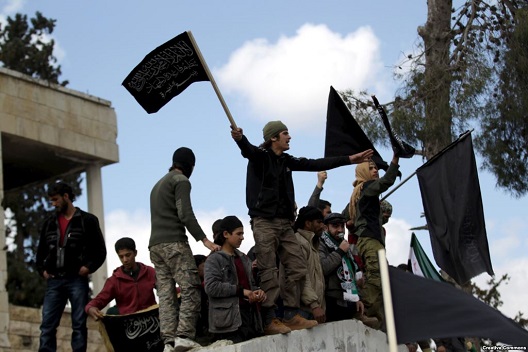 The judiciary system in Idlib is akin to jungle law, in which the powerful use it to impose their rule on the others. Examining the judicial system shows how the role of the military factions use the judiciary to encroach on civilian affairs. Some traditional Islamic concepts like Sharia and ijtihad (freedom for judges to make new rulings not based on precedence) are exploited to eliminate armed groups’ enemies and reinforce the control of militants and their associates.

Idlib came out of Assad’s control gradually between 2012 and 2015. Since when the opposition first started to control territory, the population in the province has dealt with courts that do not differ much from the Assad regime’s courts, particularly from corruption in form of nepotism, bribery, and arbitrary rule.

Two major types of courts exist in Idlib. Both derive their verdicts from unfixed Sharia law or Sharia ghayr muqannana, meaning it is not codified or written with an explanation of the principles, documents, laws, and specific articles off which it is based. Each verdict depends on the judge’s judgement (ijtihad), resulting in variation and contradiction in the verdicts from case to case.

The first type of court is those internal to each faction. For example, Jabhat Fateh al-Sham (previously the Nusra Front), and Ahrar al-Sham, both have their own courts throughout Idlib province. These courts adhere to directives from its faction’s legal office, and its judges are members of these factions. Such courts are concerned with solving problems and cases amongst members of the armed group. Being internal to the group, it lacks independence from the armed group’s leadership and fighters. Some civilians resort to these courts to solve their cases. It is common to see a judge who is not a legal expert and used to work as a tailor or construction worker a few years ago.

The second type of court is more general and is known joint courts, such as the Sharia committee (al-hay’a al-Shar’iyya) in Binnish and its twelve subordinate courts. Their judicial staff include judges, counselors, and jurists of various political orientations and ideologies. These courts deal with a range of cases, whether between disputing armed factions or civil cases. It differs from the first type of court in that people have the chance to appeal some verdicts, in which situation the case is sent back to the main court in Binnish for review and possibly changing the verdict.

In practice, the two types do not differ much because residents chose what kind of courts they use depending on how inline their ideas and beliefs are with the court’s ideology. The most important deciding factor is whether the litigant has a relation with one of the judges, to ensure the end judgement being in his favor even before submitting the complaint. The law becomes only applicable on the socially weak who have no relations with judges in courts or militants belonging to a prominent faction. Influential people in liberated regions such as battalion commanders, their relatives, and those with connections to them, undermine these courts and its verdicts. Moreover, they employ these courts to find a legal pretext for their illegal acts. In this way, the legal circumstances have not changed since the regime was in power, except that now regime planes bomb both sides, indiscriminately killing both detainees and those who arrested them.

Both types of courts rejected an activist initiative in the province to use the Unified Arab Law as a judicial basis in Idlib, which is used in Aleppo’s opposition controlled courts. The initiative failed because it was unable to convince influential jurists in Idlib.

The trial process suffers from a number of problems. Absence of a clear, written law becomes an excuse for an attorney who fails to defend a litigant, and afterwards many defendants feel they have been wrongfully treated. Judges are often not legal experts. It is common to find two different verdicts in two identical cases coming because the courts do not adhere to a fixed set of trial rules and principles, and many of these verdicts cannot be impeached. Military leaders directly interfere in cases according to their interests and aims.

Bringing the two court types under a single structure is impossible under the current conditions, despite how similar they are to one another. The main reason because of fighting between judges over religious ideology and jurisprudence, although all of them are pro-salafism. Nevertheless, they accuse each other of having errors in their doctrine and application of the law, especially if one of them was a supporter of Sufism at some point in his life. The regular fighting over ideology has created a lack of trust between the two sides.

These courts work with security bodies that terrify local residents. The security forces vary by location; for instance, in Jabal al-Zawiya ther is al-Iiqab, and in Jisr al-Shugur there is Balluuta, both which are part of Jabhat Fateh al-Sham. These groups are totally free to arrest, kidnap, or even assassinate people in areas they are responsible for. Fateh al-Sham’s commanders justify the existence of such groups as being necessary to ensure people’s security. However, the fact that armed groups have civilian-focused security forces shows how the military groups are imposing on the civilian sphere.

When security forces arrest a person, they drive him to secret prisons, where former detainees say they are interrogated under physical and psychological torture. When locals hear that al-‘Iqab has arrested someone in Jabal al-Zawiya, they consider the detainee to have already died dead. Ironically, members of Fateh al-Sham use these groups to settle scores and solve personal problems because they do not have confidence in judiciary bodies founded by their own leaders.

Security forces have arrested many leaders of the Free Syrian Army (FSA) and civil society activists under charges of espionage and apostasy. Locals say that the arrested are sentenced for a certain period, or fined with a huge amount of money which can reach $500,000. Such was the case with Abdulla al-Kholi, the commander of Harakat Hazm, a FSA group that the Nusra Front crushed in early 2015. Prisoners who are found innocent are obliged to pay money for lodging and food they received during their detention. There are many documented cases of prisoners dying under torture. In other cases, prisoners are released after paying bribes to jailers, as happened with four leaders from Jabhat Thuwwar Suriya.

The current judicial situation in Idlib is itself worrisome, but the underlying problems are more dangerous. The law has turned into a weapon to settle scores, imposing the rule of military factions, and undermine civil institutions. The situation under Bashar al-Assad’s reign was not much better, the only difference is that extremist groups rely, at least theoretically, on Islam and Shari’a law to justify their arbitrary rule. These groups will continue targeting activists who seek a stable and effective local governance system, along with civilians who defy these groups’ rule, exactly like what the Assad regime did and still does.

Tirwada Abd al-Haqq is a civil activist residing in Idlib.