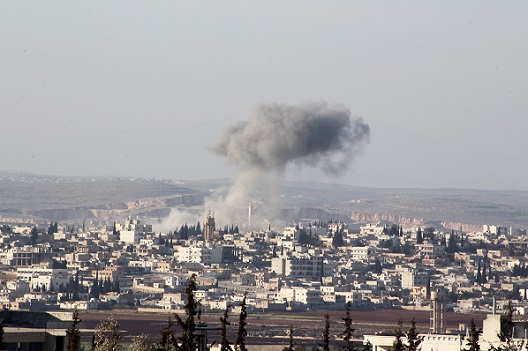 In a serious blow to the rebellion, the Syrian regime has severed the main insurgent supply line from Turkey to long-contested Aleppo, Syria’s second city. This is the culmination of several tactical regime victories against the opposition in recent weeks, largely due to Russian air support. Although some Western policy-makers (and many opposition supporters) continue to insist that Russia and its allies are sinking into a quagmire in Syria, the facts on the ground indicate that it is the insurgency and its backers who are stuck in a morass. In contrast with its position deteriorating as recently as five months ago, the regime is now well-placed to divide, isolate, and advance on the armed opposition in several key geographies.

In the last two days, the regime secured access to several towns north of Aleppo city, most prominently Nubl and Zahraa, succeeding in a few days in what it had failed to do for over three years. The regime could not have done this without support from Russia, which conducted more than 270 air raids on the areas north of Aleppo city on Monday and Tuesday of this week alone. By taking these towns, the regime has isolated Aleppo city from its northern countryside and cut all remaining supply lines to the city (it already controlled the city’s southern approaches), leaving only a three kilometer stretch of land that is still contested. If the regime opts to retake the city now, it will use its proven tactics of siege coupled with aerial and artillery bombardment, trapping and starving the inhabitants, and forcing them to surrender. Knowing this, thousands of civilians fled Aleppo as the regime cut the city off.

The regime and its allies had already been on a winning streak. In previous weeks, using cluster munitions and volumetric weapons, regime and Russian forces forced the opposition forces out of the key province of Latakia, retaking the last remaining opposition city Salma. Rather than advance on nearby Idlib and Hama, however, the regime made a strategic decision to concentrate on Aleppo further east. By separating the northern Aleppo countryside from Aleppo city, the regime has effectively cut access by the city’s insurgents to Bab al-Salama, their key supply line from Turkey. It now has the option to advance on rebel-held areas of Aleppo city.

Retaking Aleppo city would be a substantial win for the regime. Militarily, it would cut off opposition forces south of the city. It would also allow the regime to further isolate opposition forces in nearby Idlib and Hama. Rebel forces in northwestern Syria receive supplies from Turkey through two border crossings: Bab al-Salama in Aleppo province and Bab al-Hawa in Idlib province. If the regime takes Aleppo city, it could then target supply lines between Idlib- and Hama-based insurgents and Turkey. The regime may opt not to take Aleppo now, however, preferring to bomb and besiege it instead. That would simply freeze the Aleppo city frontlines and allow Assad and his allies to deploy fighters and resources elsewhere, including in Idlib and Hama. Regardless, the regime’s strategy will be isolating the opposition into manageable pockets and dealing with each individually.

Crucially, progress in Aleppo will free up resources against the Islamic State (ISIS). It is true that Assad and his allies have always prioritized fighting the insurgency over ISIS. The changing international environment, however, allows for a more sophisticated regime strategy. Despite frequent accusations, the regime and ISIS are not really allies. The regime simply sees the entire conflict through the prism of ensuring its own survival by any means necessary. Throughout the war, this has meant ignoring ISIS or facilitating its war against the rebels. Now, however, the regime would benefit enormously at the international level by clearing the Aleppo area of insurgents and ISIS alike (or following the Aleppo victory with some anti-ISIS wins elsewhere, such as Palmyra). That would demonstrate to the world that it must choose between Assad and ISIS, and that ISIS and the various insurgent groups are one and the same enemy. Considering the West’s singular focus on ISIS and tolerance of the regime, this would actually be a sound strategy.

Of course, the developments in Aleppo are happening amid a UN-sponsored diplomatic process involving the regime and the opposition. The talks are characterized by mistrust, confusion, and a bit of absurdity. The opposition insists that the other side implement UN resolutions calling for an end to targeting civilians, though as Aleppo shows the war is headed in precisely the opposite direction. Most obviously, given the shifting military balance, it is unclear why the regime would agree to any of these demands, still less make meaningful political concessions. It is even less clear how the opposition and its backers can compel it to do so. Staffan de Mistura, in a move acknowledging the futility of the talks when the regime and Russia refuse to stop bombing the opposition and civilians, today halted the attempts to conduct negotiations.

The opposition is aware of the danger the Aleppo defeat poses. Rebel forces in Aleppo have issued a statement calling on all opposition forces to send fighters and supplies to Aleppo, adding that they are fighting on two fronts: against both the regime and ISIS. Although rebels from Idlib and Hama have responded to the call, it is unlikely to significantly slow down the regime and Russia. Simply, opposition forces do not have an anti-aircraft capability. The United States and its allies will neither provide it nor impose direct costs on regime and Russian forces for aerial bombing, sieges, and other key regime tactics. As of now, with regime forces closing in on Aleppo city, the insurgency simply has no answer to the combination of determined enemies and incompetent or disinterested allies.

Faysal Itani is a Resident Fellow with the Atlantic Council’s Rafik Hariri Center for the Middle East. Hossam Abouzahr is the editor of SyriaSource.