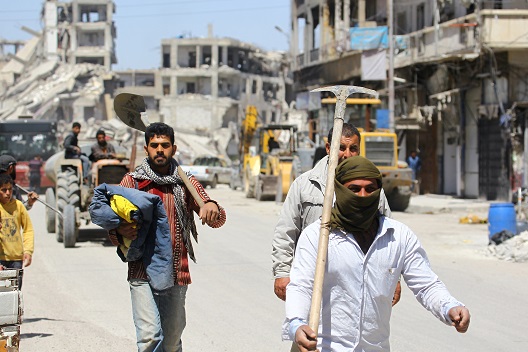 Amran lives in Raqqa. He travels more than 30 miles twice a month to get his diabetes medication from a pharmacy in Ain Issa, north of the city of Raqqa. He also travels west to the city of Tabqa another 25 miles to get treatment for his family. Imran is forced to travel each time this far because there are no pharmacies in Raqqa offering these medications for free and he can’t afford to pay for them. He’s not alone; he is usually accompanied by neighbors on his trips needing to secure medication for chronic diseases and other illnesses.

In recent weeks, medical officials report the spread of gastrointestinal diseases such as infections, diarrhea, and hepatitis due to the consumption of contaminated water. Chlorine used in water purification is not available in large quantities in Raqqa.

Imran says ISIS left behind a city troubled “in every meaning of the word.” In June 2014, ISIS called for the establishment of a caliphate in Syria and Iraq, and used the city of Raqqa as its capital. The group held the city in its grip for years, carrying out executions and punishments under the pretext of applying Sharia law. Many residents fled over the years due to the abuse and the ongoing siege with 8,000 remaining from over 600,000 original residents, according to estimates by the Raqqa Civil Council. The Syrian Democratic Forces (SDF) and the international coalition to defeat ISIS, drove out the Islamic State in October of 2017. Estimates of the destruction of the city is between 70-80 percent. After the liberation of Raqqa, nearly 100,000 civilians returned to the devastated city.

Osman Ahmed, a 23-year-old resident of Raqqa, says the medical situation is “not good.” The tiny 8,000 population boomed overnight as over 100,000 residents returned but without the services to accommodate them. “The city needs additional medical facilities and hospitals to meet their needs. A month ago [March 2018], there was only one medical center in the city and it is constantly overcrowded,” he said.

Firas al-Fahd, the health administrator of the Raqqa Civil Council, blames international organizations for the lack and limited capacity of the medical facilities in Raqqa. He also says the US-led coalition against ISIS did not contribute to health services in the city.

All surgery and intensive care cases are being transferred to the cities of Tal Abyad and Kobani on the border with Turkey. Patients from Raqqa travel anywhere from 50 miles to 72 miles to reach these hospitals—patient have died before they reach their destinations due to both medical complications arising during rough travel conditions or because of mines left behind by ISIS. The exact number of deaths are unavailable.

Two private new hospitals just opened their doors in the past few weeks, founded by doctors that remained in the city, and these hospitals are helping address part of this problem. Fahd says this has been a positive development.

Across the city today, there are two private hospitals and one public clinic. The hospitals charge for treatment among a population that is unable to afford medical services. Due to Raqqa’s dire economic situation, it places the majority of the population “below the poverty line,” Fahd says. The city’s residents, emerging from years of siege and poverty under ISIS, are trying to rebuild their destroyed homes, and can’t afford to pay for medical treatment at the new private hospitals.

The public clinic operates free of charge with support from Doctors Without Borders (MSF). It includes a women’s clinic, as well as internal medicine, dermatology, and pediatric wards. Due to a lack of provisions, however, the hospital can only perform minor surgical procedures. Fahd says it operates more like an emergency clinic. He said that the Raqqa Civil Council asked MSF to expand its scope to accommodate the many conditions in the city, and MSF told the council it will open another clinic in the northeastern side of the city.

An unnamed source from the Raqqa Civil Council’s medical office not authorized to speak publicly on the matter, acknowledged the many promises by MSF to improve the medical situation by building new hospitals and clinics, but that “ promises remain unfulfilled.” He added that MSF’s free hospital is always “overwhelmed,” and cannot receive patients around the clock due to overcrowding. The situation forces some patients to wait hours and sometimes days to receive treatment.

The city also has one general hospital—located in the Mashbal district, south east of the city—while there are no hospitals in the center and west of the city. The large number of mines scattered throughout the city inhibits civilian movements for treatment.

Fahd said other international humanitarian organizations are looking into the possibility of rehabilitating Raqqa’s destroyed maternity hospital, and turning it into a clinic to serve the city.

Several organizations visited hospitals that were destroyed, including the National Hospital that ISIS had occupied. Two MSF delegations visited the hospital to potentially rebuild, but Fahd says an Italian organization instead plans to open a clinic in one of the hospital wards. Fahd adds that moving forward, there are plans to also rehabilitate the rest of the National hospital.

Fahd says’ the international coalition’s commitment to restore stability in Raqqa can only be achieved if the city has access to decent healthcare. “Unfortunately, we are below the poverty level, which is why we asking to keep the promises they made to the Raqqa Civil Council to provide healthcare and medical assistance to residents.”

Fahd estimates at least 50 percent of Raqqa’s residents—around 300,000—to return this summer. With the city now housing close to 140,000 people, the expected increase necessitates an urgent plan to establish new medical facilities and rehabilitate existing ones to accommodate the city’s medical needs. Otherwise, Raqqa will witness a new humanitarian disaster, adding to the problems of the city that residents are already facing after returning to the devastation of their homes.

Maher Al-Hamdan is a Syrian citizen journalist. He has worked with several international and rights organizations.