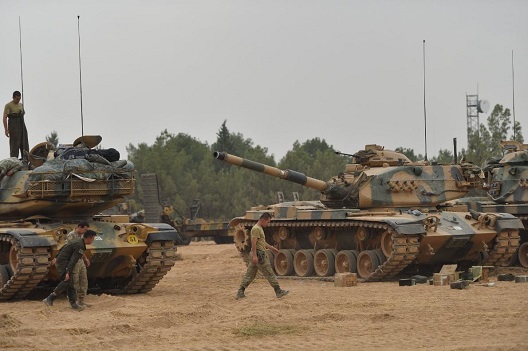 It has been a busy week for Syria’s Kurds. After engaging in a fierce battle with forces loyal to Bashar al Assad in the northeastern town of Hasaka, they removed all but a few vestiges of Assad support in the area to leave Kurdish rule largely assured.

This elation was tempered by news that further to the West, Turkey and its militia allies in Syria had launched an offensive on the Islamic State (ISIS) held town of Jarablus, a town on the west bank of the Euphrates river that the Kurds had been eyeing for some time as the next conquest on their way to solidifying their military and political control. Statements from senior Kurdish politicians of the Democratic Union Party (PYD) responded stridently, calling the Turkish move a “declaration of war,” and warning that the Turks were entering a “quagmire” if they continued to operate inside Syria.

These remarks appear to be about appearing strong rather than thinking strategically. The truth is that for the last two years this moment was coming, the Turks have talked constantly about executing this operation, and intermittent planning with the United States has taken place for up to a year. The dream of the Kurds is to unite their lands across northern Syria, from Hasaka in the northeast to Afrin in the northwest, erasing the shame of the Ba’ath party’s Arabization policies which disenfranchised Kurds and diluted their language and culture.

Turkey is in the midst of fighting a 32 year long war against the Kurdistan Workers Party (PKK), and opposes the PKK sister movement the PYD building a proto-state on its southern flank in Syria. Accordingly, the dreams of Syria’s Kurds have proven anathema to Turkish strategic priorities in the region. The United States, intent on finding reliable ground forces that could be trusted to allow for the embedding of special forces with to help defeat ISIS, caused deep resentment and anger in Ankara when it chose the Syrian Kurds as their main military allies. But little by little and with no small amount of help from western firepower and a few Russian supplied armaments, the Kurds have carved out the region that Turkey is working to prevent.

This support from external powers is both the PYD’s strength and weakness. It enabled them to build their proto-state in the area known in Kurdish as Rojava, but it has so inflamed their neighbors that without continued external backing it is questionable to what extent that Rojava can survive. In all four nations in which the Kurds live, they have historically been at the mercy of larger forces outside of their control. Two attempts at Kurdish statehood, the Kingdom of Kurdistan in Iraq (1922-1924), and the Mahabad republic in Iran (1946) met their demise when Britain and Russia respectively decided that there was no merit to supporting the establishment of a recognized Kurdish political entity. In 2016 the situation in Kurdish-controlled territories in Syria is not that different, with a long, exposed front line and offensives heavily dependent on coalition airpower to sustain.

The PYD’s current statements, hardline as they are, do not take away from the fact that the movement might have overreached itself. The Syrian Democratic Forces (SDF), of which the Kurdish YPG is the major component, pushed across the Tishrin Dam in December 2015, before moving into ISIS held Manbij in August this year. These steps were necessary to dislodge ISIS from the area and break the spine of its logistical supply routes to Raqqa. Nevertheless, the desire to unite the Kurdish regions across northern Syria with Afrin was too much for the Kurds to resist. Within a week of moving to Manbij the YPG and SDF already began pushing further West into the area south of the Turkish border around Manbij, known as the Manbij pocket, towards the town al Bab, just a few kilometers north of Aleppo.

It was this move that triggered Turkey and its Syrian militia allies’ deployment into Jarablus, although the planning for such an intervention dates back to at least June 2015. The planning appears framed around Turkey’s fear of the PYD consolidating its power in Jarablus and further southwest in Manbij and advancing west towards Afrin. With a small operation to clear ISIS from Jarablus, Turkey is achieving two interconnected goals: The removal of one threat, ISIS, from the border, while a second threat, the YPG, is prevented from further territorial expansion.

The United States has been working with Turkey to assuage concerns about a long term YPG presence in Manbij. For this reason, the United States pledged to leave an Arab holding force in the city, which won US war planners Turkish quiescence. It also explains why, during the recent meeting in Ankara, Vice President Biden made it absolutely clear that Kurdish forces could no longer expect US support if they operated West of the Euphrates river. The dream of a unified Kurdish region in Syria appears to be over.

The PYD have not been so brash as to assume they could break away from the rest of Syria while their position remains so precarious. Unlike their Kurdish brothers in Iraq the movement never once claimed that it wanted to form a state. But with the movement to unite the northern territories halted, the important question is what the PYD might accept in the long run, both in terms of political arrangements inside Syria, and the territorial extent of their rule.

Given how easily the Kurds defeated Assad in Hasaka this week, it seems likely that the PYD will try to fully cement its control in the area, and further increase its grip on the de-facto capital of Rojava, Qamishli, while leaving the regime with just a small presence on the ground. It is unlikely that the PYD will ever compromise on its gains in this region, it is simply too central to the Kurdish political project to be abandoned and would not be given up without a fight. However, it would be a battle too costly even for Turkey to consider entering into.

But to the West of the Kurdish controlled regions things look different. Should ISIS be defeated in the area then it would open up space for a whole range of conflicts that remain secondary to the problems of defeating Assad and ISIS at present. The Kurdish military position in its western regions and in Afrin are not strong enough to survive a joint onslaught from the increasing numbers of enemies they face. Currently the Kurds have poor relations with the Free Syrian Army, increasingly worsening relations with the Syrian regime, and are in a state of outright war with Islamist factions and ISIS. Surrounded by hostile parties, building some alliances outside of the range of small Arab groups in the SDF will be needed if the Kurds are to keep hold of what they have.

The other option of course would be to call for the help of the Kurdistan Regional Government in Erbil, but relations between the PYD and the ruling Kurdistan Democratic Party (KDP) are also extremely poor. If a Kurdish controlled entity is what the PYD is aiming for, then it is likely that the only support it will get in the region will be from other Kurds. Ultimately the PYD needs to do something to heal the rift with the KDP to get at least some form of outside assistance.

The PYD cannot face its current predicament in isolation. The project for Rojava is not at risk of being over, but if the PYD does not begin to recalculate its regional and security policies, then it could risk losing much of its gains over the past two years. Having a serious conversation with its US backers to ascertain red lines is the first step. The second step would be to go and make some friends in the neighborhood, or else things could get a lot worse in the near future.