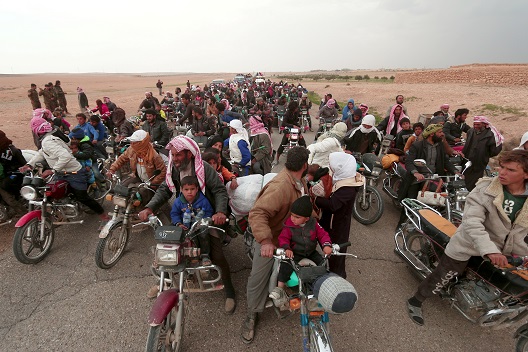 The Kurdish-led Syrian Democratic Forces (SDF), backed by the US-led coalition, has succeeded in encircling Raqqa, the de facto capital of the Islamic State (ISIS, ISIL, Daesh) in Syria. By capturing the surrounding villages and access routes to isolate the city, this strategy has contributed to weakening ISIS yet is unlikely to lead to a swift victory. Nonetheless, the heavy cost of capturing the city seems to be a secondary concern for analysts and policy makers working on Syria. Securing and governing the Arab majority city of Raqqa post-ISIS appears to be the main concern for analysts. The SDF does not seem to share the same anxiety; its plan for Raqqa is in motion despite all warnings about the negative ramifications that may be caused by it.

The SDF announced on April 18 the formation of a civilian council to administer Syria’s Raqqa region once ISIS is pushed out. The declaration followed a preparatory meeting attended by delegates including representatives from Arabs, Kurds, and Turkmen. The majority of the council consists of Arabs, in line with Raqqa’s demography, but also includes Kurds, and other ethnic groups. The SDF elected two co-chairs, one Kurdish and one Arab, and established fourteen committees. According to Kurdish officials, the council is made up of people originally from Raqqa province, but fled to Kurdish-controlled areas.

The SDF plan includes expanding the council once Raqqa is completely captured in order to better represent the ethnic and tribal communities in the city. A military council is expected to form later to protect and run the city in coordination with the civil council. This plan is already in motion as SDF officials already started handing over to the Raqqa council the responsibility of running the villages and towns freed from ISIS. The SDF and US-led coalition trained hundreds of people north of Raqqa to join the Raqqa police. A senior Kurdish politician Ilham Ahmed told Reuters that the preparations for the council to manage the city are almost complete.

The SDF governance model for Raqqa mirrors the governing arrangements put in place in the city of Manbij after its capture by the SDF in August 2016.  The Manbij civilian and military councils are now in charge of the city’s administration and the rural countryside. But according to a recent report by the International Crisis group (ICG), the SDF efforts to include Arabs in the Kurdish-led “Democratic Self-Administration” model have been superficial and do not amount to a meaningful share in governance. “Arab figures willing to participate in the Self-Administration are handed impressive titles but no real authority. Local governance bodies function as channels to convey complaints and petitions rather than as platforms for effective participation, while the ultimate power of decision rests with the Qandil-trained PKK cadres.”

The SDF sponsored model for Raqqa aims to ensure their control over the territories they capture from ISIS as a first step to integrating it in the Self-Administration project. The co-chair of the ruling Syrian Kurdish Democratic Union Party (PYD) stated in March that Raqqa could become part of the Kurdish-led democratic federal system. “We expect [this] because our project is for all Syria…and Raqqa can be part of it,” he then added that “the people of Raqqa are the ones who take the decision on everything.”

A similar conversation came up in a meeting with a senior Kurdish politician whom I met under the Chatham House rule, which prevents me from revealing his identity or affiliation. The official clearly hinted that the SDF plan to include both Manbij and Raqqa in the Kurdish-led federal government in northern Syria that was adopted in March 2016. But he avoided giving a clear answer about their response if the people of Raqqa and Manbij refuse to join the Self-Administration model.

The implementation of the SDF plan is unlikely to foster meaningful local participation in governing Raqqa, which will increase tension and may lead to confrontations. According to the aforementioned ICG report, the Self-Administration model becomes fragile outside majority-Kurdish areas. “If the YPG and its allies do indeed capture Raqqa, stabilizing and controlling it with the organization’s current model could backfire, enabling the post-ISIS re-emergence of a jihadist insurgency (and accompanying racketeering networks) in asymmetric form – the very method that allowed the organization’s predecessor (al-Qaeda in Iraq) to survive and rebound from apparent defeat ten years ago.” In other words, ISIS will attempt to exploit the SDF’s reputation as a Kurd-dominated force to recruit and mobilize locals to fight against them.

A recent study by The Washington Institute for Near East Policy showed that all four major tribes of Raqqa are hostile to the Kurdish YPG and skeptical of the SDF which is likely to hinder the implementation of the SDF model in Raqqa. The study mentions locals’ concerns about a Kurdish territorial expansion at the expense of Arab tribes, mandatory conscription, arbitrary arrests, and retribution for associating with ISIS.

The expanded Kurdish influence in the future running of the city is also sensitive for Turkey, which has fought its own Kurdish insurgency for three decades and fears growing Kurdish ascendancy just over the border in northern Syria. As a result, more extensive Turkish action against the SDF in Syria is possible, especially if tensions soar further.

Post-ISIS governance in Raqqa could only be successful if it allows locals to meaningfully develop and run their city separately from the YPG-PYD’s Self-Administration and reflect the city’s social composition. Doing so could also assure Turkey and other skeptical Syrians that the SDF’s capture of territory no longer means the arrival of single-party rule.

Haid Haid is a Syrian columnist, researcher, and associate fellow at Chatham House focused on security policy, conflict studies, and Kurdish and Islamist movements. Follow him on Twitter at @HaidHaid22.