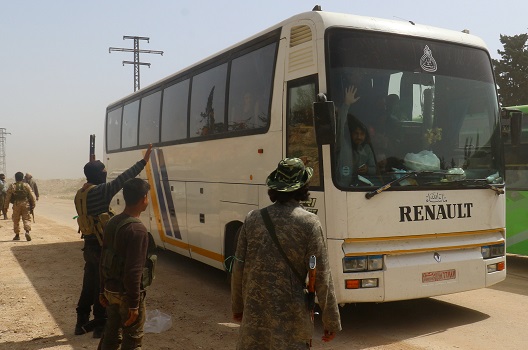 Photo: Rebel fighters welcome a convoy of buses carrying Sunni rebels and civilians, who were evacuated from Zabadani and Madaya, as part of a reciprocal evacuation deal for four besieged towns, upon their arrival at al-Rashideen to travel later towards rebel-held Idlib, Syria April 21, 2017. REUTERS/Ammar Abdullah

The past two years have seen a series of truces between the Syrian regime and rebel groups. Such deals, labelled by the regime as “national reconciliation” agreements, lead the two sides to compromises that extract them from existential battles of attrition. To persist, they require all sides to enter in good faith and abandon the principles of victory and loss, in order to overcome the remnants of the past that led to the conflict in the first place.

The phrase “national reconciliation” is used to describe a return to life under Assad’s murderous regime. The deals are generally imposed through the bombing and siege of residential areas and starvation of their inhabitants. The essential condition for reconciliation has been ignored—namely, the idea of transitional justice, an approach that achieves justice during the transitional phase at the end of a conflict, through commissions of enquiry, redress and reparation, thus avoiding a return to conflict, as in the case of the reconciliations in South Africa and Latin America.

In the Syrian case, the Assad regime sees itself as embodying the Syrian state, takes the arrogant view that “the state does not reconcile,” commits vast numbers of war crimes that have killed an estimated half million victims with no regulatory framework or laws to guarantee justice or accountability. The regime does not see itself as a party to a national conflict, but rather that it is simply exercising its powers as a sovereign state against illegal groups. All this has contributed to making the reconciliation deals into farcical shows of forced settlement carried out by the regime and its allied militias, and with support from Russian and Iranian forces.

While the reconciliation deals appear to be a way for the regime to retake lost territory, there are more dangerous implications for Syria and the Middle East, already ravaged by sectarian strife. Such deals could become an internationally-accepted prototype and a way in which the Syrian conflict is ended, wiping the Assad regime clean of Syrian blood and absolving it of crushing popular dissent. The deals involve a destructive change to Syrian society, through “reconciliation evacuations” in which residents leave areas entirely, mostly heading for northern Syria. These have taken place in many places such as Homs, the Damascus region and the Aleppo countryside. They are a deliberate tactic used by the regime and its supporters to strengthen their control of “useful Syria”, in the phrase coined by Syrian President Bashar al-Assad. These deals have been portrayed as “gifts” from the regime to people living in the areas covered, who have had their status “normalized,” laying the way for their sons to be forcibly conscripted into the regime army.

Russia, through its base on the Syrian coast, overseas these reconciliations, provides the air support necessary to force opposition areas to submit to the regime, and provides Russian mediators to help negotiate the deals and act as guarantors. The reconciliations strengthen Russia’s ground presence and allow Russia to present itself as progressing toward peace in Syria. Through the reconciliations, Russia has been able to stand by its requirement that Bashar al-Assad not step down. With the elimination of the remaining pockets of moderate opposition forces, Russia can make the claim that the regime is only fighting jihadists true, and twist America’s arm into accepting Assad and even working with him to fight extremist groups.

The Jaroud Arsal area on the Syrian-Lebanese border is the latest area to be the target of such a deal. Following a six day battle with Hezbollah, the agreement led to the evacuation of eight thousand Jabhat al-Nusra fighters and their families along with civilians from the area to Idlib in northern Syria. Prior to that, Madaya and Zabadani in the Damascus region were emptied of their inhabitants. Shia civilians from Kafraya and Foua in northern Syria were moved to regime-controlled areas in what was known as the Four Towns Deal. The regime taking full control of Aleppo last December played a major role in drawing the borders on Assad’s “useful Syria.”

Reconciliation deals are being directly supervised by the Iranian Revolutionary Guard, which is trying to connect geographical areas stretching from the borders of Afghanistan to the Mediterranean. It has largely succeeded in taking control of Iraq through its local proxies, the Shia militias forming the Popular Mobilization Forces (PMF), although the Iraq government remain dependent on US support and unwilling to ask its Western partner to leave. It has also sent its militias to fight alongside the regime in Syria as well as nurturing Hezbollah in Lebanon, which has developed advanced rocket capabilities. Iran has supported the Houthis in Yemen against the Arab coalition and stood alongside the Shia opposition in Bahrain, making Saudi Arabia’s Eastern Province its next target and the final piece of the crescent.

Today, unless the United States and the NATO alliance stands up to Iranian expansionism and its attempts to join up these areas, the world will face an Iranian state that has won major political gains, taken control of vast geographical areas rich in oil, as well as a key commercial sea route. Its latest steps to influence the region can be seen in the reconciliation deals in Syria and its efforts to undermine a solution in Yemen. Given the current lack of will to fight Iran militarily, the best solution would be to cut off its arms outside its territory by making use of the Free Syrian Army in southern Syria, and finding a truly just form of peace instead of these so called reconciliation deals that have allowed for pro-regime militias to take control of large parts Syria.

However, the Trump administration policy, or lack thereof, seems unlikely to take any concrete action. Trump’s focus has been on fighting the Islamic State (with no clear reconstruction strategy for areas liberated from ISIS) and achieving some kind of peace to show that he can end the war. If the war, ends, though, it will not be because of any action taken by Trump, whose Syria policy has been characterized by abrupt actions with no follow up, such as the bombing of Shayrat airbase on April 2017. Instead, it will be because the regime and its allies have found their military solution to Syria.