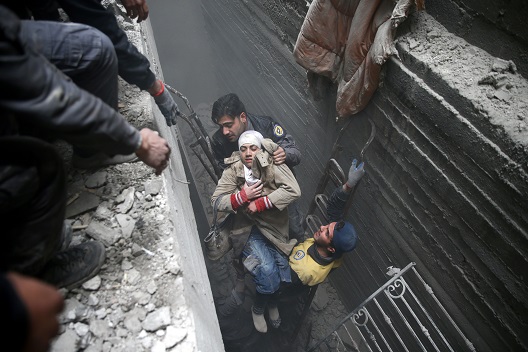 As of March 22, 2018, the Syrian Civil Defense (or White Helmets) lost ten of its members in the Damascus countryside during Syrian President Bashar al-Assad’s recent campaign on Eastern Ghouta. According to Siraj Mahmoud, the official spokesman for the Civil Defense, ten volunteers were killed in Eastern Ghouta, including Mohammed Qasim Masarwa, one of the founders of the civil defense in Ghouta, and twenty-five others were injured, in what has become the biggest challenge facing the White Helmets since the outbreak of the Syrian revolution.

Mahmoud added that most of the Civil Defense centers and equipment in Eastern Ghouta went offline as a result of the Syrian regime’s bombardment with various types of weapons. Making matters worse, city infrastructure suffered severe damage and volunteers had difficulty accessing bombed out areas as a result of road closures and direct targeting of their teams.

The Syrian Civil Defense’s work in Eastern Ghouta face two main challenges: the first regarding the difficulties of evacuating the injured and removing them from the rubble; the second regarding their personal safety in one of the most violent campaigns on Eastern Ghouta.

“The impact of the regime’s recent bombardment of Eastern Ghouta is indescribable,” said Abu Fahad Amer, a field officer of the Civil Defense in Eastern Ghouta. “The regime and its allies use high-explosive rockets, vacuum (or thermobaric) and earthquake (or seismic) bombs, causing the destruction of entire buildings and increasing the difficulty of saving civilians buried alive under the rubble.”

“In targeting Ghouta with ordinary rockets, the civil defense team rushes to the site of the shelling, delivering the wounded to the nearest medical point,” Amer added. “In the case of high-explosive and seismic bomb attacks, which Ghouta has recently faced, the rescue operation may take six or seven hours and the possibility of saving civilian lives is diminished.”

The use of indiscriminate weapons also increases the risk of injury to rescue teams. Amer described an incident in which during the evacuation of the wounded from a town in Eastern Ghouta, the site was shelled by unguided bombs in addition to three other bombings of the same place, wounding two Civil Defense volunteers.

Civil Defense teams in Eastern Ghouta bear the burden of meeting needs greater than their capacity and the equipment available in the nearly five-year besieged area. “The lack of equipment is inevitable; we suffer from severe shortages, Ghouta is besieged, and we do not have enough for the size of the operations we are carrying out,” according to Amer.

“The lack of heavy equipment—such as bobcats and cranes—makes us use hand tools like small jackhammers. In the last ten days [March 11-22], the work of the civil defense has decreased by 70 percent due to the heavy shelling and systematic targeting of vital centers, roads, and hospitals.”

In practice, the lack of equipment means the loss of more lives. Rescuing the injured from the rubble in a period not exceeding half an hour while the victim is still alive, rather than three hours after he or she has died, makes all the difference.

Firas al-Kahhal, a spokesman for the Civil Defense in the Douma sector, said, “The siege imposed on Eastern Ghouta deprives us of the equipment used by the Civil Defense teams outside Ghouta, both in terms of capacity and safety.”

“We cannot repair existing equipment if they fall into disrepair because spare parts are not available. This makes us suffer from a severe shortage of equipment over time. Compensating for this deficit in human resources increases the risk of injury,” he added.

Local and international media focus on the Civil Defense’s achievements in Syria and on the challenges facing its cadres, but their personal circumstances and private lives were somewhat removed. Each member of the Civil Defense has dozens of stories that demonstrate their own personal suffering, according to a number of Civil Defense volunteers.

In this context, Amer described how the Assad regime attacked the town of Misraba in Eastern Ghouta with five air strikes, loaded with seismic bombs on January 3, 2018. On that day, twenty civilians were killed and eighty-five wounded, including sixteen from Amer’s own family.

“When I arrived at the bombing site I was surprised that the building in which my family lives was completely destroyed. I tried to treat the injured from my family like the rest of the wounded, without discrimination. It’s my professional duty, but the personal pressure was immense,” Amer said.

For his part, Firas al-Kahhal said, “The dangers facing members of the Civil Defense elements are tremendous. So before I go to work in the field, I say goodbye to my family as if I would not return. Especially since the nature of my work requires me to be present at the bombing site.” He pointed out that while he was away, his family is forced to live in emotional distress.

Mu’ayyid al-Hafi, a Civil Defense member in the central sector of Eastern Ghouta, almost fell victim to the bombings while carrying out his humanitarian duty. “I was with my colleagues in the field, working to evacuate the wounded. We were targeted by airstrikes and thought we would be the new victims, but God spared us,” he said.

Despite everything, we do our job

“We continue our work non-stop; it is a duty no matter how frequent the regime’s bombings and campaigns. Our duty to civilians requires us to do so,” said al-Hafi.

In the past few days, the central sector of the eastern Ghouta has witnessed an unprecedented bombing campaign. Al-Hafi is forced to work long hours without rest. He said, “I usually get two or three hours of interrupted sleep a night.” He points out that despite these circumstances, however, any dereliction of duty on the part of the White Helmets would cost civilian lives.

Siraj Mahmoud said that since the regime’s large-scale offensive on Eastern Ghouta, “We have lost all of the Civil Defense’s equipment and centers, but the voices of women and children from the rubble make it imperative for us to work with our hands. A White Helmet is happiest when we successfully pull a survivor out of the rubble and he or she is still alive.”

It is worth mentioning that the salary for Civil Defense members in Eastern Ghouta amounts to $150 per month and a food allowance of $80. Every three months, the member receives a bonus allowance of up to $150, according to a Civil Defense official.

Maher Al-Hamdan is a Syrian citizen journalist. He has worked with several international and rights organizations.