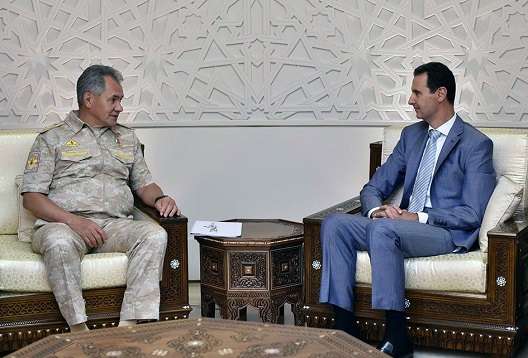 The Syrian opposition is facing unprecedented regional and international pressure. At the Riyadh 2 Conference last August, Saudi Foreign Minister Adel al-Jubeir told the Syrian opposition about the stances of various countries on the Syrian issue. While many preferred not to have the Assad regime remain in power, the controversy was about timing. Some countries want Assad to leave at the end of a transitional period and others to see him go at the beginning.

Yet the convictions Jubeir spoke of are not reflected on the ground, particularly in light of American lack of interest n the Syria conflict. With the United States turning instead to the fight against the Islamic State (ISIS, ISIL, Daesh), Turkey’s focus on achieving and securing its national interests, and the Gulf state’s (Qatar and Saudi Arabia) preoccupation with their own crisis, indicates an international shift towards “a realistic solution” that some international powers have begun to adopt, namely, accepting the idea of Assad remaining in power.

Recent developments related to the Kurds, whether in Iraq or Syria, introduces a very important variable between Iran, Turkey, and Russia. The Kurds are becoming a common threat to the national security of both Turkey and Iran. For that reason, Turkey accepted Iran as a guarantor of the Astana Talks. This in turn put the Syrian opposition, which trusts Turkey, in a difficult position vis-à-vis the Syrian people. Some analysts attribute Turkey’s acceptance of Iran’s involvement in the Astana talks to its conviction that an understanding with Iran is the only way to curb its influence in Syria and avoid the repercussions of Iranian fantasies to encroach on the Turkish-Syrian border in Idlib and along the coast. This was followed by a number of high-level visits between the leaders of the two countries, the most recent of which being Turkish President Recep Tayyip Erdoğan’s reception of Iranian Chief of Staff Mohammad Bagheri in Ankara last August. Erdoğan also received Russian President Vladimir Putin in September.

The United States, on the other hand, has failed to adequately manage the Syrian crisis, particularly in the military domain. This failure has contributed to a strengthening of the Assad regime’s weak position; granting it a number of advantages. The US prevented opposition groups from obtaining advanced weaponry, namely anti-aircraft weapons, which would have allowed the armed opposition to decide the battle against the regime militarily in mid-2013, or at least reduce civilian casualties from aerial bombardment of cities and villages under opposition control. Moreover, the United States failed to respond to the chemical attacks in Eastern Ghouta in a manner commensurate with the offense.

But the United States’ greatest mistake was the vacuum it created which allowed Russia to directly intervene in favor of the Assad regime. Ignoring the danger of Iranian militias and focusing only on extremist militias like Jabhat al-Nusra was also a mistake that allowed Iranian influence to expand in Syria. In part, these miscalculations by the US led to the opposition losing areas of control to the regime; areas that had previously eluded its grasp. Consequently, while the United States confined itself to fighting ISIS and rejected opposition requests for support to fight the regime. Thus, the regime reaped the rewards of this campaign by promoting itself as the sole existing representative of the Syrian state and that the Syrian Arab Army (SAA) is fighting “terrorists” and reclaiming Syrian territory.

Other US mistakes include the US-led coalition’s demand that the Free Syrian Army (FSA) withdraw from the Syrian desert lands towards Jordan and hand over the area to regime forces, explicitly threatening to cut off support for any such faction that refuses. The coalition also allowed regime forces in the desert lands to expand all the way to the Iraqi border and Deir Ezzor city and to take control of gas and oil pipelines, blocking the FSA advance on Deir Ezzor.

Meanwhile, Saudi Arabia’s foreign minister is no longer making public statements calling for Assad to go. Despite directing considerable resources to the opposition to subvert Iranian influence, Saudi Arabia has lost interest in Syria as its conflict with Qatar, where Syria is also a major sticking point, has resulted in the Gulf crisis between the two nations. For more than a year, the Kingdom has gradually withdrawn from Syria, weakening the armed opposition which once relied heavily on Saudi support for cash, arms, and ammunition.

In addition to Saudi Arabia, Jordan’s position towards Assad has changed markedly, with Jordan’s Minister of State for Media Affairs, Mohammad al-Momani, saying, “we are talking about relations between ourselves, the Syrian State, and the regime in Syria that are moving in a positive direction.”

Europe’s erratic approach has also strengthened the Assad regime. This was reflected in French President Macron’s statements last April during his election campaign, where he stressed that Assad is the enemy of the Syrian people, that he must be tried before the ICC, and that as president he would work to see that happen. In recent months, France has even sought to obtain evidence of Assad’s responsibility for the use of chemical weapons in Khan Sheikhoun. These efforts culminated in a UN report clearly indicating that that the Syrian government was behind the massacre. However, such statements have differed since Macron was appointed president of France. He has since stated that Assad’s departure is not a priority, adding that Assad is not an enemy of France.  In addition to French flip-flopping, British Foreign Secretary, Boris Johnson suggested that Assad should be allowed to take part in presidential elections as well as the possibility that he could remain in power if he won, as part of a solution to the conflict in Syria.

These reversals did not stop with the countries active in Syria abandoning their demands that Assad must step down, but went as far as UN Envoy to Syria, Staffen de Mistura, saying that, “the Syrian opposition must be realistic enough to realize they did not win the war.”

All of these developments at the international level mean that any serious threat to the rule of Bashar al-Assad has gone by the wayside. It also seems that Assad was able to account for these developments and began to take practical steps to show that the Syrian state is still functioning and that the Syrian crisis is moving towards its end. The Syrian regime recently launched a systematic campaign against the tumult of war, removing several checkpoints from areas under its control and also successfully completing the Damascus International Trade Fair after a five-year hiatus due to the fighting, which brought in many foreign visitors. In this regard, Assad has worked hard to bring back soccer players who defected from the Syrian national team and was successful in the case of both Firas al-Khatib and Omar al-Somah who returned to the Syrian squad to participate in AFC World Cup Qualifiers.  He also made a long stop in Hama on Eid al-Fitr and visited the families of dead and injured SAA soldiers in the countryside loyal to the regime on his way to the coast in his first foray outside Damascus since the revolution began.

The change in these positions can be understood as a revival of political realism—each nation-state operating solely based on its national interests—and the failure of the international systems that might have worked to resolve this—whether the United Nations, US leadership, or a body formed specific to the crisis. The result is that each nation state is convinced that Assad is the problem, but, unable to take practical steps to get him to step down, is forced to accept him and do its best to protect itself from the fallout. The situation is unstable, but with no international system able to resolve the crisis, there is little each state can do on its own, and Assad looks more secure every day.