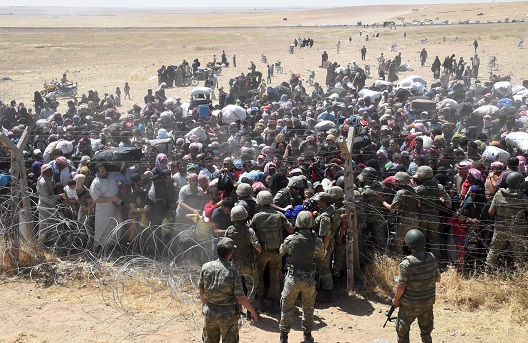 Frederic C. Hof, Senior Fellow with the Atlantic Council’s Rafik Hariri Center, delivered an address on June 8 to an audience at the NATO Defense College in Rome. His remarks considered the problem facing the United States and President Barack Obama on how to defeat the Islamic State (ISIS or ISIL). Without a shift in US policy to address the problem in both Iraq and Syria—and soon—the anti-ISIS coalition may find itself fighting the same battles against a much more entrenched extremist group. Please read excerpts of his remarks below.

The Obama administration’s anti-Islamic State (ISIS or ISIL) strategy focuses heavily on Iraq, all-but-ignoring the fact that chasing armed men in jeeps with high-performance aircraft in Syria will enable ISIL to sustain its Iraqi operations and sink roots in Syria: a place where (unlike Iraq) it has no natural constituency. The administration understands quite clearly that regime mass-casualty tactics are a recruiting asset for ISIL that encourage Syrians to turn to ISIL for protection. Still, to conceive of the anti-ISIL military campaign as a multi-year undertaking requiring strategic patience and time to build a tiny ground force is to condemn Syria to failed statehood. It would allow ISIL to sink deep roots where it can, either in collaboration with the Assad regime or in opposition to it, causing Syria to be an open, bleeding wound for years and even decades to come. As long as ISIL is relatively unmolested in Syria, its bases and headquartered elements there will be able to sustain indefinitely combat operations in Iraq.

Can the objective of degrading and destroying ISIL be achieved with a strategy that focuses the military effort on Iraq while keeping Syria at arm’s length, harassing ISIL from the skies and remaining inert in the face of Assad regime atrocities? The answer, in my view, is no. But that is the easy part. There is no shortage of American officialdom—military and civilian—that sees the current strategy as nonsense. But is there an operationally sensible and feasible alternative? I believe there is an alternative worth exploring: one that could avoid both a full frontal military assault on the Assad regime and the specter of US boots on the ground; an alternative that President Barack Obama might even consider; one he might find not in serious conflict with his Iran nuclear objective.

Although the administration sees Iraq as the center of gravity and the prize to be won in the war against ISIL, Syria may actually be the place where a decisive, near-term victory is possible. But this would require a fundamental change of strategy: one attracting regional ground forces to work with coalition aviation to sweep ISIL from Syria. But to have any hope at all of attracting capable forces for this purpose—and the Turkish Army comes to mind—the administration would have to agree to some steps that the Assad regime and Iran would find objectionable. After all, Turkey and others see ISIL as the horrifying, repugnant symptom of the underlying disease: the murderous illegitimacy of the Assad regime.

I am not willing to assume that US policy concessions of this nature would be enough to bind regional forces to a decisive ground campaign in Syria against ISIL. It may well be that key players are, in the end, content to blame the United States for the catastrophe in Syria. It may well be that they will hold out for that which will not happen: an all-out US combat assault on the Assad regime.

The challenge faced by the current strategy, however, is that its operational connection to the objective—the destruction of ISIL—is tenuous at best. Defenders of the strategy answer its critics by saying that the normal US impulse for speedy results should be avoided: that this is a multi-year undertaking that will require the rebuilding of an Iraqi national army and the creation—from whole cloth—of a ground combat component in Syria. What the defenders may not appreciate, however, is the extent to which time—especially in the Syrian theater—is an ally of ISIL.

Again, ISIL has no natural Syrian constituency. There does not exist in Syria a popular base that sees ISIL as a strategic or even tactical ally or as a remedy for anti-Assad regime grievances. But give ISIL a year or two or three to sink roots in Syria and its destruction becomes all the more difficult and problematic. Give the Assad regime more time to inflict mass homicide and Syrians will increasingly look to ISIL for protection. Professional military ground forces in sufficient numbers and supported by coalition aircraft can sweep ISIL from Syria in relatively short order, thereby delivering a crippling blow to ISIL operations in Iraq. But even if the administration were convinced of the wisdom of this course and were willing to pay a policy price in terms of supporting a real alternative to the Assad regime, it is far from clear that Ankara and others would ever take “Yes” for an answer.

What I would like to see is for my country, its allies, and its friends to view the ISIL phenomenon in Iraq and Syria as the malignant filling of a large, contiguous, cross-border vacuum created by political illegitimacy in both Baghdad and Damascus. On the Syrian side of this deadly battle, I would like to see my country, its allies, and its friends take steps to stop or at least complicate the wanton slaughter of civilians. I hope that in our diplomatic interactions with Iran on nuclear matters we are trying to persuade our interlocutors to stop their client’s criminal conduct, or at least the most egregious aspects of it. If diplomatic demarches fail to achieve results, I would definitely favor military steps—albeit well short of invasion, occupation, strategic bombing, and the rest—aimed at complicating the regime’s ability to perform acts of mass murder.

There are those who say that President Obama would be content to turn over the Syrian problem as is to his successor. The problem with that is the term “as is.” Left on its current trajectory, the Syria of January 2017 will be uneasily partitioned between two ruthless, murderous criminal enterprises. Just as we say in 2015 that the problem of Syria would be much more manageable now had proper decisions been taken in 2012, 2013, or 2014, so I fear we will say in 2017—absent strategic changes now—that things would be easier had we taken the proper actions in 2015.

We cannot afford to let things drift for another twenty months. If I were Syrian, at this point I would conclude that I am on my own—that I should expect meaningful protection and assistance from no one in the West. But as an American whose President has said things publicly that have encouraged Syrians to believe that help is on the way, I want the United States and its partners to protect civilians, destroy ISIL, and set the stage for genuine political transition and the long march toward political legitimacy in Syria. If President Obama agrees that these are proper objectives, then clearly a new strategy is required.

Image: Turkish soldiers help Syrian refugees as they cross into Turkey on the Turkish-Syrian border, near the southeastern town of Akcakale in Sanliurfa province, Turkey, June 4, 2015. More than 3,000 Syrians fleeing clashes between Islamic State and Kurdish fighters have crossed into Turkey since Wednesday, a Turkish government official said. (Reuters)