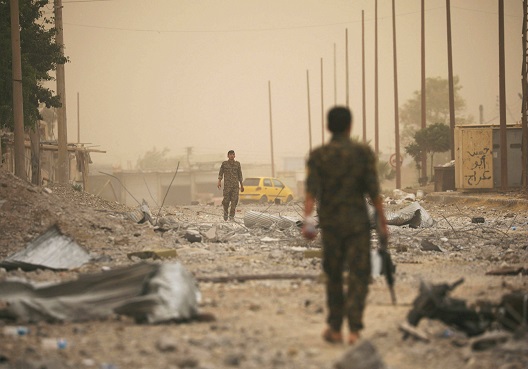 Alongside the US-backed forces storming into Raqqa is the all-Arab tribal group, the Syrian Elite Forces (SEF), headed by former Syrian political opposition leader, Ahmad al-Jarba. The SEF is composed of primarily two influential Arab tribes in the northeast and eastern towns of Syria: al-Shu’aytat and Shammar. So far the Syrian Democratic Forces (SDF), led by the Kurdish People’s Protection Units (YPG), has already appointed a civilian council missioned to administrate Raqqa governorate once the so-called Islamic State (ISIS, ISIL, Daesh) is defeated. The question on governance of Raqqa and other Arab-majority areas in the northeast post-ISIS, remains unclear. Given the SEF’s Arab and tribal nature, the group could play an instrumental role in easing ethnic tensions and governing the region. However, the multilayer nature of the war in Syria and the complex operations against ISIS could deter such a role, leaving the future of Raqqa unsettled.

Although the SEF is not part of the SDF, the force is an official member of the US-led international coalition fighting ISIS. For the last six months, the SEF has fought alongside the YPG and other SDF contingents against ISIS positions in Hasakah and Raqqa.

The SEF was established by al-Jarba in May 2016. According to the SEF spokesperson, Mohamed Shaker, the force is estimated at 3,500. Shaker told the author that fighters come from villages in Raqqa, Deir Ezzor, and Hasakah governorates. The Arab force, Shaker says, reached an alliance with the US-led coalition after a series of discussions held by al-Jarba with the US special envoy for Syria, Michael Ratney, the Pentagon, and the leadership of the anti-ISIS coalition.

The SEF joined the SDF in November 2016 for the Euphrates Wrath operation aimed at isolating Raqqa by cutting all supply routes leading to and from the city. Al-Jarba, is a tribal leader from the powerful Arab Shammar clan and a staunch ally of Saudi Arabia, and has been praised by the US Department of Defense for his “ability to mobilize local forces” in support of the Raqqa offensive, given his tribal relations in the northeastern region. Despite that, the SEF only receives logistical support and air cover from the coalition. Shaker worryingly says, “there is no direct arming of weapons currently,” adding that the group operates with private financial contributions.

Circulated video footage and media reports show the SEF advancing with the SDF on frontlines against ISIS in Raqqa. They captured al-Assadiya village in the north of Raqqa in late May. By July 3, the SEF entered Raqqa’s Old City in what seems to be a significant development for the operation.

The US decision to solely fund and arm Kurdish forces in the fight against ISIS in Raqqa has raised many concerns, mainly the risk of fueling conflict between Arabs and Kurds, given the Arab majority inhabiting Raqqa. The debate over governance of Raqqa post-ISIS is significant and relevant to the decisions and strategies implemented in the region today. Shortly after the arming decision, the SDF announced on June 6 the beginning of the Raqqa operation.

Before the initiation of the campaign, however, the SDF announced the formation of a civilian council to rule Raqqa after it is liberated. Although the majority of council members are Arabs, Kurds are included; and one Kurdish member holds the co-chair of the council. With ethnic tensions amplified, it remains uncertain whether the appointed council can practically secure rights for Raqqa inhabitants. Some analysts suggested that a conflict could result from a Kurdish-led operation to recapture Raqqa and that the US and other coalition powers may prompt an ethnic conflict between Arabs and Kurds, creating more fragmentation among Syrian stakeholders which will ultimately damage the war-torn country’s peace process. But the SEF enjoys a close relationship with Syrian Kurds that may enable the group to play a role in easing these potential tensions.

When al-Jarba headed the Syrian political opposition between July 2013 and July 2014, he was seen making unprecedented efforts to include Syrian Kurdish members in the largely Arab entity. Further, his election to the presidency of the National Coalition for Syrian Revolutionary and Opposition Forces (SNC) was a setback to the rival Muslim Brotherhood bloc of the opposition, a Qatar- and Turkey-backed group, that has predominantly controlled the SNC and tended to isolate Kurdish representation. Al-Jarba left the SNC in early 2016 and founded Syria’s Tomorrow Current (STC), a Cairo-based political party, calling for a secular and pluralist post-war Syria and now serves as the political wing of the SEF.

Since establishing the STC, al-Jarba is engaged in discussions with the Kurdish Democratic Union Party (PYD), the political wing of the YPG, that is the ruling power over northern parts of Syria under what it calls the “self-rule authority.” In September 2016 in Cairo, al-Jabra met with Eldar Khalil who represents the PYD, and the two leaders signed a pact to partner in forging a political solution to the Syrian crisis. According to Monzer Akbik, a former SNC member and the spokesperson of the STC, both sides agreed on the territorial integrity of Syria and unity of the Syrian peoples, which allowed them to cooperate further militarily in northeastern Syria.

However, the PYD holds aspirations for autonomy and perhaps independence in northern Syria. The Kurdish semi-autonomous self-rule authority declared in May 2016 a federalist system for northern Syria, a move that provoked greater resentment from the Syrian Arab opposition. Akbik told the author, “the agreed upon memorandum didn’t mention federalism, but only decentralization,” highlighting apparent differences in the visions of the two groups. “We consider the PYD as an important Kurdish component in Syria,” however, added Akbik.

Despite their differences, the SEF and YPG are effective in leading battles together against ISIS so far. It remains to be seen whether or not their differences may resurface after ISIS is defeated, especially on Kurdish governance of Arab areas. Shaker said that his group hopes the SDF will follow through on its promise to hand the city over to a local governing council.

The US support and reliance on Kurdish forces to fight ISIS in northern Syria is problematic for many reasons. The PYD is viewed by Turkey as an offshoot group of the Kurdistan Workers Party (PKK), a Marxist organization that has been in armed conflict with Turkey for over 30 years. Turkey, the United States, and the European Union consider the PKK a terrorist organization. There have been unsettled claims from the PYD that they are not linked to the PKK, but the Syrian Kurdish group is regardless a toxic issue for the Turks.

Akbik said that his group does not share Turkey’s vision for Syria. However, he added that al-Jarba and the STC have “special” relations with Saudi Arabia, the United Arab Emirates, Jordan, and Egypt. This statement and others by STC officials indicate that al-Jarba’s party was partially created to support the Saudi-led regional campaign challenging Turkey and Qatar’s dominance over the Syrian opposition.

The Turkish military incursion in Syria in August 2016—backed by Free Syrian Army (FSA) factions—was largely initiated to limit the YPG expansion west of the Euphrates. Today, with the Raqqa operation, Ankara opposes the YPG leading role, fearing the Kurdish group gaining further territory and international support. While there has been some consensus between the United States and Turkey over the role of YPG after the libertarian of Raqqa, a confrontation may still be possible between the Turkish army and FSA factions on one side and the SDF on the other, regardless of whether the Arab SEF would take a governance role.

Akbik added that there are discussions underway on whether the SEF will play a governing role, given the force composition of Arab fighters from Raqqa. “The US administration, repeatedly affirmed that post-ISIS governance of Arab territories would be handled by local councils,” he added. “There is a clear understanding on that.”

Abdulrahman al-Masri is a Syrian journalist and analyst who focuses on Middle East politics and security and foreign policy. He is also a fellow with the SalamaTech project at The SecDev Foundation, focusing on information warfare and digital safety in Syria. Follow him on Twitter at @AbdulrhmanMasri.