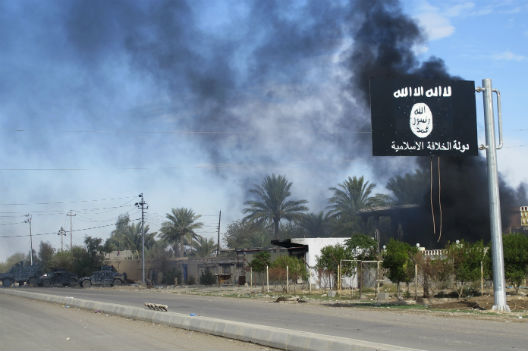 By building its own state, the Islamic State (ISIS) seeks to make a mark for itself by transforming from a group of gangs roaming the desert to a modern state larger than Great Britain that extends across Iraq and Syria. It has possession of major sources of funding from both its manufacturing and underground resources, including oil, agriculture, and dams; however, the group has struggled with administrative issues since it first gained control over its territory, relying on a policy of intimidation in which it resorts to executions, decapitations, crucifixions, and amputations of hands and legs.

Al-Baghdadi has ruled over his “state” by dividing it into several provinces in which he appoints a governor, deputy, and Sharia official to run each one’s administration via offices or bureaus (in Arabic they are called diwan, with the plural being dawawin). The word diwan is used in this article to be consistent with ISIS’s choice of terminology. This article provides a brief description of ISIS’s diwans and how they actually operate.

Diwan of Education
This diwan is responsible for schools, institutes, and colleges created by ISIS. The diwan has changed their syllabi to eliminate certain subjects—such as philosophy, art education, history, and sociology—under the pretext that they advocate polytheism. Likewise, it has eliminated everything related to Darwinism from all education curricula.

Diwan of Hisba (Public Morality Enforcement)
As one of the largest bureaus, the Hisba Diwan employs a large number of people and concentrates on surveilling the population, enacting the group’s laws, and punishing offenders. It resembles the “Committee for the Promotion of Virtue and the Prevention of Vice” in Saudi Arabia.

The diwan is comprised of a large number of women to help arrest and punish female offenders. It is the most well-known diwan as a result of its daily and direct contact with the civilian population, its usage of torture, and the cruelty of its interactions with residents. Moreover, it is one of the best funded diwans, thanks to the fines it gathers from residents, which has made it the focus of attention of many of the group’s commanders.

The diwan has been subject to many instances of theft carried out by individuals who subsequently flee to areas outside of the group’s control. It is estimated that approximately 50 million dollars has been stolen from the bureau.

Diwan of Soldiery
Comparable to the general directorate of recruitment, this bureau manages the recruitment of young men, children, and women, spreading them out among other districts and combat fronts; it also arranges their salaries, family affairs, and the services provided to them. In addition, the bureau comprises a branch of the Islamic police—which are functionally equivalent to the military police—that are responsible for both monitoring fighters’ and soldiers’ posts and transporting them from one area to another.

Diwan of Health
This is the diwan responsible for all health-related matters and sectors—such as hospitals and health centers—in the group’s territory, which suffers from disease outbreaks and poor public healthcare.

The bureau has issued a number of what it calls “rulings” that bar doctors from traveling under penalty of confiscating their clinics and property. On top of that, the group has closed all medical and humanitarian organizations working in their territories and arrested those working within them under the pretexts that they are working for foreign entities and conducting missionary work, which has led to the spread of diseases and epidemics. Meanwhile, the diwan has banned doctors from treating patients of the opposite sex, which has created a major gap in healthcare provision.

Diwan of Treasury
A modern diwan, it oversees both money collection, such as transaction fees, and processes of buying, selling, and renting real estate. It seizes abandoned homes of those who are either wanted by the group or have fled to areas outside of its control. Houses of Christians, Yazidis, and Kurds are also confiscated and then handed over to ISIS authorities.

Diwans of Zakat and Agriculture
These Diwans specialize in collecting obligatory taxes on shops and crop yields. They also restrict crops harvested without a document from the diwan showing that the duties on it were paid. While the group claims to distribute 10 percent of its collections among citizens and justifies them on the basis that they cover expenditures, the taxes have led to price increases in ISIS-controlled areas.

Diwan of Proselytizing and Mosques
This is the diwan tasked with organizing mosques’ affairs, hiring their preachers, and choosing their courses in Sharia. It also ensures that all mosques present a uniform Friday sermon and that their prayer times are updated. In addition, the diwan organizes religious and proselytization festivals that aim to recruit children and young people to the group by distributing gifts and awards.

Diwan of Services
This diwan is synonymous with that of a municipality in that it covers public services, such as water, electricity, sewage, roads, and bridges, which are markedly decrepit. The bureau has yet to carry out any real development projects and instead limits its work to superficial concerns. Employees of the bureau do not even receive set wages, but rather are granted periodic monetary rewards.

Diwan of Resources
Resources refer to all materials found underground, such as oil and minerals, as well as antiquities. Collectively, these sources make up the largest sources of the group’s funding, as it goes on to sell oil, antiquities, and everything else that is found within its areas of control. Similarly, the diwan oversees cement and sulfur factories in Mosul, the production of which is estimated to be the equivalent of approximately $200,000 per day.

Diwan of Fay’ and Ghana’im (War Spoils)
This diwan is responsible for counting and safekeeping the wealth captured from military operations.

Raqqa Is Being Slaughtered Silently (RBSS) is a campaign launched by a group of non-violent activists in Raqqa to shed light on the Assad regime’s and Islamic State’s atrocities. Follow them on their website raqqa-sl.com/en/, on Twitter @Raqqa_SL, and on Facebook at https://www.facebook.com/Raqqa.Sl.

In collaboration with RBSS, SyriaSource has put together an interactive graphic summarizing ISIS’s self-described structure. Check out the graphic and its introduction on SyriaSource here.

Image: PHOTO: Smoke raises behind an Islamic State flag after Iraqi security forces and Shiite fighters took control of Saadiya in Diyala province from Islamist State militants, November 24, 2014. Iraqi forces said on Sunday they retook two towns north of Baghdad from Islamic State fighters, driving them from strongholds they had held for months and clearing a main road from the capital to Iran. There was no independent confirmation that the army, Shi'ite militia and Kurdish peshmerga forces had completely retaken Jalawla and Saadiya, about 115 km (70 miles) northeast of Baghdad. Many residents fled the violence long ago. At least 23 peshmerga and militia fighters were killed and dozens were wounded in Sunday's fighting, medical and army sources said. REUTERS/Stringer (IRAQ - Tags: CIVIL UNREST CONFLICT MILITARY TPX IMAGES OF THE DAY)