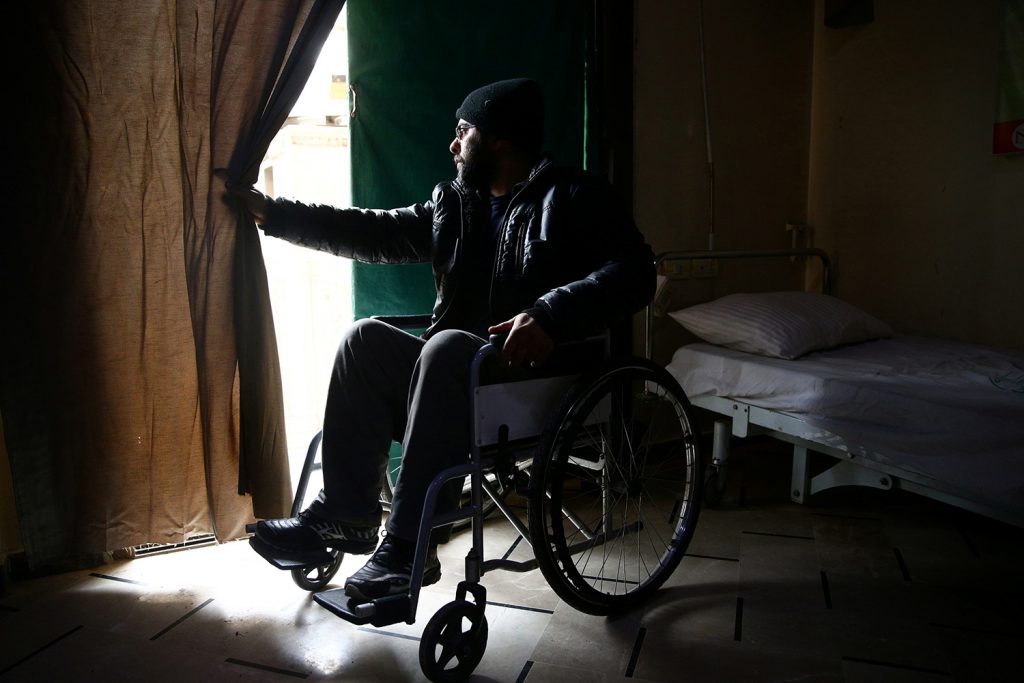 A band plays “Farewell to the Martyr” as men in crisp uniforms and red berets carry the casket of First Lieutenant Deioub out of the Martyr Zahi Azraq Military Hospital in Latakia, Syria. The pallbearers are flanked by more members of Bashar al-Assad’s military, as well as the Governor of Latakia province and the secretary of the local Baath party branch. Such scenes play out every day in hospitals across the country. For all Syrians, honoring the men who died fighting for their side’s cause is a central social event. But while martyrs are immortalized in life-sized posters on every street corner, wounded fighters, known as “living martyrs,” risk becoming outcasts in their communities.

“It is really difficult for a person with a handicap to get a steady job,” says Mohammad, a member of the loyalist National Defense Forces (NDF), “and the social stigma is a real thing.” Mohammad injured his back several years ago and now runs an NDF aid center in Homs. He was able to transition into a civilian role after his injury due in large part to his family’s connections. But most wounded fighters are not so lucky. “The biggest problem is for veterans in the city who cannot afford to pay for a house or place to live and are forced to become homeless,” says Mohammad, “everyone in Syrian society is ashamed of this.”

Since most breadwinners in Syria are still men, the death or debilitating injury of a soldier can be devastating for his family’s ability to pay for its most basic needs. This issue is equally detrimental to opposition fighters as it is to pro-government soldiers. “Many people lose an arm or even a few fingers,” says Mohammad, “and that can ruin their life since most rely on manual labor and they have no education.” The government is supposed to pay half a soldier’s monthly salary as a stipend if he is too wounded to continue fighting, with the possibility of receiving up to 80 percent of his salary depending on the severity of his injuries and the economic conditions of his family. Yet according to Mohammad, in almost all cases “you get nothing from Damascus.” Such aid, he says, is dependent on having “decent human beings distributing it and not someone taking advantage of the system for more coin in their wallet.”

Ali, a member of the loyalist Tiger Forces, agrees. “The government is supposed to provide some material compensation to their families…but there is neglect due to the war and corruption.” Both Mohammad and Ali cite the disastrous economic conditions in Syria as a major factor for the lack of support received by both living martyrs and the families of martyrs. Even when wounded men receive their government stipend, it is often not enough. “Payments have not risen to cover the cost of living,” Mohammad explains, and “no wounded veteran can live a ‘normal’ life without some help from organizations or help from family.”

“Living martyrs” have taken to social media to air their grievances and raise awareness about their suffering. In November 2018 one pro-regime Facebook page dedicated to reporting on martyrs shared the story of an amputee in the coastal city of Jableh. The man went to the town’s veterans office to file some paperwork only to have the official on duty claim the man had in fact never served in the army and was now required to report for his compulsory service. In another case, a local politician and advocate for wounded fighters wrote in August 2017 about a half-paralyzed fighter with three injured brothers whose monthly stipends were regularly delayed, leaving him with barely enough money to pay his rent.

Such stories of corruption and maltreatment appear commonplace. On a small Facebook page dedicated to supporting wounded pro-regime fighters, men post stories of their economic struggles and poor treatment from government officials. “Imagine you have no legs and go to the office inquiring about a job,” writes another former soldier, “when I ask the official he says ‘You the injured from the war are the reason the country’s economy has been destroyed and then how do you want to become employed with your legs cut off. We cannot benefit from you in any way anymore.”

“Mr. President,” the veteran continues, “we will not die without honor and we will not live without honor.” One commenter complained that, “words of praise, heroism, and appreciation do not feed bread or heal wounds, and this sufferer needs a practical and effective solution that helps him address what has befallen him.”

Many Syrians—veterans and civilians—have turned to non-governmental sources for support. Not only does Mohammad’s aid center support wounded veterans, he says it also provides relief packages to “anyone who does not get enough support from the state.” Currently he only serves the neediest 150 people in his area due to a lack of resources, but hopes “the state will also get involved” next year so that he may expand services. Without state support, Mohammad’s center relies on local businesses and “NDF members.” According to a recent report by Human Rights Watch, the NDF receives some funding directly from the United Nations via a front non-governmental organization known as the “al-Shaheed Foundation.”

According to the United Nations, within Syria there are 11 million civilians in need of regular aid, with an additional five million “in acute need of help.” The impacts of the poor economy are felt doubly by the wounded. Not only do they not receive the monthly stipends needed to buy food and pay rent, many also struggle to find adequate medical treatment. “I can’t get the drugs necessary for my back pain,” says Mohammad, “There are medical experts with good competency, but they can’t do much with limited supplies.”

The situation is even worse for wounded opposition fighters, who rely entirely on their militant faction for aid. Elizabeth Tsurkov, a Fellow at the Foreign Policy Research Institute, speaks daily with opposition activists and fighters. “Let’s say you were injured in 2012 fighting for the Farouq Battalions,” Tsurkov told this author, referencing a once powerful rebel faction that ceased to exist by 2017, “who will you turn to right now?” Even when factions still exist and have some funds to support their wounded fighters, most men are unable to access the necessary medical aid. While regime-run hospitals suffer from acute shortages of medicine and supplies, opposition-run hospitals are routinely targeted and destroyed by Russian and regime planes. Anything more than basic treatment requires Syrians to go to Turkey, yet according to Tsurkov, Ankara routinely closes its borders to those seeking help.

Beneath the physical injuries lie invisible scars. Equally widespread and debilitating, trauma poses an especially pervasive threat to the future of Syrian society. Tsurkov, whose work focuses on the human costs of the war, warns that mental health trauma is passed down through the ages; “trauma will be transferred through generations, through epigenetics and just through the narratives that people tell their children and their children tell their children.” Mohammad voices a similar concern: “mental health of wounded soldiers should be prioritized more from my perspective, because I have seen people struggle and not getting any help.”

While the world counts the dead and those who have fled, the scars of the war cut far deeper, leaving a permanent mark on Syrian society. According to Mohammad, “for every tenth fighter dead, there are twenty-five to thirty fighters with bad injuries.” Already Syrian society has begun adapting to this reality: women have increasingly taken up jobs traditionally belonging to men, especially in the agricultural sector and civil society. But the war drags on, the fighting seemingly without end. More than 358,000 civilians were forced from their homes in the last two months alone due to a massive Russian and Syrian regime bombing campaign in the province of Idlib. Hundreds more government and opposition combatants were killed and wounded during that time as well.

Scholar Nibras Kazimi recently wrote that “the magnitude of dislocation nowadays, both in terms of physical space and societal narratives, is much larger and runs far deeper” than at the inception of the Syrian state following the fall of the Ottoman Empire. As Kazimi states, “many of the changes that have occurred [in Syria] are as yet untallied and unacknowledged.” The physical and mental trauma inflicted on millions of Syrian men, women, and children is already unalterably ripping the seams of the Syrian social fabric.

Gregory Waters is a researcher focusing on pro-regime forces and life in loyalist Syria. Follow him on Twitter: @GregoryPWaters.

Image: Haitham, 35, who sustained a spinal cord injury during the conflict in Syria, that left him paralysed, is seen at a rehabilitation centre where he works as a physiotherapist, in Douma, the main rebel-stronghold in eastern Ghouta on the outskirts of Damascus, Syria, February 14, 2017. REUTERS/Bassam Khabieh