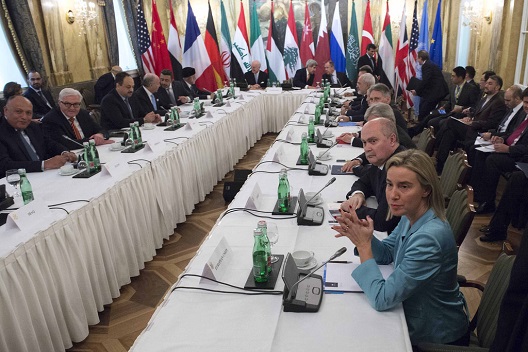 The clearest indicator that the October 30th meeting in Vienna on Syria may have fallen short of a substantive breakthrough was State Department spokesman John Kirby’s awkward attempt to sell the meeting’s communique as an improvement over what was agreed by the Permanent Five members of the United Nations and others in Geneva over three years ago. Salesmanship aside, the future of this Vienna initiative will likely be foretold before the participants reconvene in two weeks. If barrel bombs stop and sieges are lifted—steps that Moscow and Tehran can dictate to the Assad regime—Vienna can emerge as an open door to diplomatic progress and not a time-killing, action-free process amounting to a death warrant and migration incentive for thousands of Syrians.

On the day after the Vienna meetings Russian United Nations Vitaly Churkin announced that the Assad regime had indeed halted its barrel bombing, thereby (in his view) rendering superfluous a draft Security Council resolution that would punish their use through additional sanctions. If true and if sustained this new Vienna initiative has a chance to succeed. Churkin’s announcement is, at the very least, interesting given Bashar al-Assad’s repeated denials that barrel bombs even exist. Perhaps Iran can prevail on Assad to lift sieges denying food and medical care to some 600,000 Syrians.

It is understandable that Syrians—neither the regime nor the opposition—were not invited to Vienna. Neither were they present at Geneva in June 2012. Geneva and Vienna were all about relevant actors in the international community seeking a common approach to ending the Syrian crisis. What is less understandable is why, after 40 post-Geneva months featuring regime barrel bombings, chemical attacks, and sieges deliberately denying food and medicine to the defenseless, civilian protection was given such short shrift in Vienna as opposed to Geneva. After all, how can dialogue and negotiations take hold while civilian populations are under relentless assault?

The Geneva document called for the immediate implementation of a specific plan offered by then Joint Special Envoy Kofi Annan: one that would de-escalate violence and protect civilians. Among other things it said, “In all circumstances, the [Syrian] Government must allow immediate and full humanitarian access to humanitarian organizations to all areas affected by the fighting. The Government and all parties must enable the evacuation of the wounded, and all civilians who wish to leave to do so. All parties must fully adhere to their obligations under international law, including in relation to the protection of civilians.” Geneva conveyed a sense of urgency: all parties must act “without waiting for the actions of others.”

Vienna, by way of contrast, says the following, “Humanitarian access will be ensured throughout the territory of Syria, and the participants will increase support for internally displaced persons, refugees, and their host countries.” There is no mention of the responsibilities of the Syrian Government, which—according to nearly twenty reports by the United Nations Secretary-General—has defied UN Security Council Resolution 2139 and its demand for full access to vulnerable populations. There is no mention of international law and what it mandates for the protection of civilians. There is no mention of the atrocities—still overwhelmingly the responsibility of the Assad regime even in the age of the Islamic State (ISIL, ISIS, or Da’esh)—that cause internal displacements and refugees. Compared with Geneva, the Vienna language is disappointing.

Spokesman Kirby, however, took the view that Vienna was a great improvement over Geneva, and not just because there were more participants (including Iran). He was accurate on one point, “There’s no mention in the 2012 communique about ISIL . . . because back in June of 2012, as you know, they weren’t a factor yet.” He would have done well to stop there.

According to Kirby, there was, “no mention in the 2012 Geneva communique about keeping Syrian Government institutions intact through a political transition.” Yet here is what the Geneva Final Communique says, “Continuity of governmental institutions and qualified staff. The public services must be preserved or restored. This includes the military forces and security services. However, all governmental institutions, including the intelligence services, have to perform according to human rights and professional standards and operate under a top leadership that inspires public confidence, under the control of the transitional governing body.” Vienna? “State institutions will stay intact.” Nothing about human rights, professional standards, or public confidence. Compared with Geneva, the Vienna language is disappointing.

According to Kirby, “as opposed to the 2012 Geneva communique, there was a very express desire of a sense of urgency and to accelerate diplomatic efforts. There was no such discussion of accelerating efforts in 2012.” Yet here is what the Geneva Final Communique says: “Action Group members came together out of grave alarm at the situation in Syria . . . [they] are determined to work urgently and intensively to bring about an end to the violence and human rights abuses and the launch of a Syrian-led political process leading to a transition that meets the legitimate aspirations of the Syrian people and enables them independently and democratically to determine their own future . . . All parties must now engage genuinely with the Joint Special Envoy.” Vienna? “It is imperative to accelerate all diplomatic efforts to end the war.” As vacuous as the Vienna formulation is, there is nothing particularly wrong with it. But why misrepresent Geneva?

There are many references in the Geneva Final Communique to a “Syrian-led political process” and “Syrian-led transition.” It even asserts, “It is for the Syrian people to determine the future of the country,” and “It is for the people of Syria to come to an agreement, but time is running out,” and, “The parties must be prepared to put forward effective interlocutors to work expeditiously towards a Syrian-led settlement that meets the legitimate aspirations of the people.” True, the word “owned” eluded the Geneva drafters. Is this substantively important?

Mr. Kirby was doing his duty in trying to portray Geneva as an unattractively deficient foil for Vienna. Briefing the press requires being prepared to answer challenging questions, such as why didn’t the participants at Vienna simply update, endorse, and invigorate the Geneva blueprint for political transition in Syria? By mischaracterizing the contents of Geneva Final Communique Mr. Kirby conveyed the idea that Vienna is something new and better. But the mischaracterization leaves behind a trail of doubt marked by a troubling question: is there something defective about the product that dictated this kind of marketing?

If pursued faithfully and well, the Vienna Joint Communique can spur the implementation of what was agreed at Geneva on June 30, 2012. If it is not, it will serve as yet another time-killing excuse for a morally ambivalent and operationally challenged West to avoid protecting Syrian civilians from mass murder in Syria. Geneva has not yet been implemented because the regime of Bashar al-Assad has rejected it totally. Tehran and Moscow have sustained it in its rejection. If this rejection continues to be upheld, and if Iran and Russia do not stop the mass murder now, an action-killing, apathy-inducing Vienna agreement will be a death sentence for thousands of Syrians and yet another incentive for mass migration.

But if barrel bombs actually stop falling and sieges get lifted now—well before the next meeting in two weeks—Vienna will emerge as a serious and productive undertaking. If Moscow and Tehran exercise the leverage they have to stop the atrocities and set the stage for Syrian dialogue and Syrian negotiations, Vienna will be a landmark diplomatic achievement. It will have set the stage for the implementation of the Geneva political transition blueprint. If it does, Spokesman Kirby will be able to sell, on its own merits, a product he knows is sound. Indeed, such a product would sell itself.