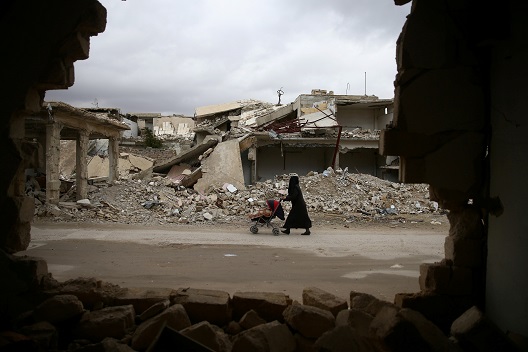 Battles have erupted in recent weeks between regime forces and rebels in the area of Ain al-Fijah and neighboring villages, causing the water pumps and the area’s main Ain al-Fijah water facility to cease operation.

The city of Damascus, which is home to between four and six million people according to unofficial statistics, primarily depends on two springs for its water resources: al-Fijah Spring and Barada Spring. The city needs 500,000 cubic meters of water per day, 60% of which comes from al-Fijah Spring, 20% from the Barada Valley, and 20% from smaller wells and springs. Since three of the main springs (al-Fijah, Ain Haroushe, and Barada) stopped supplying the city with water, it now receives only 130,000 cubic meters of water per day—in other words, 370,000 cubic meters less than it requires. This means that Damascus, which was already suffering from a water shortage, lost about 74% of its water resources when the water from al-Fijah Spring was rerouted to the Barada River. Al-Fijah Spring is located about 18 kilometers northwest of Damascus, and Barada Spring is in the plains of al-Zabadani. The towns and villages of the Damascus province are divided into four administrative districts, which have all witnessed clashes between opposition forces and regime forces over the past six years.

The people of Damascus are now suffering from a drought. Given the city’s rising population density, a result of people fleeing from violence elsewhere in the country, on top of Damascus’ original population, residential water resources are on the verge of running out. People have been forced to purchase tanks of water to fill their reservoirs at home. A sense of fear has settled over the city, despite the government’s reassurances and its announcement of an emergency plan allocating between 30 and 35 liters per person per day. Many people we spoke with in the capital reported that this plan was not being implemented, and that several areas in Damascus have not received water since the latest round of clashes began.

Rumors have spread throughout Syria’s capital about opposition forces’ attempts to destroy al-Fijah Spring’s main reservoir, which would ruin the spring and definitively prevent water from the spring from reaching Damascus. This is what residents of Damascus describe today as the real terrorism: the armed opposition’s playing the water card against a city of four to six million people is nothing more than a criminal act, by which the opposition stands to gain only anger directed against it.

The area has great strategic and military significance because it lies on the road that connects the capital of Damascus to the Lebanese border. This road has the most commercial and military importance for the Syrian regime and the forces of Lebanese Hezbollah. The area includes a number of brigades in the Republican Guard, a battalion from the 4th Armored Division, and a military air base. The area where the valley connects Damascus to Qalmoun has been a supply route for opposition fighters to northern Syria, and the valley itself, where Hezbollah is based.

No single group controls the entire Barada Valley. The regime controls most of the area, while opposition forces control areas that have been under siege since 2012 on either bank of the Barada River, which flows from the al-Zabadani area. These opposition forces number about 1500; they belong to several different groups, including Jaysh al-Islam, Ahrar al-Sham, and Fateh al-Sham; the regime is attempting to clear out of the area.

The opposition forces’ control of the main water pumping facility has given them leverage over the past several years. While there are no statistics documenting the number of civilians in the Barada Valley area, the population includes thousands of people who have been displaced from other areas in Syria over the past six years. According to one activist in the area, the number of civilians is likely between 90,000 and 100,000.

The regime is trying to pressure the Syrian opposition and its popular support base there into acquiescing to the agreement it has prepared for them, similar to what happened in Darayya, Muadamiyat al-Sham, and other cities and towns surrounding Damascus. Abdullah al-Qulmoni, an activist and journalist, says that “The goal of the regime’s current attacks is to force opposition fighters and civilians in towns and villages in the Barada Valley to officially accept the initiative it will present to them in the next few days, with similar terms to what happened in other areas in Rif Damascus, in terms of displacing them to Idlib.”

In the coming period, the regime is expected to concentrate primarily on towns and villages in the Barada Valley, after it finishes moving any opposition forces and their supporters from the city of Zabadani and the town of Madaaya to Idlib. This is in accordance with the Aleppo deal, which includes evacuating these two regions in exchange for evacuating the residents of Kefraya and al-Fu‘a, two towns in Idlib loyal to the regime. Alaa Ibrahim, the governor Damascus countryside, confirmed this in a recent statement, saying, “There is ongoing reconciliation in the Barada Valley and Ain al-Fajih. The insurgents are attempting to negotiate some of the conditions, but they have been informed that the conditions will be the same as in Qudsaya and al-Tell.” In a statement to pro-regime newspaper al-Watan, he said, “the state will enter a region free of insurgents; any insurgent who wants to leave will be given secure passage, those who want to remain will have the settlement imposed on them, and those who fail to appear for military service will be given a grace period of six months.”

It is worth noting that opposition forces in the area have cut off the water from Ain al-Fajih to Damascus several times, including once for a period of seven days, seeking to pressure the regime into freeing people it has detained or stopping its bombing of villages in the Barada Valley and the city of al-Zabadani.

While sources in the field close to the regime’s army believe the spring being bombed is unlikely, groups are certainly capable of doing so. In the words of one source, such an act would be “a final point of leverage and pressure using the means they have available to them,” a result of “their lack of ammunition and the siege imposed on them.” However, he adds that combatants in the Barada Valley “are preparing for this operation as a final price for their defeat, threatening to cause the spring’s water to be lost deep in the earth, and threatening to cause Damascus to go thirsty for a hundred years.”

Image: Photo: A woman pushes a baby trolley past damaged buildings in the rebel held besieged city of Douma, in the eastern Damascus suburb of Ghouta, Syria January 8, 2017. REUTERS/Bassam Khabieh