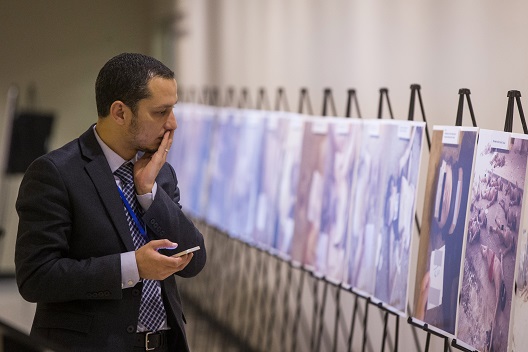 Frederic C. Hof, Senior Fellow with the Atlantic Council’s Rafik Hariri Center, delivered an address on October 28 at the British Parliament. His remarks highlight the courage of one Syrian, known as Caesar, who smuggled out photographs of the Syrian government’s mass killings, in hopes that the West would respond and stop the horrors that are happening. Hof later spoke on CNN’s Amanpour show about the United States considering new options for Syria. Please read excerpts of his remarks to the British Parliament below.

We are here today because of one brave man who saw evil and who tried to stop it. The man we know as Caesar was employed by a government proud of accurate record-keeping; a government pleased to preserve for posterity the photographic images of human beings in its custody tortured and starved to death; a government whose sense of impunity is, to the everlasting shame of the West, well-founded.

One brave man—an officer whose duty it was to photograph the dead bodies of incarcerated people murdered under the authority of Bashar al-Assad—had the temerity to believe that the world would come to the defense of the Syrian people if only it knew what was happening. He smuggled his pictures out in the belief that the images would make the kind of difference that stories and statistics had not. His faith remains unrewarded.

Except for the perpetrators and their supporters in Moscow, Tehran, and elsewhere, no one will deny that mass homicide is taking place in Syria. With those notable exceptions, no one will deny that the penal procedures of the Syrian government feature torture, starvation, and sexual abuse. Apologists aside, no one will contradict the assertion that the survival strategy of Syria’s ruling clan has been one of civilian-centric mass terror. And not even the supporters and the apologists can conceal the fact that over half of Syria’s population has been uprooted, with millions living as refugees in neighboring countries and tens of thousands more voting with their feet as they walk to Western Europe. Even without studying the photographs we see today, we know there is an abomination taking place.

Yet it is an abomination that has failed to meet the standards of the West for action; action that might mitigate its worst aspects. Senior officials assure us it is not genocidal in nature; it is only mass homicide, and therefore not subject to the “Never Again” standard that comes so easily to the lips of our political leaders. Responsibility to protect? Ah, but this remedy is lodged not with states having the ability to act, but with the international community. And the international community is represented by the United Nations Security Council, which sadly contains one or two permanent members who are at peace with mass murder in Syria. So it is not genocide, and the responsibility to protect doctrine is inapplicable. Case closed. We condemn what is happening—indeed, we do so “in the strongest possible terms”—but we are blameless in our inaction and innocent in our apathy.

No one will suggest that the Syrian conflict is without complexity. No one who has partaken of military intervention will recommend it as the course of first resort. No one will deny that even the most moderate of military measures to protect people entail risks: risks to those applying the measures, and risks of escalation. What is routinely denied, however, is the risk and the cost of inaction. It is as if inaction in the face of mass atrocities has no consequences. It is as if the abomination before our eyes is an acceptable, if regrettable, status quo that can only be worsened if we do something. It is as if doing nothing is something other than pumping gasoline onto a raging fire.

Those who would try to hold this Syrian abomination at arms-length warn us that action can have unintended consequences. And yet who among us in 2011 intended that a quarter of a million Syrians would die, that countless others would be terrorized, traumatized, and maimed, that some eleven million people would be driven from their homes, that six-hundred thousand would suffer under siege, denied the basics of nutrition and medical care, and that tens of thousands of men, women, and children would be incarcerated, subject to every indignity imaginable. Who among us intended in 2011 that a vacuum created by Assad regime atrocities would be filled by another band of wanton murderers, one calling itself the Islamic State and one seeking to eliminate the same enemies the Assad regime seeks to erase. If any of us had known in 2011 what we would be facing in 2015, would we have pursued the same policies anyway? Is there anything at all about this abomination right in front of our faces that is anything but unintended?

As we look at these photographs spirited out of Syria by a man courageous enough to risk his life and optimistic enough to believe that the West would act, let us reflect on excuses for inaction offered in the past when the international community has been confronted with governments visiting mass murder on their citizens. What were the excuses then? Good faith negotiations and traditional diplomacy can do the trick if civilians just keep their heads down. Society-wide silence and domestic public indifference all but dictate disengagement. Between doing nothing and invasion-occupation the continuum of intervention is empty. The bloodshed is two-sided: the victims are at least partially to blame for their victimization and the opposition to an oppressive government is feckless. Any proposed Western response will be futile and may do more harm than good. Those who seek intervention to protect civilians are emotional and fail to take into account a system based on interests.

Those were the 20th century excuses. They have carried over seamlessly into the 21st.

Twenty years after the fact we can look back at Bosnia and hang our heads. Decades from now our successors will wonder how we could have been so blind and so paralyzed with respect to Syria. God willing the story they read will end like the Bosnia story: after too much time and too many deaths, the United States and its allies finally acted to protect not only Yazidis and not only Kurds, but Syrian Arabs being set upon by a regime for which no crime was unthinkable.

We owe this man called Caesar our respect and our thanks. His photographs do more than depict business-as-usual in the Syria of Bashar al-Assad. They do more than make us reflect on human lives ended violently and horribly. They do more than record evidence added to the tons of documentation that can someday help try and convict the perpetrators. They do all these things. But they also form a mirror into which we in the West may gaze at our leisure. Do we like what we see? If we do not like what we see, then let us act. If we do not, then death resides in much more than the corpses photographed by this brave and noble man.

Image: (Photo: Reuters. A man reacts as he looks at a gruesome collection of images of dead bodies taken by a photographer, who has been identified by the code name "Caesar," at the United Nations Headquarters in New York, March 10, 2015. The pictures were smuggled out of Syria between 2011 and mid-2013. The exhibition at the UN consists of two dozen images selected from the roughly 55,000 photographs taken in Syria by a former military police photographer - some showing eye gougings, strangulation and long-term starvation - as the conflict in Syria enters its fifth year.)