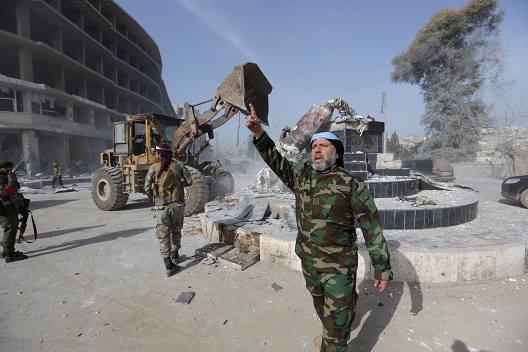 Turkey and Syrian opposition factions took control of Afrin and its countryside after a two-month assault that caused high civilian casualties and the displacement of tens of thousands. In light of an emerging Kurdish-Arab conflict in Syria, some see a Russian-Turkish deal on Afrin and Ghouta as a dangerous indicator at a critical stage in the crisis.

Turkish officials claim that its attack on multiple fronts—resulting in Turkey’s declaration of control over Afrin’s borders on March 18, 2018—targets the Kurdish People’s Protection Units (YPG), which it accuses of belonging to the terrorist-designated Kurdish Workers Party (PKK). Turkey claims its attack is legitimate within the framework of self-defense, referred to in Article 51 of the Charter of the United Nations and the Adana agreement signed with the Syrian regime in 1998.

The images since the beginning of the assault on Afrin show indiscriminate attacks on civilian targets that have caused a new wave of displacement. Perhaps most importantly, the operation shows the emergence of an Arab-Kurdish conflict in Syria. With the progress of Turkey and the Syrian opposition in Afrin, tensions between the Arabs and the Kurds have reached new heights. While the Kurds see it as their right to govern their own areas, Arabs oppose the idea due to the perspective that an autonomous Kurdish federalist regime marks the early stages of a secessionist project.

Before Turkey and Free Syrian Army factions took control, Afrin was home to about a million civilians, about a quarter of whom comprise displaced Syrians from other provinces. Many of the displaced still cannot return to their original homes. As a result, the city has so far witnessed hundreds of victims and wounded, mostly due to Turkey’s deployment of advanced weapons and its rush to advance in strategic locations.

Afrin is located in the Aleppo countryside comprising six districts and 366 villages. It hosts a large Kurdish majority and Arabs, as well as a variety of religious minorities including Christians, Alawis, and Yezidi.

Analysts link Turkey’s advance in Afrin to the Syrian regime’s advance in Ghouta and Idlib, the result of a consensus reached in Astana between Turkey and Russia. The United States and other Western countries remain hesitant about Afrin; the coalition has yet to offer any assistance to its allies, the Syrian Democratic Forces. This scenario is what former US Ambassador to Syria Robert Ford feared when he said the Kurds would pay a price for their faith in America.

Officials attribute the entry of Turkey to Afrin to several factors, primarily the Turkish government’s fear of the Kurdish presence on its southern border. The Turkish government considers Afrin low-hanging fruit in its efforts to prevent the growth of the DFNS and the YPG with no US soldiers in Afrin and the Russian government’s unwillingness to intervene in Operation Olive Branch. The defeat of the Islamic State (ISIS, ISIL, or Daesh) opened the door for the operation’s launch without disturbing the operation against ISIS. Moreover, then-US Secretary of State Rex Tillerson’s speech at Stanford, in which he outlined the administration’s plan and the possibility of long-term support for the Syrian Democratic Forces, obliged Turkey’s offensive.

The fear in Afrin’s model today is the extension of this Kurdish-Arab conflict—especially in light of the footage taken by Syrian armed opposition fighters, showing themselves committing violations, theft, and assaulting civilians—which poses a threat to Syria’s future. The director of the Sham Center for Democratic and Human Rights Studies, Aktham Naisse, described the Turkish attack as contrary to international law and the UN Charter, which states that the sovereignty of a state cannot be violated by another state. Politically, Naisse described the attack as the result of “an international deal aimed at dividing influence inside Syria.”

The conflict in Afrin has ripped the fabric of Syrian society and reveals the underlying conflicts that many analysts have warned about, which now seem to be in a cycle of fighting. President of the National Syriac Council, Bassam Said Ishaq, sees Turkey’s domestic politics as a major factor behind the attack in Afrin. “The ruling Justice and Development Party and Erdogan really want to win in Syria against the Kurdish YPG to appease the Turkish nationalists, which will help him and his party in the upcoming elections,” he said. Noting that the Turkish attack follows ISIS’s crushing defeat at the hand of the Syrian Democratic Forces, he adds, “Erdogan feels that he has to beat these forces to prove his leadership over Islamist forces in the region.” Syrian political writer and dissident, Ghassan al-Mafleh, does not deny that only two years after the revolution began Syria’s streets are filled with Arabs and Kurds looking to fulfill non-Syrian agendas. “The Syrians will be fine with Syria’s future, on the condition that it be without Bashar al-Assad,” he said, and worries that the Afrin conflict will spill the region into an Arab-Kurdish conflict.

Naisse says that the conflict in Afrin will lead to real factional hatred, but Yahya Maktabi, a member of the political body in the Syrian National Coalition (SNC) disagrees. He rejects the argument that the attack on Afrin will affect relations between Kurds and Arabs, a position in line with that of the SNC that supports Turkey’s entry into Afrin. SNC member Yahya Maktabi also sees that there are those who fuel the conflict, but describes it as a conflict between a side that “believes in the revolution” and another—referring to the Kurds— “with its own goals.” He accused the existing authority in Afrin, the DFNS, of being a terrorist party aspiring to secession.

In an attempt to articulate the foundation of the conflict over Afrin, Ghassan al-Muflih mentions two main factors: first, the absence of rights for Syrian-Kurds in the past combined with the Syrian opposition’s failure to manage Kurdish affairs. Second, the practices of the PKK and the YPG since the beginning of the Syrian revolution, where each took a position that he described as “a closer alignment to the regime.” He added that the Turkish attack on Afrin was aimed at extending its influence, which he ties to Turkey’s conflict with the PKK and Erdogan’s desire to find a catalyst for his presidential project.

Al-Muflih criticized the role of the Syrian opposition in the battle and its position on Turkey’s side, describing it as a “strategic and tactical mistake altogether.” He argued that the SNC could act as a mediator in proposing an initiative to avoid war. “Even if it does not bear fruit, it would free the opposition from a conflict between Turkish parties (Turkey and the PKK).”

Kurdish politicians, journalists, and political and human rights activists say that the attack on Afrin has fueled hatred between Arabs and Kurds. The writer and journalist, Massoud Akko, agrees with opposition leaders Ghassan al-Mafleh and Bassam Ishaq in that the battle of Afrin serves the Turkish government’s project in the upcoming elections. He accused Turkey of using Syrian fighters with jihadist leanings in its battle in Afrin to set them up to fight the Kurds.

The situation in Afrin is complicated by the ugly scenes of war: the victims, the wounded, and the flight of civilians from their homes. Opinions differ on how to transcend this impasse. Al-Muflih believes that the solution lies in handing over the city to Russian, French, and British observers, while keeping a local police force and the Afrin local council to administer the area until a political solution is found for Syria. He acknowledges that this solution would require courage from Syrian elites in the search for common ground. Maktabi agrees that Afrin should be run by its people. Aktham Naisse says the solution lies in resisting Turkish intervention and finding a Syrian solution that is not regional or international. Amid all of these divergent opinions, the fate of Afrin remains dependent on the balance of power that will be created by Operation Olive Branch after its completion and the ability of each party to steer this balance to their favor.

Sardar Mlla Drwish is a Kurdish journalist from Syria who specializes in visual, audio, and print media. Follow him on Twitter here @serdar_melah.