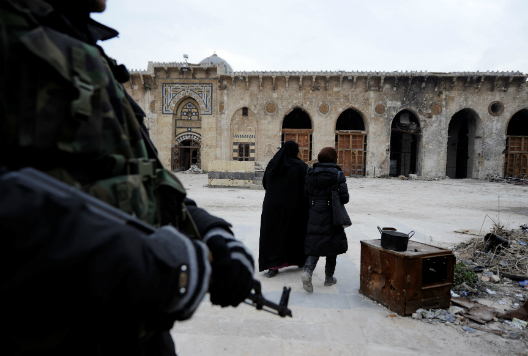 The Syrian conflict has transformed Syrians’ identity by politicizing religion, forcing Syrians to either associate with or disassociate from their religion. To better understand this identity transformation in the Syrian diaspora, I interviewed twenty-seven Syrians that have fled the country. The sample size, although small, included Sunni Muslims, Christians, Alawites, Ismaelis, atheists, and agnostics. The United States Commission on International Religious Freedom commissioned the report.

All the participants expressed some form of transformation in their religious identity. For some it was as drastic as abandoning religion, while for others it was a subtler change in the form of increased spirituality. One participant, a Syrian Sunni woman from Damascus, said:

“In the last two years, I was conflicted on how Muslim I was. I would say I was more spiritual but because I wear the hijab, I am automatically categorized as religious. After leaving Syria, I was exposed to other Syrians from different communities that have also escaped the conflict. We had a common cause, not a common religion. I did not want to change but after traveling more, I became more understanding of other ideas and perceptions. I became more tolerant and, now, I want to defend the right of other religious groups in being part of Syria after the revolution.”

Conversely, another Syrian Sunni woman from Aleppo had a different reaction, “Once I left Syria, my religious identity changed after seeing what happened. I felt that I needed to identify as Muslim for a need to have an identity. Without this identity, I would have felt empty.”

The Syrian uprising initially created a space for people to openly express their religious identity. For example, before the revolution, atheists could not vocalize their lack of belief in God’s existence because people viewed atheists as being morally corrupt and unethical, according to an atheist woman from Damascus. Now, however, she explicitly discusses her religious affiliation to break the stigma against atheists.

As a result of the conflict, Syrians have experienced a deepened sectarian divide that transformed into a political identity. Some participants expressed a newfound pride in their sect and that it gave them a political advantage (for those in the opposition). Many from minority groups in Syria have aligned with the Assad regime out of fear of persecution from radical Islamist groups, whereas those that spoke out against Assad and supported the uprisings have experienced two struggles: joining the opposition and fighting the mainstream thought within their own communities. For example, a Christian participant from Aleppo described how she lost most of her Christian friends because they distanced themselves from her after she participated in peaceful protests against Assad. An Ismaeli participant from Aleppo described his community’s internal dilemma:

When the protests happened, the Ismaeli community was debating where their allegiances were. Some were saying that they should support Assad and others were saying they should support democracy. The community was divided and there was no formal statement by the leaders. The local committee was mostly pro-regime, which caused a lot of frustration in general, and for me personally. It made others disassociate with the Ismaeli leadership. Now, I found myself disassociating with Syrians.

Sunni and Alawite interviewees inserted tolerance caveats when identifying their religious affiliations. Respondents from both groups felt the need to add a clause about their acceptance of different groups. An Alawite man from Damascus responded when asked about his religious identity:

“At the end of the day, we are all Syrian. I am Alawite but I am tolerant of all religions and do not have any animosity towards any group. Living in Damascus, I met people from different sects and I never thought of looking at them based on their religion. I see all religions as equal and I am proud that I am Muslim and I am Alawite.”

Interestingly, a Sunni woman from Aleppo provided a similar response:

“I am religious in the sense that I pray and I fast and abide by the rules of religion. I love to rely on God to help and guide me as opposed to rely on another person. I’m not strict or very conservative; I’m moderate. I follow a peaceful religion. I’m Sunni but I do not have a problem with Alawites or Shia even in the current situation. I judge based on personal interaction. This sectarian divide was only strengthened now but we never identified along these lines.”

Sunnism and Alawism are the two most prominent sects in Syria, the former being largely associated with the opposition, and the latter with the regime. The fact that religious identity has become a political identity is what led them to add statements of tolerance. With the rise of ISIS and fundamental interpretations of Sunni Islam, Sunnis interviewed further felt the need to add statements about being moderate.

Respondents from other communities described different perceptions. The Ismaeli, Christian, and atheist participants were much more assertive in expressing their religious identity and did not add any follow up explaining their moderation or acceptance of others. They recognized that there was some intermingling of different religious groups in urban public spaces, but this was superficial. Despite the romanticized image that all the groups lived together harmoniously, minorities showed that there was a growing fear among the non-Sunni communities that if the regime collapsed then Islamists would take advantage of the Sunni majority and take over the country. This fear translated into an anti-Sunni bias. A Christian participant from Damascus described her experience, “Christianity in Syria and the Middle East is racist and discriminatory, they are Islamophobic.” During her childhood, her Christian community was afraid of Sunnis because they were taught that Sunnis wanted to eradicate them. According to her, it was a common fear among minorities.

Respondents reacted differently to the word secularism depending on how they interpreted it. Those who saw it as the separation of law and religion to make all the citizens equal in front of the law and preserve people’s freedoms were more accepting of the term. Those who were wary of the term defined it as the suppression of religion from all spheres of life and saw religion as something infused in every aspect of their life. Secularism, according to a self-described agnostic woman, is a: “political, social, and cultural battle. People can be ethical and moral without religion but this idea has not reached the religious people in our society… We cannot ignore the fact that our society is conservative and there are many religious people. They should be allowed to live and operate but secularism does not mean that religion will go away.” Respondents were unclear on how to reconcile secularism, religion, and a modern state. Some said the government should rule based on “culture” and not discriminate based on religion. Others said that the laws can incorporate religion, but not all laws can be derived from religion.

Despite how the conflict has intensified sectarian divides, all the participants expressed a willingness to collaborate with people outside their religious communities, saying that extremists from each group do not represent the majority. The participants said that they would feel safe, if not safer, living in religiously mixed neighborhoods and apartment buildings because the diversity would dilute one group from dominating.

The early days of the uprising showed that, in an open space, Syrians are able and willing to assert their identity without imposing it on others, encouraging a national identity to be prominent. The fact that the revolution turned into a war, which in turn politicized religious identity and made it a matter of survival, resulted in many who fled Syria losing their sense of nationalism. Understanding how to recapture that, and how to encourage dialogue on issues of religion and sectarianism, is the key to reuniting Syria.

Basma Alloush is a recent graduate from The Fletcher School and is a Syrian researcher who specializes in the study of diaspora and their role in conflict. She focuses on transitional justice, human security, and post-conflict reconstruction. Follow her on Twitter @samboosa_a.