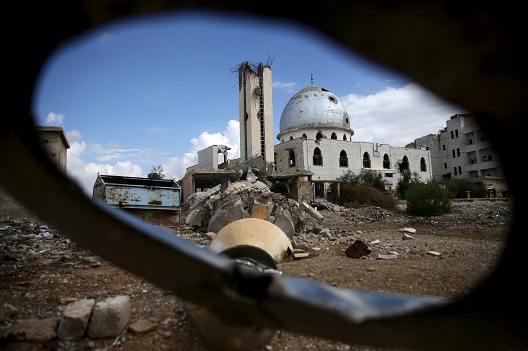 This article interviews four journalists dedicated to reporting on the revolution from its inception as the voices of the truth, and describing working conditions for journalists in a country considered “the most dangerous for journalists.”

Hadi al-Manjid
Age: 30
Birthplace: The village of Deir al-Asafir, in the countryside of Damascus

“In early 2009, I decided to go to Libya to work at a company there. When the events in Libya started, I decided to go back to my country, and help the Syrians stranded in Benghazi by securing them passage over sea to Syria. A few months later, the Syrian revolution began, and I was one of the first people to rise up against the regime.

I was shot in the hand while participating in the sit-in in Douma, and was taken to my home village of Deir al-Asafir. A friend of mine who works in a pharmacy there removed the bullet from my hand. Two days later, I was surprised to learn that Assad’s secret police were searching for me. I was detained and taken to a security branch in the city of Jaramana.

I was detained a second time during Ramadan in 2011, by Air Force intelligence. I was taken to a branch in Mezze and imprisoned for 91 days. After I was released, I decided to help the newly formed revolutionary groups in the area by providing medical assistance and ambulance services.

Eastern Ghouta was in need of journalists to convey images of demonstrations and the crimes being committed by the regime and its Shabeeha, so a few friends and I decided to form a coordinating committee in Deir al-Asafir, and speak to the media under the name Abu Fouad al-Ghoutani. After a few days, the regime discovered what I was doing, and burned down my house. This prompted me to leave for Jordan, fearing for the lives of my family, but my love for the revolution prompted me to return to Eastern Ghouta a few months later, to keep up with the revolutionaries’ victories. I appeared on video on several Arab TV channels, as a witness to the revolutionary battalions’ victories and the crimes committed by the regime.

I was wounded while covering the Otaiba Battle in Eastern Ghouta; aircraft targeted me with cluster bombs, and I suffered light injuries. The Assad regime and Russian aircraft also targeted the Orient News office where I worked three times in a row. I broke my foot, and most of my equipment was destroyed.

The time when Assad’s forces targeted the cities of Eastern Ghouta with chemical weapons was one of the worst memories of my life, when medical stations started asking everyone for help transferring the bodies of the dead. When I got to one of the medical stations to photograph the massacre, I couldn’t believe what I was witnessing: hundreds of children who had died because they couldn’t breathe. I couldn’t move, seeing that image and thinking of what I could have done to save those children who died choking on toxic gas.

That image hasn’t left my mind, and it never will. One of the most difficult moments of my life was seeing the wounded die from the bleeding when there were no doctors or paramedics around.

I will keep working with constant determination to show civilians’ suffering and Assad’s crimes against them, even if it costs me my life.”

“My voice is the voice of all the oppressed and downtrodden who have suffered humiliation under Assad’s rule. His reign has never been humane, not for a single day. He never treated people as if they are citizens, with rights of expression and opinion and the ability to say what hurts them. An unjust, dictatorial rule that turned Syria into a farm owned by him and his family. Sorry to say it, but what are we in his eyes but a flock of sheep to herd however he wants.

I’m a peaceful activist, my pen is my weapon. I’ve followed the news in the countryside of Damascus minute by minute with my own eyes. I’ve worked to convey the events of the revolution on several networks and international human rights sites. I’ve monitored the worst rights violations that cities in Syria have been and continue to be subjected to, especially in the countryside of Damascus. I witnessed the worst chemical massacre perpetrated by the regime, in which thousands of innocent people were killed on August 21, 2012. That’s the most important thing I documented. I also documented many horrific massacres perpetrated by the regime, Hezbollah, Iran, mercenaries from Afghanistan and Chechnya, and militias from Iran, Iraq, and Lebanon.

The regime caused the Syrian revolution to become an armed revolution, in order to convince the international community that it was killing terrorists, but the truth is that terrorism is a product of the regime. The revolution transformed from a peaceful revolution into an armed revolution when revolutionaries were left with no other choice to defend their families and land. There was no other choice when faced with a war machine killing an unarmed people. We raised the banner of our revolution; we don’t need a sectarian flag to defeat the Syrian military. When we offered them water and flowers, they met us with bullets and artillery.

The regime released lots of terrorists from Sednaya prisons at the beginning of the popular movement. It released people who were actually criminals, while claiming they were patriots. Over the years of the revolution, they helped the regime by providing a cover for its crimes, while the regime continued to depict them as the opposition.

We’re a secular country, where people of all religions and sects lived with love. We were neighbors and kinsmen, and we didn’t have any problems with each other. The regime is who created this horrible sectarianism and turned it into a sectarian conflict, with the help of Iran, which wanted to achieve its dream of establishing a Shiite crescent at the expense of the people of the region.

No one among us is calling for Islamic rule. Our dream is to establish a secular country for all religions and sects, just like Syria always was, for thousands of years. We want a country without terrorists from the Islamic State or any group like it, we won’t allow them on our land.”

“The first time I was arrested was in April 2011, after a demonstration on campus at the University of Damascus. My car and everything I had on me was confiscated, and I was subjected to all kinds of torture in the regime’s detention centers. I was expelled from the political science department as soon as I was released from prison, and I started working in the media and following the demonstrations in Damascus and its surrounding countryside. I was still demanding the primary issue: freedom, and to bring down the dictatorial Syrian regime. I consider the Islamic State a terrorist organization, without a doubt, hostile to the principles of the Syrian revolution.

I was detained several times by military groups in the Damascus countryside, and significantly pressured by them, but activists carried out big media campaigns to free me from the military groups’ detention centers.

I hope the demands of the Syrian revolution will be achieved, that it will be victorious, that peace will return to Syria, and that it will be a moderate democratic country that respects human rights and freedoms.”

“It was necessary for us to go out and help the Syrian people to victory in this ordeal they have been suffering from for more than 50 years. For this, we went out and joined peaceful demonstrations that called for reforming the system and getting rid of the corrupt people in it. And how did the regime respond? Live ammunition. More than 40 innocent people were killed in Eastern Ghouta in the first two months of the revolution.

I left Eastern Ghouta and headed for the city of Qudsaya in the Damascus countryside, which had just escaped from the fascist regime’s hold. We transmitted their voices and chants to the wider world, using our cell phone cameras, until the regime decided to enter that area (Qudsaya / al-Hama). Of course, it did this by using all kinds of light and heavy artillery, until these two areas fell into its hands. We were forced to flee to the Wadi Barada Valley, until we decided to go back to Eastern Ghouta. This was at great risk to our lives. We were a group of 40 young men, everyone armed except for myself. I just had my camera and a small hand grenade, to blow myself up so I wouldn’t be captured by the fascist regime if they encircled us. It took more than five months to return to Eastern Ghouta from the Barada Valley, not more than 35 km away. That was because of how dangerous the road was; the regime often ambushed revolutionaries. We eventually made it to Eastern Ghouta, thank God, and started a new life. Most residential buildings had been leveled in the regime’s cruel bombings, in its fascist attempts to control the region. Since then, I’ve moved from one battle to another.

Now, I work as Head of the Media Office for the Council of Syrians platform in Istanbul, as a photographer with the Syrian Revolution Network, and as a reporter for Human Voice.”