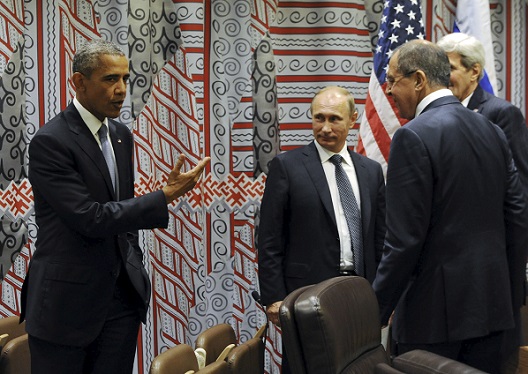 In the midst of a Russian military offensive, a suspended peace conference, and an escalating humanitarian catastrophe, the idea that all of this unfolds in accordance with a secret understanding between Moscow and Washington finds fertile soil in which to take root. It is probably by now an article of faith among most, if not all, Syrians: pro and anti-Assad regime people alike. And although the secret handshake thesis is not the product of idle conspiracy mongering, it is false nonetheless.

In a very real sense the notion of a bilateral, great power understanding on Syria reflects among its believers something resembling grudging respect for the United States. The reasoning seems to be that Russia would not have dared to risk sinking altogether the Vienna peace process it co-chairs without a green light from the United States—the other co-convener of the International Syria Support Group.

The motive assigned to Washington for this alleged betrayal is not altogether otherworldly: it is that the Obama administration allegedly wants Syria out of its in-box for the year-minus left to it. So (or so the reasoning goes), to the extent that Russian military actions force the Syrian opposition to submit to a national unity government deal that keeps Bashar al-Assad in power throughout an open-ended “political transition” phase, the Obama administration can consign a relatively quiet, Assad-dominated western Syria to its successor with a relatively clear conscience. And it can continue the air war against the Islamic State (ISIS, ISIL, Daesh) in eastern Syria.

This hypothesis assumes the willingness of the Obama administration to accept the mother of all foreign policy humiliations: crawling back to Bashar al-Assad for the sake of the battle against ISIL. There may be little or no sentiment in Congress or the general public for pushing back against Russia or making it hard for Assad to exterminate Syrian civilians in wholesale numbers. Still, anything resembling an accommodation with Mr. Assad would expose President Obama to a painful, bipartisan political caning that could dominate his final months in office.

Yes, there is something passive-aggressive about American political culture that may not always translate coherently abroad. Members of Congress who lined up to vote against Mr. Obama’s request to authorize military strikes in the wake of Assad’s largest chemical atrocity (in August 2013) would be among the first to pillory him if he tries to make common cause with the barrel bomber he had called on to step aside in August 2011. And it would not just be Republicans. Already pieces of the president’s Democratic base are breaking off because of his administration’s nearly five-year failure to protect a single Syrian inside Syria from Assad’s campaign of mass extermination: a campaign producing genocide-like results in Syria while flooding the neighborhood and Western Europe with refugees.

It might have been one thing for the administration to tolerate endless processes for the sake of getting to noon, January 20, 2017. But Moscow had a vote. Are believers in the green light thesis also willing to believe that Secretary of State John Kerry was complicit in seeing a peace conference sunk; a conference for which he had twisted arms and offered assurances on ceasefires and civilian protection? It seems that some opposition figures who felt pressured by Mr. Kerry to show up in Geneva are comfortable now with the notion that it was all an act—that the fix was in with Russian Foreign Minister Sergei Lavrov all along.

For a Syrian sitting in Aleppo waiting to join one million of his countrymen under siege, denied the basics of food and medical attention, the question of American intent in all of this rests somewhere between academic and irrelevant. For them the bottom line remains the bottom line: an American administration willing to rescue Yazidis and Kurds from an ISIS onslaught does nothing—absolutely nothing—to protect Syrian civilians from mass homicide undertaken by an Assad regime supported by Iran and Russia. For over ten million Syrians driven from their homes, for tens of thousands rotting in regime prisons, for the countless maimed, terrorized, and traumatized over the past nearly five years, the secret handshake scenario is either obvious or uninteresting. Two-hundred thousand dead Syrian civilians would, if they could, agree.

Still, the secret handshake argument is wrong. Yes, Barack Obama’s failure to afford any kind of protection to Syrian civilians is beyond regret. But he is not the cause of Syria’s agony, and he does not see Russia as the cure. Indeed, he is on the record—most recently on February 16—decrying Russia’s intervention. “The question is, how can we stop the suffering, stabilize the region, stop this massive out-migration of refugees…end the violence, stop the bombing of schools and hospitals and innocent civilians, stop creating a safe haven for ISIS. And there’s nothing that’s happened over the last several weeks that points to those issues being solved.” And he further stipulated that “Russia has been a party” to the shattering of a country that Assad “was willing to shatter.” This does not have the ring of secret collaboration.

What matters is what “we”—the United States, its allies, and its partners—do to counter the homicidal, ISIL-abetting actions of Russia, Iran, and the Assad regime in western Syria. It is not enough to chide Mr. Putin about intervening in Syria as “a testament to the weakness of Assad’s position.” It is not enough to give him Dutch uncle advice about considering the cost of “a country that’s been completely destroyed as an ally that [he] now has to perpetually spend billions of dollars to prop up.” And it is not enough to counsel him that, “What would be smarter would be for Russia to work with the United States and other parties in the international community to try to broker some sort of political transition.”

Mr. Putin does not care a tinker’s dam about Syria, its people, or his miserable client. He will invest not a kopek in the country’s reconstruction. Syria for him is a tool to humiliate Washington, harm the West, and proclaim—mostly for the benefit of a misgoverned domestic constituency—the return of Russia to greatness. Preserving Assad—pure poison for the fight against ISIL—is the key to his goal. His aim is to create an Obama-Assad handshake and get the West to pay for it all.

As an American I am willing to listen to Syrians and others who are deeply angered and aggrieved over what an administration—one in which I once served—has done and failed to do with respect to Syria. Some hard words—incompetence and naïveté, even stupidity and cowardice—are acceptable, even as they hurt and offend. But complicity is untrue. And it is unacceptable.

The kind of cooperation Barack Obama and his Secretary of State seek from Russia requires an end to Russian support of and participation in an Assad regime policy of eradicating human beings. As of now they depend entirely on Mr. Putin’s decency and goodwill. It is precisely this that must change. Otherwise the practical, on-the-ground difference between operational complicity and principled, intellectual disagreement will remain as it is right now: negligible.