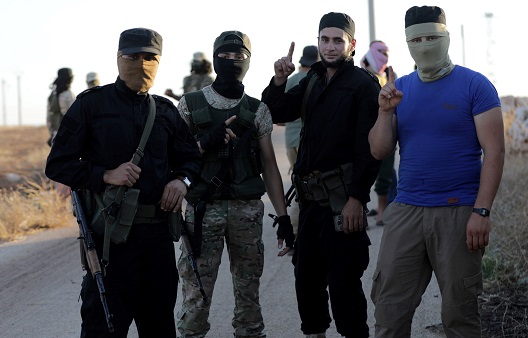 In mid-September, Russia and Turkey signed an agreement regarding Idlib province in northern Syria. The agreement establishes a nine to twelve mile demilitarized zone (DMZ) between the Syrian regime and opposition forces along Idlib’s border. As part of the deal, Turkey pledged to find a solution to extremist groups in the province, withdraw heavy weapons from the region, and evacuate any presence of Hay’at Tahrir al-Sham (HTS)—an independent Salafi-jihadi group—fighters or moderate elements of the Syrian opposition by mid-October.

Russia, in exchange, pledged not to launch any military operations in northern Syria. The deadline has since passed without any accountability for following up on its conditions, namely the removal of HTS, but there are few indications of a large scale offensive at the moment. However, the conditions of the agreement are likely to have far reaching consequences on extremist and opposition groups in the area, should it succeed.

Among the armed opposition groups, only the National Front for the Liberation of Syria (NFL)—which includes moderate opposition factions in Idlib—early on welcomed the agreement. Other jihadist factions—such as Hurras al-Din and the al-Qaeda-affiliated Turkistan Islamic Party—refused to recognize the agreement. By the end of September, HTS still seemed to not have an official position regarding the Russian-Turkish agreement. However, by October 10 reports confirmed that Hurras al-Din and HTS withdrew heavy weapons from the demilitarized zone as specified in the agreement. And an HTS announcement grudgingly supported the agreement right before the Oct 15 deadline passed.

HTS is in a difficult position with limited and complex options. In an exclusive interview with SyriaSource, an anonymous senior military commander in the Syrian opposition—who is not authorized to speak publicly—said that after meetings between Turkey and HTS officials, HTS had “to choose between dissolving itself and allow fighters to merge with opposition factions of their choice, or accept a military confrontation launched by the regime, Russia, and Iran, which may have significant consequences for civilians in the region.”

Idlib now hosts hundreds of thousands of internally-displaced Syrians in camps who refuse to remain under the authority of the Assad regime. In the event of an offensive by the regime, the sheer number of citizens packed into Idlib’s small geographic area would compound the devastation of a regime offensive. HTS integrating with moderate factions would prevent this and an open confrontation with Turkey.

However, HTS could also face internal problems accepting these conditions because of its history fighting these same moderate forces and because this solution runs counter to its founding principles and approach. Over the years, HTS was known to criticize moderate opposition factions over their acceptance of political agreements and negotiations with the regime. Therefore, attempting to merge HTS fighters into those groups would re-ignite hostilities and pose an additional challenge. Integration with moderate forces would also run counter to HTS’s fundamental mission such as refusing negotiations with the regime and its allies and rejecting any cessation of hostilities or even de-escalation.

There are two conflicting viewpoints within HTS regarding the Idlib agreement. The first rejects any dialogue or coordination with Turkey and demands the opening of new fronts with the regime—a group led by foreign fighters such as Abu Yazzan al-Masri. The other is to coordinate with Turkey for the protection of civilians; a viewpoint held by local fighters. Either way, any definitive statement issued by the HTS will deepen already-existing internal divisions.

In fact, it already has. A handful of groups affiliated announced their split with HTS on August 26 and joined Hurras al-Din—a group that rejects Turkey and Russia’s agreement on Idlib. Al-Qaeda linked groups unwilling to accept the agreement, later formed operation rooms intent on smaller escalations and seem to have already conducted several attacks since the agreement was signed. Last week, Ansar al-Din, Ansar al-Tawhid, and Ansar al-Islam joined Hurras al-Din and claimed an attack on the Syrian army in Hama. Faced with this reality, HTS risks pushing more fighters away if it follows through on conditions of the agreement as well as causing major internal schisms.

However, fully accepting the agreement and integrating with the opposition could bode well for HTS. It could help HTS demonstrate a willingness to negotiate with international players and thus carve out a space for its participation in a political process for Idlib that could lead to a local, civil, autonomous government but ultimately lead to HTS’s dissolution. In order to survive, HTS may need to rethink its global jihadist brand and refocus on its Syria agenda.

If hardliners in HTS dismiss the approach of accepting the agreement, the scenario of entering an open confrontation with Turkey and its allied military factions is likely. No matter which path HTS chooses, it will be weakened by internal divisions. This plays well into Turkey’s objectives which could help avoid military intervention if it succeeds in splitting HTS and bolstering the moderate opposition.

As news of the imminent attack by the regime and its allies spread, local demonstrations erupted across the province. HTS attempted to quell the protests by harassing and even arresting some protestors. Istanbul-based activist Abdullah al-Khalid said HTS is under a lot of pressure to “prevent giving the Russians and the regime any pretext to attack the province.”

The agreement seems stable for now and so far has prevented an attack by the regime and its allies. Russia and Turkey seem more intent on the eventual outcomes of the agreement and not the deadline. Both agreed to allow for more time for implementation. However, the identity crisis of HTS, yet again, will define the fate of Idlib: either it will continue its strategy to oppose the conditions of the Turkish-Russian agreement to remain intact, or bow to pressure by fully accepting the agreement, and remove itself from the region to redefine its mission.