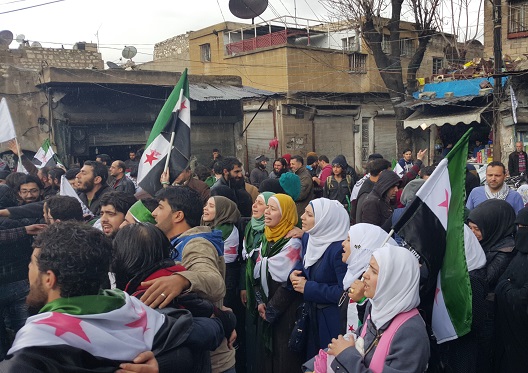 This post is an interview with Kenan Rahmani, a Syrian American political and human rights activist and a member of the Syrian Network for Human Rights. He has traveled regularly to Syria throughout the conflict, his most recent trip being this past March. His observations give us insight into the benefits of the cessation of hostilities (CoH), including increased civil society activity and outspoken resistance of the Nusra Front. The biggest benefiters from the collapse of the CoH are the Syrian regime and extremist groups like the Nusra Front.

Tell us about your last trip into Syria. What was the purpose of your trip? When did you go, how long did you stay, and what places did you visit?

My trip to Syria last month was my thirteenth trip into the “liberated” areas that are no longer under the control of the Assad regime. Of course we cannot say they are truly liberated because there are still many dangerous oppressive threats to freedom and peace. The primary threat to civil society is the tyranny imposed by extremist groups like Jund al-Aqsa and Nusra Front. The secondary threat is the regular aerial bombardment by the Assad regime and Russia on civilians in these areas. During this last trip, I wanted to see how well the cessation of hostilities (CoH) was holding up, what the effects of the CoH were, and how civil society could be empowered to take advantage of the CoH. I was there for one week, and visited Aleppo city, western rural Aleppo, Idlib city, and villages surrounding Idlib city, including Ma’arat al-Numan.

How well was the ceasefire being implemented in the areas you visited?

Very well. During my previous trip in November/December 2015, airstrikes continued nonstop and warplanes never left the sky. It was quite terrifying. During this past trip in March, I did not see any airplanes in the sky and I didn’t come close to any airstrikes either, although I could hear explosions south of Aleppo where hostilities were slowly building up.

How are civil society and local governance groups utilizing the ceasefire?

The CoH restored power to civil society groups. In Aleppo, groups that had gone dormant during the months of intense Russian airstrikes returned to prominence. The most obvious indicator of the rise of civil society was the return of 2011-style protests and demonstrations across the country. In Aleppo, I participated in such demonstrations and noticed a sense of safety and energy that had been absent before the ceasefire. Civil society activists took on new projects. Activists in Aleppo built a stage for children to perform and enjoy the relative calm. They also launched a campaign to teach children about civic duty, and the children took on the project of sweeping the streets of Aleppo. These kinds of activities had halted during prior months due to the intense airstrikes and barrel bombing of the city. The same kind of empowerment of civil society was evident in other villages in rural Aleppo and to some extent in Idlib, but the presence of the Nusra Front in Idlib makes things more complicated there.

What are armed opposition groups doing during the ceasefire?

For the most part, they haven’t given up on the armed uprising. Most of them are joining the protests that are being organized by the civil society leaders. But they were skeptical that the ceasefire would hold for very long, and it seems that now that the ceasefire is falling apart, they will return to the front lines. I was surprised by how desperate the armed opposition was for a break. One would expect that these rebels would not know how to go back to normal life, and would struggle with ceding power to civil society. But it became obvious that most of the rebels preferred peace over fighting. Most of them began in 2011 as protesters or activists before taking up arms, so the resurgence of the protest movement was nostalgic for them.

How is the ceasefire affecting the Nusra Front?

Nusra felt isolated and threatened, and struggled to maintain power under the ceasefire. The Nusra Front is excluded from the ceasefire, unlike all of the other opposition groups, which effectively isolated the Nusra Front from the rest of the rebel groups. This was very threatening to Nusra, so they tried to peel groups away from the ceasefire, starting with Ahrar al-Sham. They were not successful in doing so for a long time. The Nusra Front tried desperately to convince Syrian civilians that the ceasefire was a ploy and to  reject it. But most civilians wanted the ceasefire, even if they spoke out against it, because the war had taken such an immense toll on people. So Nusra found itself very isolated. That’s why Nusra tried to instigate clashes with the regime in southern Aleppo by acting preemptively against regime troop movements, and tried to drag moderate opposition groups into the fray. One could argue that they succeeded in doing so. Not long after Nusra re-ignited the clashes in southern Aleppo, the regime began bombing civilian areas across northern Syria.

In addition to these military dynamics, the ceasefire also exposed Nusra to a new threat: a resurgent civil society and pro-freedom protest movement. The pro-freedom movement, which calls for freedom and dignity for all Syrians, and a pluralistic, democratic Syria, is at direct odds with the Nusra Front’s ideology, which rejects the notion of pluralistic, democratic governance. The tension between Nusra and the protesters materialized on multiple occasions in the cities of Idlib and Ma’arat al-Nu’man. On March 11, the Nusra Front confronted protesters in Idlib and Ma’arat al-Numan. This led to clashes between the Free Syrian Army’s [EM1] 13th Division and the Nusra Front on March 12, which is when I visited the town. That night, the Nusra Front arrested fighters from the 13th Division and seized weapons and equipment. This was one manifestation of the new dynamics between Nusra and the rest of civil society and the moderate armed groups. Throughout all of the rebel-held areas, protesters expressed solidarity with the 13th Division in protests, which further isolated Nusra.

Nusra did try to find ways to take advantage of the ceasefire. First, it is important to note that although Nusra was excluded from the ceasefire, it did not continue to come under attack during the ceasefire. Neither Russian nor US-led anti-ISIS coalition airstrikes targeted Nusra bases in Idlib, even those that are far from civilian areas. For weeks, Nusra did not attack regime forces, so ironically, Nusra also got a break from fighting, although it was excluded from the actual ceasefire. This break gave Nusra some opportunities to take care of other priorities, like cracking down on civil society activists and armed groups that it felt posed a threat. But overall, I believe that the ceasefire is not in Nusra’s interests.

Overall, who stands to benefit the most from the ceasefire?

Civil society benefits the most. Without a doubt, civil activists have been marginalized ever since the revolution turned into an insurgency. Many of them have fled the country because they do not see avenues to continue serving their country. The ceasefire protects these activists and strips away the legitimacy of armed groups. However, the armed groups also benefit from the ceasefire. Months of Russian airstrikes seriously weakened the moderate opposition and its morale. The ceasefire gave armed groups some breathing room to reorganize and recharge their batteries.  To a lesser extent, the Assad regime experienced a similar benefit from the ceasefire. The regime’s ground troops are overstretched and weak, and so a pause in the fighting also benefited regime forces.

Kenan Rahmani is a Syrian American political and human rights activist and a member of the Syrian Network for Human Rights. His parents are from Damascus and he visited Syria regularly during the summers while growing up in Indiana. Since the beginning of the uprising in 2011, he has traveled to rebel-held areas in northern Syria, meeting with and supporting many civil society and aid groups. He has also served as a political advisor to the Coalition for a Democratic Syria. He is currently finishing a JD/MA dual degree in International Law and International Relations at the American University Washington College of Law.

Image: Photo: A peaceful demonstration in Aleppo, taken during the author's trip into Syria. Photo Courtesy of author.