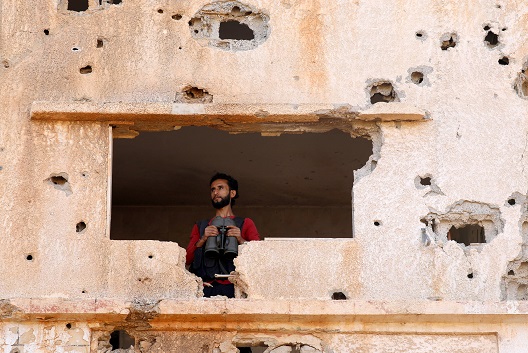 Photo: A fighter from the Free Syrian Army is seen in Yadouda area in Daraa, Syria May 29, 2018.REUTERS/ Alaa al Faqir

With a Donald Trump-Vladimir Putin summit looming, American policy toward Syria may be on the line. Specifically: in an effort to accommodate a Russian counterpart for whom he has high regard, President Trump may be tempted to short-circuit the American-led post-Islamic State (ISIS, ISIL, Daesh) stabilization of northeastern Syria. The silence of the Syrian opposition in the face of this disastrous possibility is deafening.

A successfully stabilized, liberated northeast is the nightmare of Putin, Iran, and the Assad regime. In its most horrifying version it would produce, for the edification of all Syrians, a governance alternative to a murderous, kleptocratic regime. Putin counts on Trump to serve as doorman for Iran and Assad in northeastern Syria.

Nearly six years ago the Istanbul-based, anti-Assad regime, Syrian National Coalition (SNC) was declared “the legitimate representative of the Syrian people” by the United States and its “friends of the Syrian people” partners in a Marrakech conference. Yes, it was the emptiest of gestures by an Obama administration using symbols instead of substance to navigate the Syrian crisis. But the SNC had the option then of taking its title seriously. It still does.

What is required of the opposition now is a clear message to President Donald Trump: “If the United States does its duty to the people of northeastern Syria liberated from the so-called Islamic State, we will be America’s partners in facilitating local Syrian administration reflecting the non-partisan transitional governing body agreed to by the United Nations Security Council Permanent Five in Geneva six years ago. We will work selflessly with local residents – Arabs, Kurds, and all Syrians – to build a Syrian alternative to Assad and his Iranian masters.”

It is understandable that the external Syrian opposition—and not just the Istanbul-based SNC—is deeply depressed by recent developments. This depression may account, at least in part, for the absence of the message cited above.

Russia has fully enabled the Assad regime’s overthrow of the southwestern Syria deescalation zone agreed to in 2017 by Moscow, Washington, and Amman. Mimicking its predecessor, the Trump administration has protested loudly, saying that Moscow would be held “accountable” for this latest example of civilian-centric, state terror “combat” in Syria. Yet all Syrians fully expect Washington to remain operationally inert in the face of civilian slaughter unless (a) Assad uses chemicals or (b) the perpetrator is the Islamic State.

Deepening the opposition’s depression are the public statements of President Trump indicating his strong desire to put Syria and its people in his rear-view mirror, quickly, and completely. This is music to the ears of Assad, Putin, and their Iranian partner. To the opposition (and others) the President’s words suggest that Washington’s role in northeastern Syria may boil down to beating ISIS only to make the place safe for Iran and Assad: parties whose sectarian excesses inspire responses of the Sunni Islamist variety that would neutralize the benefits of having beaten ISIS in the first place.

It is indeed possible that the United States will decide to dodge its post-combat stabilization duties in northeastern Syria, putting the icing on the poisoned cake of American Syria policy: a noxious substance baked to a noisome crisp over the past seven years. But this is not a forgone conclusion, notwithstanding the fact that the city of Raqqa—liberated last October—remains in ruins. And surely it is not appropriate for the Syrian opposition to remain silent as the Trump administration deliberates whether to do its duty or dodge it.

What is required of potential American partners in the arduous task of building an alternative to Assad and Iran in northeastern Syria is NOT a series of argumentative op-eds. What is needed of the Syrian opposition (and not just the SNC) and potential partners in Europe and the region are clear pledges of readiness to do heavy lifting on the ground in Syria east of the Euphrates River. If anything will convince the administration to do its duty to the people of northeastern Syria (and to American taxpayers who have funded nearly four years of combat against ISIS), it will be the realization that this will be far from an exclusively American undertaking.

Elements of the Syrian opposition have already done some significant outreach to the autonomy-seeking Kurds of northeastern Syria. Other opposition elements have worked constructively with Turkey. Some opposition members are from northeastern Syria, and their return could help local councils work creatively with outside powers to stabilize the area and provide for all Syrians an example of decent governance. The opposition can, in short, bring things of great value to the table.

It cannot, however, sit silently in the role of traumatized spectator as momentous events unfold. At the very least, it cannot do so and still pretend to be leaders of or even participants in the Syrian revolution.

No, it is not easy for people based in Turkey or Gulf countries to speak freely. But Washington has negotiated hard and in good faith with Ankara over Syria, perhaps clearing the way for the SNC to speak up. Yet even if it has not facilitated free speech for the SNC, NOTHING should stand in the way of the Syrian opposition expressing its readiness to help the United States administer the “protected” and “no-fly zone” for which it has begged for years.

If the Syrian opposition remains silent and the Trump administration chooses wrongly, who will blame any Syrian for submitting at long last to war criminals and their external enablers? It is one thing for a senior American official to opine that Assad’s political survival is of no strategic import to Washington: a remarkable statement given two military strikes by the Trump administration on regime assets. It would be quite another for the Syrian opposition to evade its own duties.

Frederic C. Hof is a faculty member of Bard Colleges and a senior nonresident fellow of the Atlantic Council’s Rafik Hariri Center for the Middle East.