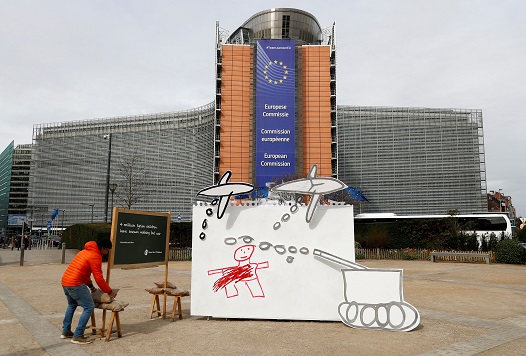 Since the fall of 2018, we have seen increasing signals of disagreement among European Union (EU) member states regarding Syria. The official EU position remains one of non-engagement with the Bashar al-Assad regime until the realization of an “inclusive and Syrian-led political process that meets the legitimate aspirations of the Syrian people”— as stated in the United Nations Resolution 2254 that inspires the EU position. However, some European governments are breaking away from this position and beginning to engage with the Syrian government. Although some degree of political normalization between single EU member states and Damascus is likely in the near future, several powerful factors still prevent any significant European contribution to Syria reconstruction.

In August 2018, Poland sent its deputy foreign minister in an official visit to Syria. Then in January 2019, the Italian foreign minister stated that his government is “considering” reopening Italy’s embassy in Damascus. Additionally, in April 2019 a Hungarian investigative portal accused Hungary’s authorities of granting residency status to a Syrian under US sanctions for assisting the Syrian government. Meanwhile, the Czech Republic has been in stark contrast with the EU policy regarding Syria by maintaining continuous diplomatic relations with the Assad regime throughout the conflict and never closing its embassy in Damascus.

In the past few months, debates have continued about the future role of the EU in Syria’s post-war reconstruction. Some voices began to openly criticize the entire EU strategy of “economic war” against the Syrian regime, while others called into question the effectiveness and legitimacy of some EU sanctions, in particular those blamed for complicating the influx of basic goods and humanitarian aid into the country.

Estimate costs for rebuilding the infrastructure and economy to pre-war conditions are between $200 and $400 billion. For any positive impact on the country’s future, several donors must contribute with tens—if not hundreds—of billions of dollars over the next five to ten years. It is unlikely that European countries will be among these generous donors—at least not for the foreseeable future—due to four main factors:

First, the issue of economic sanctions. No real participation of EU entities in the reconstruction process is possible as long as European sanctions remain. The EU recently increased the number of sanctioned individuals in January 2019. The debate continues over the feasibility of European sanctions and the consequences on companies and organizations operating in Syria; even humanitarian based. Many argue that sanctions are exacerbating the population’s suffering while unlikely to ever accomplish its stated aim; which is to force a transition of power leading to the end of Assad’s rule. Such arguments are increasingly supported by anti-Assad voices and are likely to shape the debate in view of the sanctions’ annual renewal scheduled for the beginning of June.

However, it is unlikely the EU will favor a new position in the next few weeks. According to a European diplomat involved in the EU policy on Syria, who spoke on the condition of anonymity, this year the renewal is likely to pass and any real discussion will be postponed to 2020. This could give European diplomats time to verify the feasibility of a policy change, especially through dialogue with Moscow. Furthermore, even if EU sanctions were removed, EU entities operating in Syria would be still subject to US sanctions, which are unlikely to be removed anytime soon. On the contrary, they seem likely to be intensified. This additional factor—even in the case of the complete removal of European sanctions—is likely to curb participation of major European companies in reconstruction projects.

Second, although sympathizers of the Syrian regime are increasing within European governments, it is unlikely that any of them will engage in a diplomatic war for the sake of Assad. Countries such as Poland and Italy that showed support for political normalization are not the most financially stable and/or politically influential within the EU.

Poland and the Czech Republic are relatively small economies, endowed with rather limited resources for external economic projection. Even Italy, on paper the third largest economy of the block, is going through a period of economic and political turbulences. Although on multiple occasions representants of both parties composing the current ruling coalition have expressed their sympathy for the Assad regime.

In the short-term, Rome may be reluctant to pay the political price of openly defying the EU official position on Syria. At the end of 2018, Rome engaged in intense bargaining to have its budget approved by the European Commission. A new round of negotiations is expected to occur by the end of this year, since most of the budget targets requested by the EU are unlikely to be met. Hence, it is unlikely that Rome will open another confrontation with Brussels over Syria. On the contrary, it is plausible that Italy will bargain its stance over the sanctions on Syria—and, for that matter, over those on Russia—in exchange for a softer position on its budget deficit.

Third, the issue of the return of refugees—the main argument used for a European role in Syria reconstruction—is losing steam. Over the last two years, Russian diplomats continued to emphasize that to encourage Syrian refugees in Europe to return, the EU should pay for reconstruction. Although immigration issues are a central topic in today’s European politics, the specific subject of Syrian refugees is mostly absent in domestic debates; even in countries where immigration is a central theme such as Italy and France.

A notable exception is Germany, where Syrian refugees were a central topic in the 2018 electoral campaign. However, over the last year the new balance of German politics—with the “refugee-friendly” Green Party growing faster than the nationalist, anti-immigration AFD—point at a diminishing importance of Syrian refugees on the domestic debate. On the contrary, Germany has renewed its tough stance toward the Assad regime by continuing to seek legal recourse for regime members for human rights violations.

Fourth, the Assad regime is not exactly enthusiastic about the prospect of Europe playing a major role in post-war Syria. Damascus is very vocal regarding the removal of sanctions, while it is mostly Moscow that is pressuring the EU to directly support the reconstruction. On multiple occasions, Assad stated clearly that he does not want Westerners to take part in the rebuilding of the country.

This may seem irrational given the huge financial requirements estimated for the reconstruction and the impossibility to obtain significant support from allied governments. But the Assad regime does not intend to restore Syria to its pre-war state. Instead, it aims to continue ongoing institutionalized demographic change of the Syrian society and state into smaller and more malleable entities for the regime to manage. Measures introduced by the Syrian government over the last year—aimed at expropriating refugees abroad and compelling them to undergo complicated vetting processes to be allowed to return—point in this direction.

However, European governments and institutions can still play a positive role in the country’s future by reassessing the conditionalities attached to the EU sanctions in light of the current status of the war. The removal of sanctions could be attached to more realistic goals than the end of Assad’s rule, such as the establishment of international monitoring over the regime’s prisons and solider security guarantees for the millions of Syrian refugees wishing to return home.

The debate on this issue is still open and we may witness a change of the EU strategy over the next months. However, while some steps toward political normalization with the Assad regime and relaxation of the EU sanctions are conceivable medium-term developments, no exorbitant amounts of European money is likely to be spent on Syria in the foreseeable future.

Eugenio Dacrema is research fellow at the Milan-based Institute for International Political Studies (ISPI) and PhD candidate at the University of Trento.

Image: Photo: A 3D drawing by a Syrian girl, showing scenes of conflict, is pictured ahead of an international peace and donor conference for Syria, outside European Union institutions in Brussels, Belgium March 12, 2019. REUTERS/Francois Lenoir