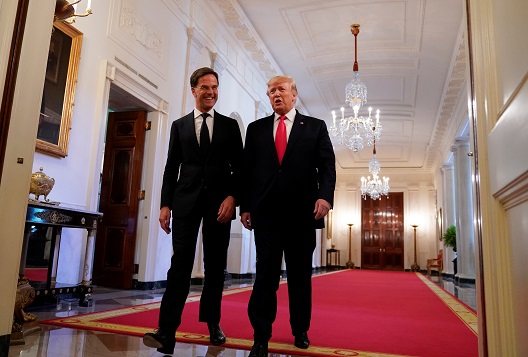 As the women’s national soccer teams battled it out for the World Cup title in early July, another clash was taking place in the political realm between the Americans and the Dutch over the latter’s military contribution in Syria. The recent visit by Dutch Prime Minister Mark Rutte to the White House demonstrates that despite increased pressure––mainly exerted by US Ambassador Pete Hoekstra––the Netherlands is unlikely to offer the desired level of military support in the near future due to internal political concerns, military ennui, and diverging perspectives on Middle East policy.

In late May, the US officially asked the Dutch government to partake in a new military mission in Northern Syria to avoid the development of a power vacuum in the region. According to sources in the Hague, as part of the proposed operation the Dutch were requested to resume air strikes, repatriate Dutch Islamic State (ISIS, IS) fighters and their offspring, and provide non-lethal aid to the Syrian Democratic Forces (SDF). The American ambassador to the Netherlands sought to place additional pressure on the Dutch government to comply with the request by repeatedly invoking its criticism of the partial US withdrawal from Syria in December 2018.

Hoekstra’s desire to enter into a public confrontation with the Dutch is not new. Prior to his arrival in the Netherlands, he spoke of the supposed chaos brought into the country by immigrants from Islamic countries––comments which drew ire from the Dutch, particularly after the ambassador derided them as “fake news,” comments he later apologized for.

More recently, Hoekstra lambasted the Dutch for failing to meet the recommended defense spending target of 2 percent of gross domestic product in accordance with the 2024 target set by NATO allies in Wales five years ago. Hoekstra rejected subsequent accusations of mingling in Dutch affairs: “If Dutch politicians are offended by my comments, it would have been fair that the US had also been offended by the sharp Dutch criticism of the [US] withdrawal from Syria. But we weren’t.”

Indeed, when US President Donald Trump announced a major withdrawal of the US military from Syria last year, the Dutch were among the staunchest critics. Stef Blok, the minister of foreign affairs, argued that the withdrawal could lead to a change in regional power dynamics and new rounds of fighting. The minister of defense, Ank Bijleveld, criticized the administration’s self-declared complete victory over ISIS in the face of the ongoing presence of thousands of ISIS-fighters in Iraq and Syria.

The criticism voiced by the Dutch, both from the government and parliamentary members, according to Hoekstra, led to a redevelopment of US strategy in Syria. The new, US-proposed “security mechanism” seeks to create, in Hoekstra’s words, “a proper [military] presence” and––together with some thirty allied states––“ensure that IS does not regroup in Syria and resurface in Iraq.”

As part of the global anti-ISIS coalition, the Dutch took part in a military mission in Eastern Syria and Iraq between 2014-2018; a total of 3,000 combat missions were carried out with F-16s. Despite the initial “readiness” of the Dutch government to offer a renewed participation in Syria, both the parliament and government have proved reluctant. With the (relative) stabilization of Syria and the near-eradication of ISIS, the 2014 UN mandate that enabled prior Dutch military participation, according to Bijleveld, is now lacking––a stance rejected by the US ambassador.

In the absence of a consensus on a pre-existing mandate and the likely failure of a new UN mandate in the Security Council, the government will be required to provide the legal impetus for a military engagement. While the Dutch constitution––and specifically Article 100––dictates that the government can make such a decision unilaterally, in practice, parliamentary consent is considered paramount.

The recent Dutch departure from Mali will likely add to the lack of political animus for a mission in Syria. A report published last year by the government found that the Dutch military was unable to perform optimally due a lack of sufficient training and material––both a direct consequence of repeated cuts to the defense budget. In late June, Bijleveld noted that the poor military performance in Mali means that the “army is currently in recovery mode.”

The Dutch government’s negative stance towards a repatriation of Dutch ISIS-members from Northern Syria equally means that it is improbable that it will comply with the US request to readmit these fighters in an effort to relieve Kurdish authorities. Citing security threats, the Dutch government previously indicated its objection to the repatriation of Dutch ISIS-affiliated fighters and their families.

The government’s outlook on the repatriation of the so-called “Syriëgangers”––men and women who travelled to Syria to fight in the civil war––is indicative of Rutte’s campaign pledge to let “Dutch Jihadists perish in the desert before allowing them to return to the Netherlands.” A rescission of this stance would invite further criticism from right-wing opposition parties. Accordingly, a court order demanding the repatriation of five Dutch women held in Syrian-Kurdish refugee camps to the Netherlands––in order to conduct judicial proceedings––has been ignored since January. The government has––thus far––also not accepted an offer made by the Red Cross in April to help repatriate the approximately eighty-five children of ISIS fighters held in camps.

In the face of a likely repudiation of the American call for military engagement in Syria, the second request for a Dutch marine patrol––in the form of a frigate––in the Strait of Hormuz to secure the waterway and, with that, twenty percent of the global oil supply will carry extra weight. Nevertheless, here too, diverging political perspectives will prove an obstacle. In mid-July, Blok indicated his resistance to a confrontation with Iran, which has seen tensions rise with the US since the latter unilaterally withdrew from the Iran nuclear deal in 2018 and reinstated sanctions on Tehran.

Rutte has demonstrated a rare penchant for his willingness to publicly challenge the US president in his attempts to undermine pre-existing international cooperation and alliances. In the face of ongoing US criticism of transatlantic trade deficits and insufficient defense spending among European NATO members, however, a complete rejection of the latest requests might be harder to convey.

Grace Wermenbol is a Non-Resident Scholar at the Middle East Institute. She previously served as a lecturer on the Israeli-Palestinian conflict at the University of Oxford. and was a researcher at Oxford’s Department of Politics and International Relations. She holds a Masters and PhD from the University of Oxford, where her research focused on the Israeli-Palestinian conflict.